'If You Ever Want To See Him Alive…Come Immediately': A Race Against Time For An Irish Soldier's Wife

'If You Ever Want To See Him Alive…Come Immediately': A Race Against Time For An Irish Soldier's Wife

Felix Mooney was 53-years-old when he enlisted in what became Company D of the 61st New York Infantry on 12th August 1861. Wounded at the Battle of Malvern Hill on 1st July 1862, he was taken prisoner and sent to Richmond. By the time he was exchanged on 27th July he had to be sent straight to hospital, having developed chronic diarrhoea. On 11th September his wife of almost six years Mary (née McGinty), received the following extremely concerning note from Felix’s nurse:

By request of your husband I write these lines to you he requested that if you ever want to see him alive to come immediately to this place he is very low indeed he says there is over 4 months pay due him so that you can have that to pay all expenses hereafter. I don’t think he can live long at the longest but I will try and do the best I can to keep him alive until you shall see him if it is possible but you will have to come soon as you get this don’t fail to come if posible. No more at present,

From M. O. Sutton the Nurse of Felix

Go to Baltimore and procure a pass from Gen. Wool (1)

Felix’s former comrades of Company D, 61st New York Infantry, as they appeared in the Spring of 1863 (Library of Congress)

Only three days before Felix had sent his wife a letter, most probably dictated by him to Nurse Sutton:

I now have a few lines written to you to let you know that I have got those things you sent me it was 6 days getting to mee and all was spoiled except the brandy. The chickens milk tobacco all was sented with the chickens so I had to throw them away it was to bad but it can’t be helped. Now I am still pretty low with the dirahea I wish they would send mee to New York Hospital so that you could come and see me before I die. I guess they will send me before long I am very weak indeed dear Wife but I still have hopes of getting well so to join my family once more I want to see you all very bad once more. Give my love to Ann and Patrick. Write after to me I thank you kindly for sending those things to mee although they were spoiled it was not your fault. I don’t think of much to write to day so I will close for to day. Write after,

I Remain Until Death,

On receipt of the note from Nurse Sutton, Mary immediately set out for Newport News in company with her brother. When they reached Washington her brother could not receive a pass to go through the lines, so she was forced to travel on alone. In what must have been exceptional effort Mary arrived in Newport News on 16th September, only five days after the note was sent. Despite her haste, she was too late. Upon arrival she was informed that Felix had died the previous day, and had his body had already been buried. The newly widowed woman left Virginia the same day, for her lonely return to Brooklyn. (3)

New York Adjutant General 1893. Annual Report of the Adjutant-General for the State of New York. 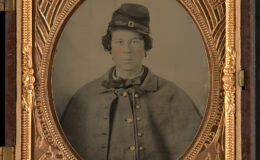 A Condemned Man: A Tyrone Emigrant’s 1860s Journey Towards Execution