“The Crashing of the Volleys and the Wild Irish ‘Hurroos'”: An Irish Brigade Veteran Remembers Gettysburg, Fifty Years On

“The Crashing of the Volleys and the Wild Irish ‘Hurroos'”: An Irish Brigade Veteran Remembers Gettysburg, Fifty Years On

The 1913 Anniversary of the Battle of Gettysburg witnessed the largest Civil War veteran’s reunion that ever took place. Although thousands of former Union and Confederate soldiers attended the event, the numbers of those who had fought through the war had started to tumble. The Irish Brigade was represented by only a handful of men at the fiftieth anniversary, something that made their experiences noteworthy in some of the contemporary press. In California, the San Francisco Chronicle took the time to interview one of the survivors who made the trip- Thomas McGrath.

Thomas McGrath was born in Waterford City around the year 1840. He had emigrated to New York in 1858, where he was working as baker when the Civil War broke out. In December 1861 Thomas decided to throw in his lot with his fellow Waterford native Thomas Francis Meagher. Joining the 69th New York, he first became a private in Company D  before being transferred to Company B in June 1863. His only wound of the war came at Gettysburg, but he recovered and was promoted to Corporal before year’s end, when he also decided to re-enlist as a veteran. By the time the Overland Campaign commenced he had risen to Sergeant. Although he was captured in the debacle on the 69th’s picket line outside Petersburg on 30th October 1864 he was exchanged and mustered in as a First Lieutenant in February 1865, the rank at which he left the army. (1) 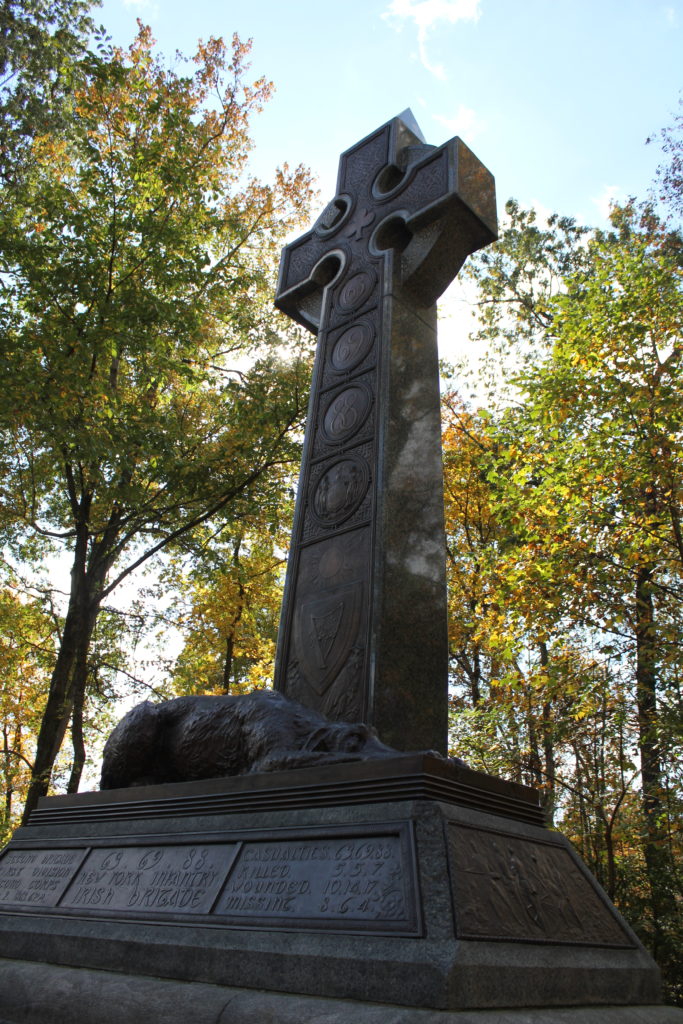 Thomas had been with the Irish Brigade from practically it’s first moment to it’s last. After the war he moved to California, finding work as a clerk. His wife Kate, also an Irish native, was a public school teacher. He was active in the Grand Army of the Republic, and had made sure to attend as many reunions as possible. By the time of the 50th anniversary of Gettysburg, he was one of the best known Irish veterans in California, part of the reason he was interviewed by the Chronicle:

Gettysburg in July, 1863, when the guns of the Union and Confederate forces belched death at each other, and when the fields were strewn with corpses, some clad in blue and some in gray-Gettysburg at the twenty-five year anniversary in the July of 1888, and the the fifty-year anniversary of July of the present year of grace, when the only smoke that rolled across the ground was that from the bivouacs where Union and Confederate veterans fraternized and refought old fights-what a difference, and yet in the person of Captain Thomas F. McGrath, now employed in the depot quartermasters’ office in this city, there is a human link that spans the years, is one who speaks of both Gettysburg’s as one having authority, for he has been at both.

It was as a private in the Irish Brigade that Captain McGrath saw the first Gettysburg, the field of civil strife; it was as a Union veteran that he saw the last Gettysburg, of the month just passed, where the tents of the one-time foes were pitched in peaceful proximity.

Included in the Irish Brigade of the action of July 2, 1863, were the Sixty-third, Sixty-ninth and Eighty-eighth New York Volunteer regiments, the Twenty-eighth Massachusetts and the One Hundred and Sixteenth Pennsylvania. At the reunion this year a handful of nine or ten were all that were left of that brigade to answer the roll call; the rest had nearly all passed out for the last muster.

Among the gallant old remnant were Brevet-Colonel James J. Smith of the New York Sixty-ninth Regiment, now of Cleveland, O.; Captain John R. Nugent of the Sixty-ninth, New York; Lieutenant Richard Bernigham of the same regiment, Captain W.L.D. O’Grady and Comrade Buckley of the Eighty-eighth New York; Patrick Tumulty, uncle of the President’s secretary. California was represented by Captain McGrath, who paid his traveling and incidental expenses out of his own pocket, the State not furnishing him with one cent for the purpose.

“The United States, though, did itself proud in its assistance to the reunion,” said Captain McGrath, gratefully reminiscent. “Great credit is due those who had the arrangements in hand. Everything was carried out with mechanical precision, the camp was laid out by rule of survey, wells were sunk, and the lanes numbered and lettered, while each tent bore its distinguishing number. Boy scouts were on hand to run with messages, and to carry our packages and bundles; in fact, it seemed as though everything that could make for our comfort and well-being had been thought of, and I would like the Government and those in charge to know that we are grateful.” 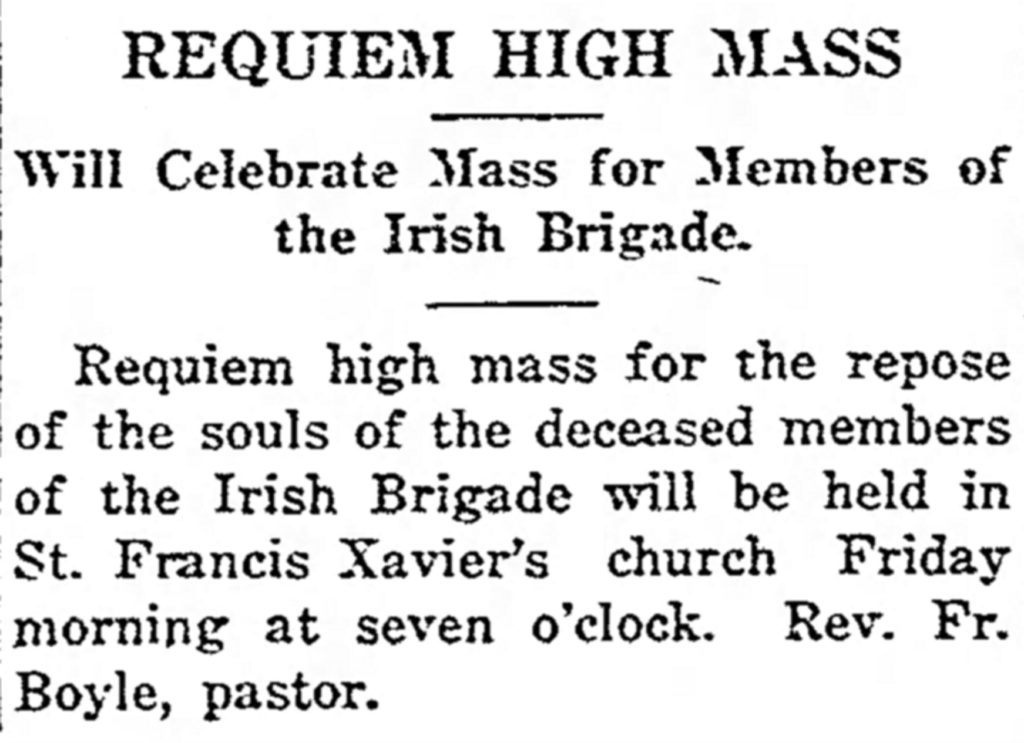 HARKS BACK TO WAR TIMES.

Reverting to the first Gettysburg, Captain McGrath told how each of the regiments of the Irish Brigade bore a green standard in addition to the national flag. Their commander was Colonel Patrick Kelly of the Eighty-eighth New York Volunteers, their first action being fought on the afternoon of the second day of the famous battle, July 2, 1863.

The First division of the second corps, commanded by Hancock and including the Irish Brigade, was ordered to the assistance of General Sickles, who had sent out a call for reinforcements, as his men were being pressed back by Longstreet from the position they had taken. Before the men of the Irish Brigade went under fire, their chaplain, Father Corby, with a boulder for his pulpit, made an impressive address to the men, exhorting them to remember the great issue that hung upon the fight.

“Victory or defeat depends on you men, individually and collectively,” said the priest. “It depends upon every one of you whether the Union forces are to be this day victorious. To this end each of you must, and I pray will, do his utmost duty to his country, his honor and his cause. In conclusion, I would beg you not to forget your duty to Almighty God. To him, also, you owe allegiance and service.”

Then the words of absolution were pronounced for those who would not see another sun rise. General Hancock and others, non-Catholics, who were present, raised their hats in token of respect, and a few minutes later the brigade moved from its position with the second corps near Cemetery Ridge, crossed an intervening wheat field and fell upon the Confederate foe at The Loop, Rose Farm and The Woods, where today a Celtic cross stands to mark the ground where the three New York regiments, the Twenty-eighth Massachusetts and the One Hundred and Sixteenth Pennsylvania Regiments went into action.

On July 3d the Brigade took up a position on Cemetery Ridge, which they held when the famous Pickett’s charge swept down upon the men in blue.

“Our general knew the reptation of the Irish in a fight,” said Captain McGrath with a flush of pride as he recalled the incident of fifty years ago. “We only had smooth bore guns, the charge of which was ball and three buck shot. Such weapons were of no use except at close quarters, and it was because they knew that the men of Erin would soon get to close quarters that they were served out to us. I shall never forget the hideous ‘din of the fight, the crashing of the volleys and the wild Irish ‘Hurroos’ as we clashed with the troops of the grey.”

That advance was successful and the Confederates at once began to fall back, the brigade advancing at a walk as they did so.

Returning to more peaceful times, the captain told how at the twenty-five year anniversary of Gettysburg the Celtic Cross already referred to was dedicated and unveiled. Father Corby, the priest who exhorted the men just before the fight of July 2, 1863, was also present at the 1888 reunion, as was Father Ouillet, the French-Canadian chaplain of the Sixty-ninth New York regiment. Mass, celebrated by the two intrepid priest, was held on that occasion in the Catholic Church at Gettysburg and attended by the survivors. That was the first large reunion of the veterans of the Blue and the Grey. Among those present were the survivors of Pickett’s notable brigade. The story of the recent fiftieth anniversary has already been told.

Many of the little incidents in the great fight were missed by Captain McGrath, who was severely wounded in the head early in the action. But today neither the effects of that old wound nor his years of honor press hardly upon him, and he looks fit to fight Gettysburg over again in reality as he has done in words and reminiscence. (2)

Although Thomas’s recollection had some inaccuracies, and he took pains to accentuate the Irish contribution, neither point is surprising given the passage of time and the context of the interview. Thomas continued to play a leading role in California’s veteran landscape for a number of years after the fiftieth anniversary at Gettysburg. In September 1921 he was officially accompanied across San Francisco Bay by the Knights of St. Patrick as he went to join other surviving veterans at the Grand Army of the Republic Annual Encampment in Indianapolis. By that time his wife Kate had passed away, and Thomas himself died on 17th February 1923. He is buried in Holy Cross Catholic Cemetery in Colma, San Mateo County, California. 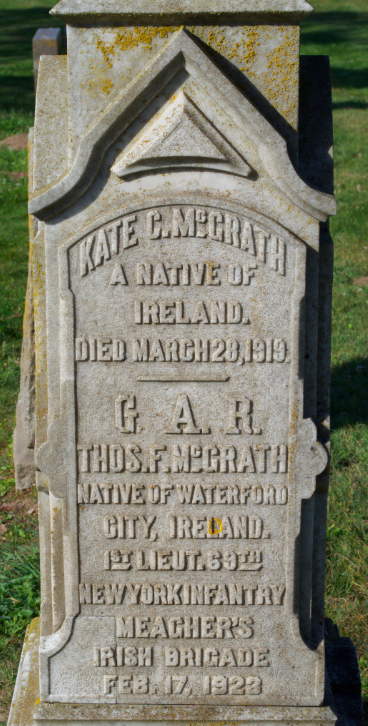