A Walk Among Storied Tombstones: The Irish of Arlington National Cemetery

A Walk Among Storied Tombstones: The Irish of Arlington National Cemetery

Of all the National Cemeteries in the United States, none is more famed than Arlington, the premier military cemetery in America. Established on the former grounds of Robert E. Lee’s Arlington Estate, it has come to be regarded as the most hallowed ground in the United States. Among the more than 400,000 people who rest there are servicemen and servicewomen from all the conflicts the nation has been engaged in since the American Civil War. It is also where some of the country’s most famous individuals are interred, perhaps none more notable than President John F. Kennedy. Among the graves are large numbers of Irish Americans. This post takes a look at the stories of just a handful with connections to the American Civil War. Included among their number are Medal of Honor recipients (including the only one from that conflict ever buried in Ireland), senior officers, Papal veterans, Fenians, and soldiers whose military stories continued into the Spanish-American War and “Boxer Rebellion.” My previous work on one has led to a pub being named in his honour in his Co. Cork hometown. Perhaps the most poignant story is that of an Irishman whose life came to an end amidst the despair of loneliness and depression. This is the latest in the ongoing “Storied Tombstones” series– you can read some of the others here: Cambridge American Cemetery, Annapolis National Cemetery, Fredericksburg, Cold Harbor & Antietam National Cemeteries, and Glasnevin Cemetery Dublin. The grave of Martin Conboy, Arlington National Cemetery. Born in Co. Roscommon, the 37th New York “Irish Rifles” soldier was awarded the Medal of Honor for his actions at the Battle of Williamsburg, Virginia, on 5th May 1862. His citation reads: “Took command of the company in action, the captain having been wounded, the other commissioned officers being absent, and handled it with skill and bravery.” He died in 1909. (Damian Shiels) John Coughlin was born in Vermont to Irish emigrant parents. A Lieutenant Colonel in the 10th New Hampshire Infantry, he was awarded the Medal of Honor for actions at Swift Creek in 1864. His citation reads: “During a sudden night attack upon Burnham’s Brigade, resulting in much confusion, this officer, without waiting for orders, led his regiment forward and interposed a line of battle between the advancing enemy and Hunt’s Battery, repulsing the attack and saving the guns.” He was breveted a Brigadier-General for his service during the conflict (Damian Shiels) The grave of Martin Kelly of the 182nd New York Infantry (69th New York National Guard Artillery), part of Corcoran’s Irish Legion. Martin was a First Lieutenant when he was mortally wounded during actions near Spotsylvania Court House on 18th May 1864 (Damian Shiels). John Joseph Coppinger was one of the most accomplished Irish soldiers to travel to the United States. Originally a member of the Papal Battalion in Italy, he served the Union through the war and was badly wounded at Second Bull Run. He stayed in the army after the conflict, and rose to become a Brigadier-General. I wrote about his remarkable career at my Midleton Heritage site, which you can read here. In a first for me, my research on him caused a pub in Midleton to name their premises after him! (Damian Shiels) John Joseph Coppinger pictured during the American Civil War, when he was on the staff of General Torbert (Library of Congress) Henry J. Reilly had enlisted in the ranks of the 5th United States Artillery in 1864, fighting through the final months of the American Civil War. He rose to the command of a battery during the “Boxer Rebellion” in China, where his guns played a key role in the engagement at Peking in 1900, when he was killed. His death was major news in the United States and was widely reported. You can read more about his career here (Damian Shiels) 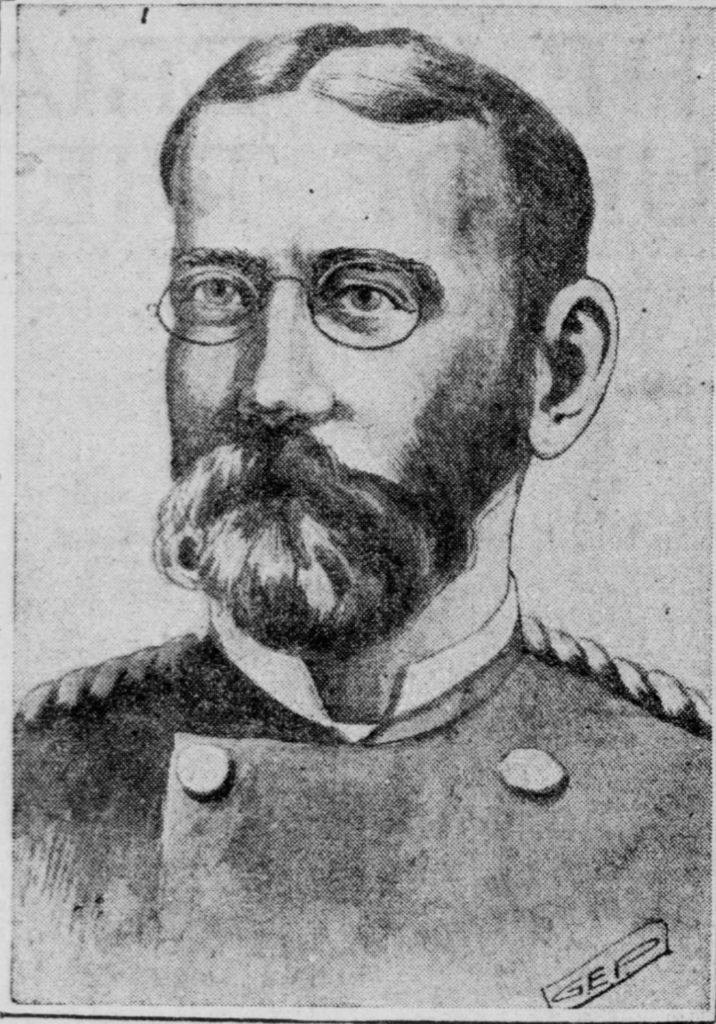 The Civil War Unknowns Monument. It contains the remains of 2,111 soldiers recovered from Bull Run and the route to the Rappahannock. It is unquestionable that there are Irish among their number. The brainchild of Montgomery Meigs, it was originally dedicated in 1866 (Damian Shiels) There are few sadder stories from Arlington than that of Irish veteran of the American Civil War Simon O’Kane. Born around 1842, he served through the Civil War as Captain of Company G of the 17th Wisconsin Infantry, an ethnic Irish unit. After the conflict he was a claims agent, and spent a lot of time in Soldier’s Homes. By the time he reached his early fifties he was feeling increasingly isolated and struggling for support. When he received news that he may not get a position in the Hampton Soldier’s Home, he decided to take his own life. He was found hanging from a tree at Woodside, Maryland, beside a branch of the Baltimore & Ohio Railroad in October 1896, and afterwards buried at Arlington (Damian Shiels) Artist’s sketch of Simon O’Kane which appeared alongside news of how he died, from The Evening Star (Washington D.C.) on 13th October 1896. The newspaper provided extensive details on the heartbreaking circumstances of the poor man’s death (The Evening Star) The Gleason brothers were prominent Fenians (both were arrested in Ireland in 1866) and accomplished officers during the American Civil War. From Borrisoleigh, Co. Tipperary, John had served in the Papal Irish Brigade in Italy in 1860. He fought with the 69th New York State Militia at Bull Run, and afterwards became an officer in the 63rd New York Infantry, Irish Brigade. With that regiment he rose to Lieutenant-Colonel, and was brevetted a Major General on 13th March 1865. His brother Joseph also served in the 63rd New York, rising to Captain before war’s end (Damian Shiels) Michael Emmet Urell was born in Nenagh, Co. Tipperary in 1844. A member of the 2nd New York State Militia (82nd New York Infantry), he served through the Civil War from First Bull Run onwards. At the Battle of Bristoe Station on 14th October 1863 he was badly wounded during an action that would later see him receive the Medal of Honor. His citation reads: “Gallantry in action while detailed as color bearer; was severely wounded.” He served as an officer in the Spanish-American War, fighting in Santiago and becoming Colonel of the 2nd Infantry, District of Colombia National Guard. Afterwards he was Commander in Chief of the National Army and Navy Spanish War Veterans and a Department Commander in the Grand Army of the Republic. He was visiting Ireland when he died in Cork in 1910. He was initially buried in his ancestral family plot at Kilkeary, Nenagh, Co. Tipperary–the only Irish Medal of Honor recipient from the American Civil War ever identified as being interred in Ireland. Though there was some initial dispute as to his final wishes, his remains were ultimately disinterred and removed to the United States for burial in Arlington (Damian Shiels) The question of where Urell would rest was the subject of significant media attention in the Washington D.C. newspapers. This from the Evening Star of 30th September 1910 (Evening Star) 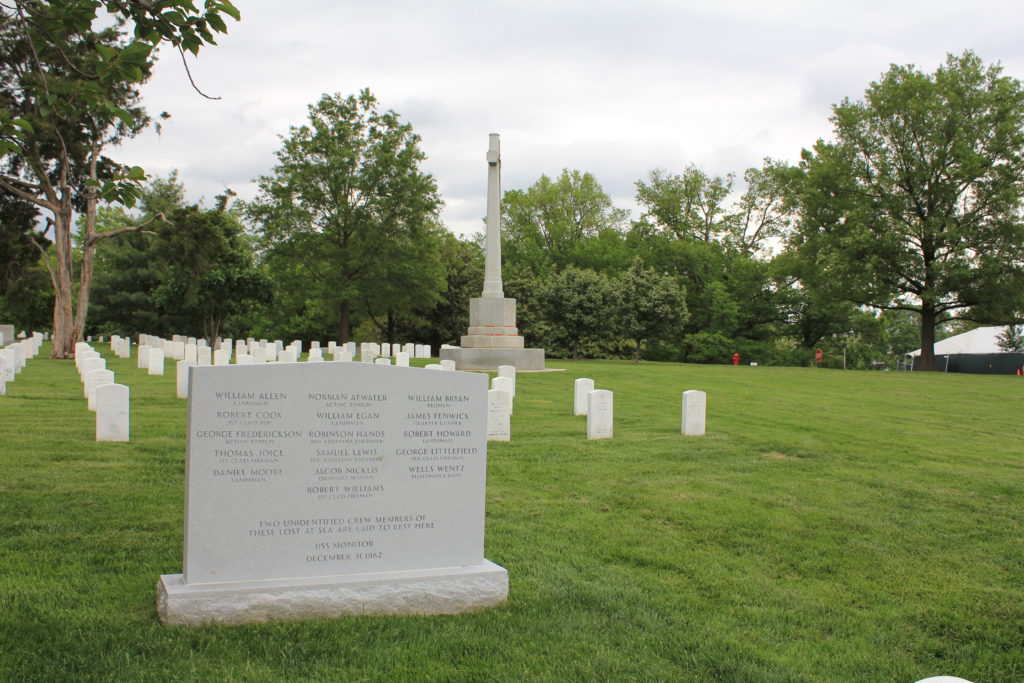 The famed Union ironclad USS Monitor was lost in rough weather on 31st December 1862, with the loss of sixteen crewmen. Parts of the vessel were raised in 2002, and the turret was found to contain the remains of two crewmen. They were laid to rest in Arlington in a 2013 ceremony. A number of her crew were Irish American (Damian Shiels) A detail of the Monitor headstone. The remains of the two men were not firmly identified, though it was posited that one was possible Galwegian Thomas Joyce (You can read Megan Smolenyak’s research on him here) (Damian Shiels). Felix Brannigan was born in Ireland in 1844. He served with the 74th New York Infantry during the American Civil War, and received the Medal of Honor for actions at Chancellorsville in 1863. The story of that action has been covered in detail on the site, and you can read about it here. Brannigan’s correspondence is among the most important surviving Irish American collections from the conflict, and is held in the Library of Congress. For a discussion of his motivations and beliefs, check out the excellent series that focused on him over at Immigrants Civil War (Damian Shiels) Thomas R. Kerr was born in Coleraine, Co. Derry in 1842. He rose to the rank of Captain in the 14th Pennsylvania Cavalry during the war, and received a Medal of Honor for his actions at Moorefield, West Virginia on 7th August 1864. His citation reads: “After being most desperately wounded, he captured the colors of the 8th Virginia Cavalry (C.S.A.).” He died in Pittsburgh in 1926 (Damian Shiels) Michael Kerwin was born in Co. Wexford in 1837. He rose to the Colonelcy of the 13th Pennsylvania Cavalry during the American Civil War. A noted Fenian, he returned to Ireland after the conflict to aid that struggle, where he was arrested. He held a number of important posts in America in the late 19th century, including that of New York Police Commissioner. You can read the detailed profile of him on the site here (Damian Shiels)