Corcoran’s Irish Legion were, along with the Irish Brigade, one of just two brigade-level formations in the Union military during the American Civil War. Formed by famed Fenian, Brigadier-General Michael Corcoran, the regiments sustained terrible casualties during the 1864 Overland Campaign. One of those units was the 164th New York, a zouave formation with companies drawn from various parts of the state, most notably Buffalo, New York City and Brooklyn. A series of fantastic images of the regiment survive, and a small number of them are the topic of this Photography Focus. One thing the images don’t capture is the colour that was an integral part of the 164th’s uniform. Their blue trousers and jackets were faced with red embroidery, which is visible in a number of the images. The wide belts that the men sported were also red. As an indicator of their ethnic origins, the tassles on their blue zouave caps were green. Attractive in camp, these soldiers were highly conspicuous on the battlefield. The high resolution TIFF files available from the Library of Congress allow us to take a closer look at some of the men who made up one of the most notable Irish regiments of the American Civil War. 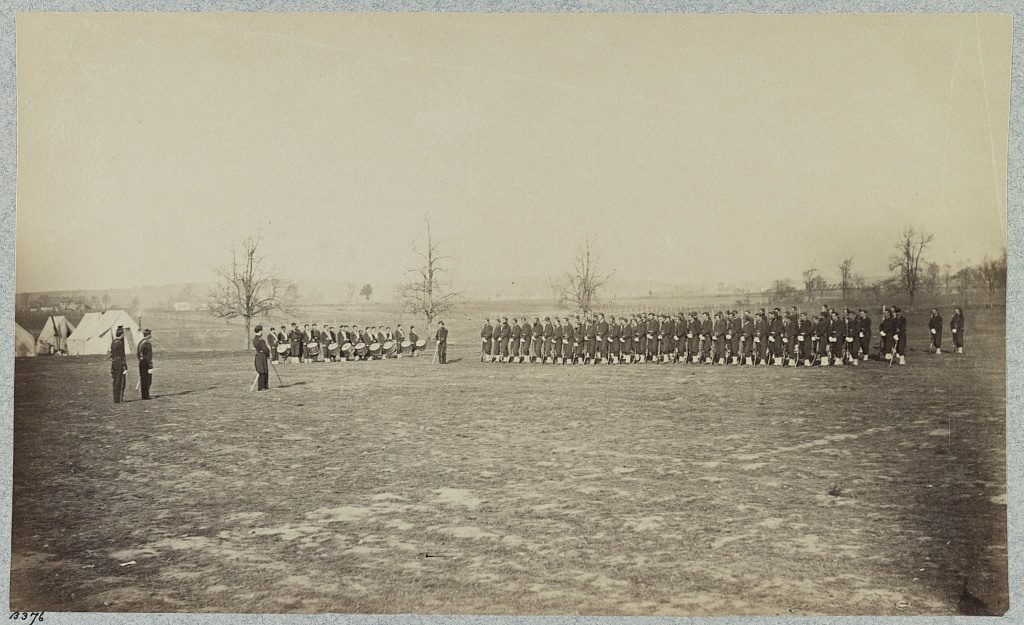 This Library of Congress image is captioned “Guard Mount, 164th New York Infantry.” It originally appeared in Volume 8 of The Photographic History of the Civil War, entitled “Guard-Mount of a Smart Regiment–The One Hundred and Sixty-Fourth New York.” It declared that the morning guard mount was “less arduous than bayonet drill…The men detailed to this duty were about nine o’clock, drilled in a few of the movements of the manual of arms, and inspected by the officer of the day, distinguished by a scarf across the shoulder. Then they were marched out to relieve the guards on duty, and their full tour of this duty was twenty-four hours.”

The first detail from this image zooms in on some of the Irishmen of the 164th, showing the varying heights of the soldiers.

A closer view. This aspect shows the personal preferences of the zouaves when it came to facial hair, with some sporting beards and moustaches, while others have opted for sideburns or are cleanshaven.

This detail has long fascinated me, because of the soldier visible on the extreme left. He appears to be African American, serving as a regular soldier. I would be very keen to hear any readers thoughts on this serviceman, and if anyone has encountered any parallels.

Beyond the officers in this detail are the drummer boys, their youth clearly apparent. At the left a fifer holds his instrument to his lips. The best modern depiction of the regiment is a fine painting of a 164th drummer executed by noted artist Don Troiani. 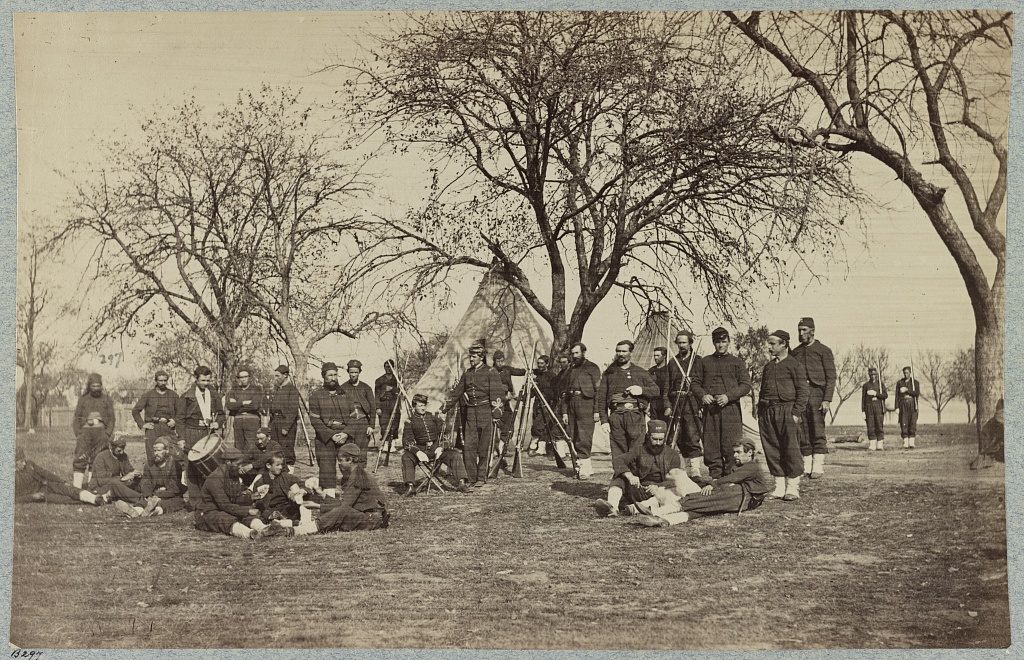 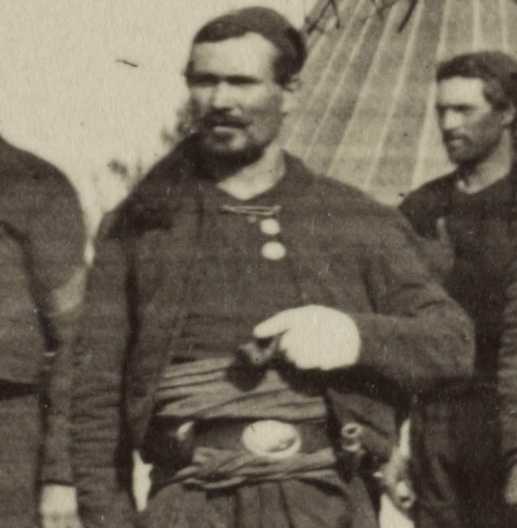 This detail zooms in to look at one of the Irishmen who is grasping his pipe in the image. The wide belt that was coloured bright red is clearly visible, adding to his swashbuckling appearance. He also appears to have a medal of some sort pinned to his chest. 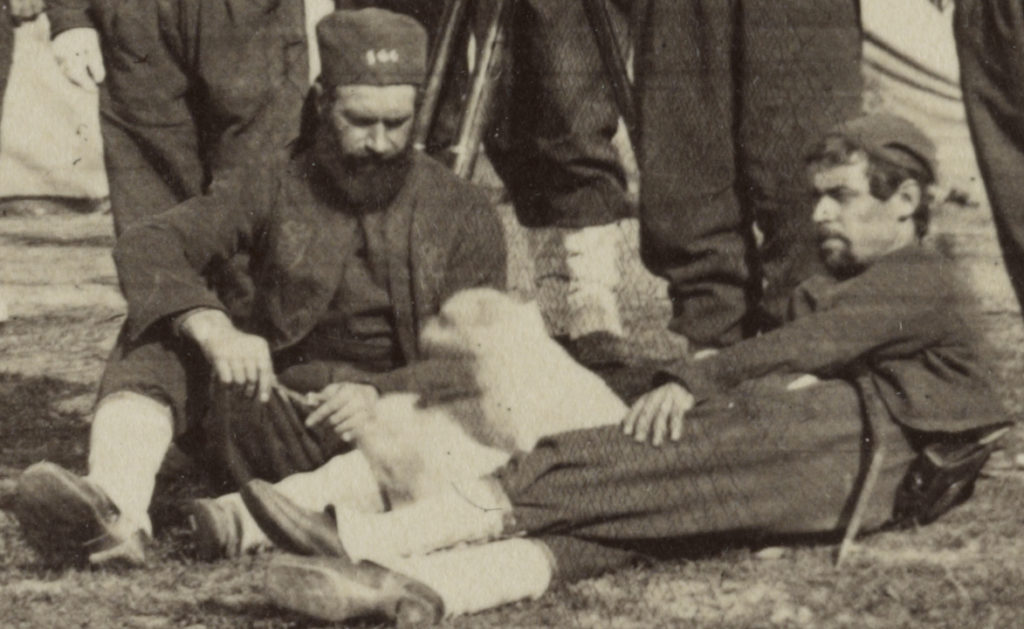 Perhaps my favourite detail from any Irish image of the American Civil War. Two zouaves, one with “164” clearly visible on his cap, sit with their two dogs, which appear to be terriers of some sort. The embroidery that added red splashes to the sleeves and front of the zouave jacket is clearly visible on the soldier at the left. 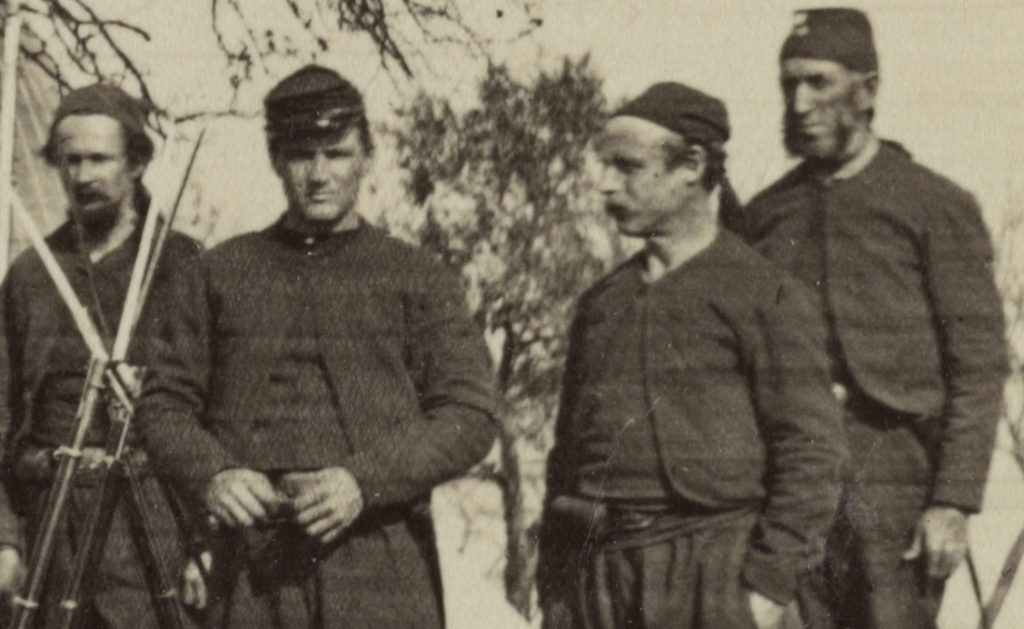 Another detail showing some of the mixed headgear among the men. The soldier on the right has a particularly “Irish” look, with pronounced sideburns. 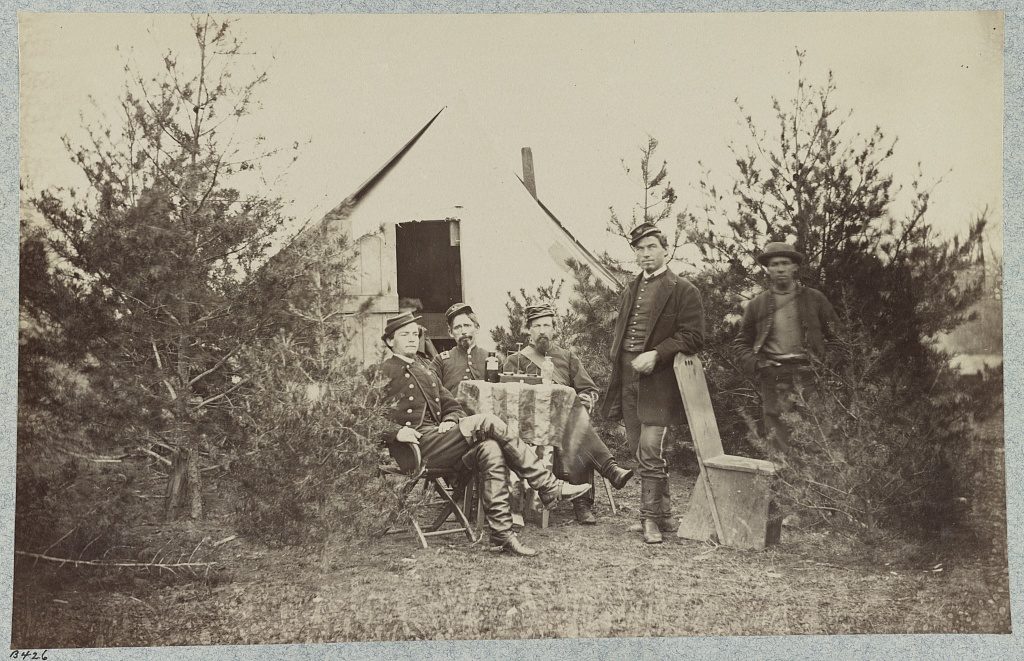 Another of the 164th series focuses on the surgeons of the 164th New York outside their quarters, sitting by a table which contains some of their materials. 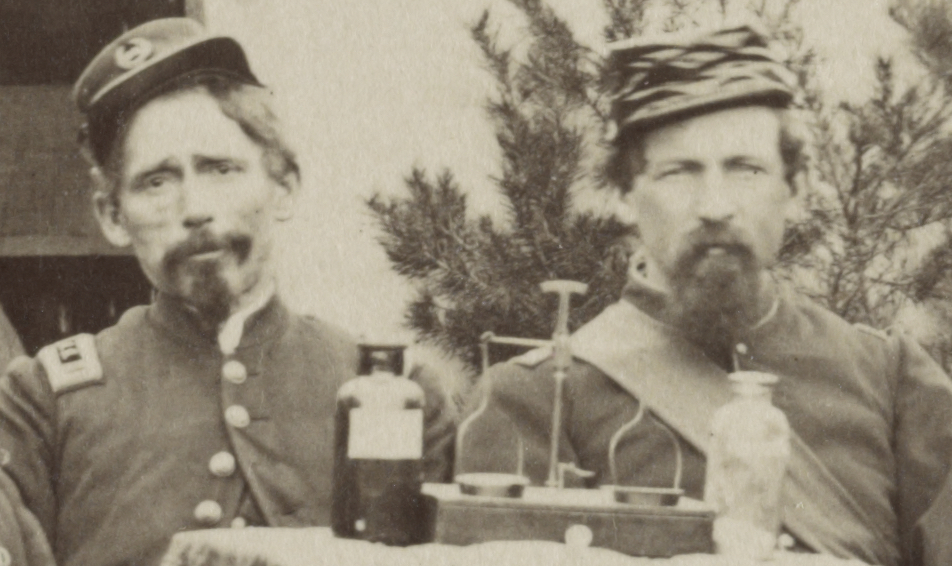 A detail of two the men  reveals not only the bottles and scales on the table, but also the fact that one of the surgeons has an expression which is all too rare in Civil War images– a smile. 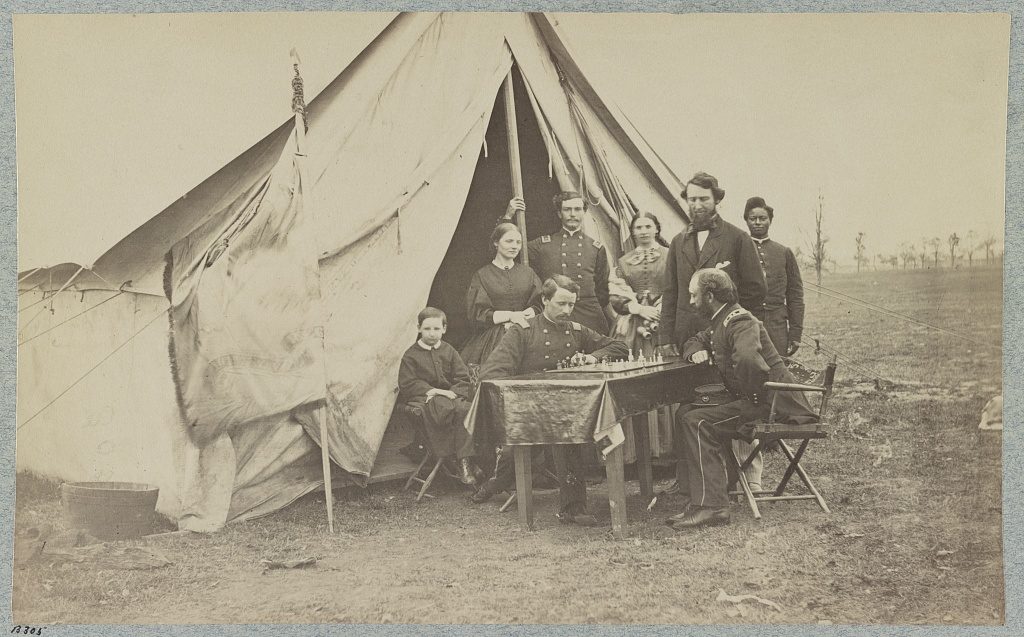 The final image we will take a closer look at in this series is captioned as “Headquarters of 164th New York Infantry” in the Library of Congress. Another that appeared in The Photographic History of the Civil War, it was there titled “A Game of Chess at Colonel McMahon’s Camp.” The description notes that “Occasionally in permanent camps, officers were able to receive visits from members of their families and friends. This photograph shows an earnest game of chess between Colonel (afterward Major-General) Martin T. McMahon, assistant adjutant-general of the Sixth Corps, Army of the Potomac, and a brother officer, in the spring of 1864 just preceding the Wilderness campaign. Colonel McMahon, who sits near the tent-pole, is evidently studying his move with care. The young officer clasping the tent-pole is one of the colonel’s military aides.” Martin McMahon was born in Canada into an Irish emigrant family (accounts vary as to whether they were from Waterford or Wexford). He was awarded the Medal of Honor for actions during the war. Both his older (Irish-born) brothers commanded the 164th New York, and both lost their lives during the conflict. John Eugene McMahon died in late 1863, while James Power McMahon was killed leading his regiment in the assault at Cold Harbor in 1864. (as friend of the site Joe Maghe points out, there is some discussion as to whether this image may actually be James Power McMahon rather than Martin).

African Americans were frequently retained as servants by Union officers, and many of them had been former slaves. It seems probable that this man acted in a personal capacity for Colonel McMahon. 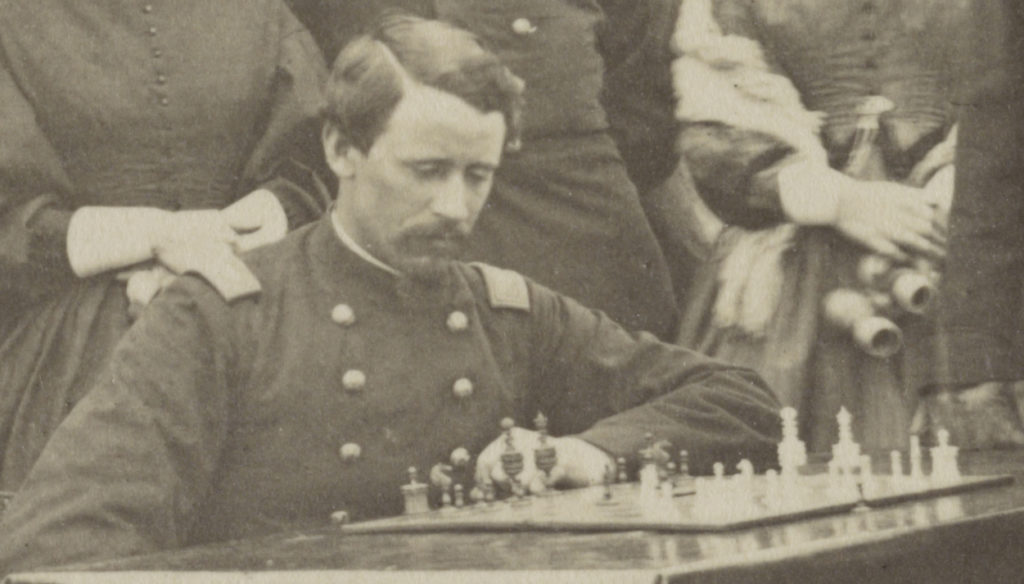 A close up of the Colonel studying the board. I don’t play chess, so if anyone who does has an idea of the progress of the game I would be keen to hear from you!

One of the ladies in the image. This detail focuses on the field-glasses she is holding, no doubt having recently used them to survey various military formations and positions.