A number of years ago, Donegal teacher Gerry Moore launched the fantastic My Adopted Soldier project. The cornerstone of his efforts saw 32 Irish school students–one from every county in Ireland–research an Irish soldier from their area who died during the First World War, tell their story, and then undertake a trip to visit the graves and memorials on the battlefields where they fell. This innovative educational project was a tremendous success, garnering praise not only within Ireland but also from bodies such as The Council of Europe. Now Gerry has turned his attention to the American Civil War, and hopes to replicate the event for the Irishmen of that conflict in 2020– asking me to come on board to assist him with it. If we succeed in making it a reality, it offers not only a major teaching opportunity, but also the prospect of raising awareness of the immense numbers of Irish emigrants who fought and died in 1860s America.

The President of Ireland, Michael D. Higgins, addressing the 32 students of the “My Adopted Soldier” Project prior to their visit to the First World War battlefields in 2015.

Following the format of the First World War My Adopted Soldier programme, students studying history in 5th Year (for American readers, the equivalent of Junior Year in High School) will be invited to submit a short proposal outlining why he/she wishes to be chosen to represent their county. The applications will be assessed, and the 32 students chosen will then be provided with the names of three soldiers from their county who died in the Civil War. They will research their stories, and then select one of the individuals to “adopt.” I will assist each of the students during the research process. That research will be uploaded to the www.myadoptedsoldier.com website, and subsequently the trip will take place. Provisionally we are intending to feature the battlefields of Fredericksburg, Antietam and Gettysburg. The primary aims for the project are set out below. 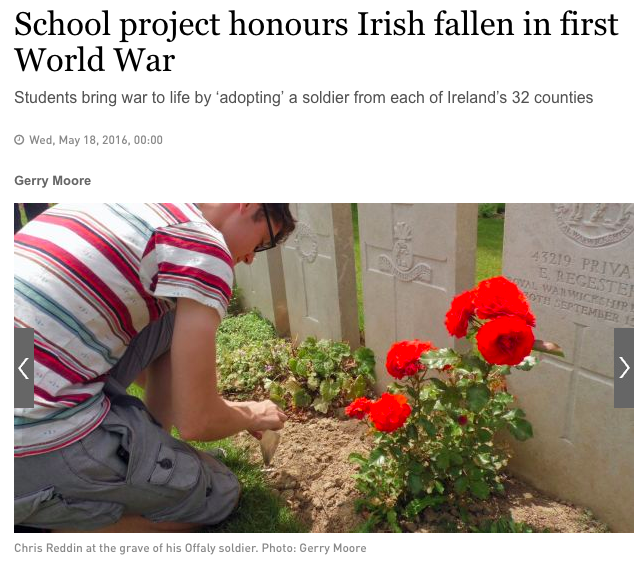 The Irish Times coverage of the My Adopted Soldier Project (Click image to read article).

The project is just commencing and is currently in the fund-raising stage, with a number of approaches being made to prospective supporters. I would be very eager to hear from readers–particularly those in the United States–of any potential funding streams that they may feel may be worth pursuing, or indeed any Irish American organisations or links that we should consider contacting with respect to it. If you have any thoughts in this direction you can email me the details at irishamericancivilwar@gmail.com and I will pass them on to My Adopted Soldier. Also, please feel free to share this with anyone you think may be interested!