Photography Focus: An Irish Brigade Husband & Wife– Can You Help Identify Them?

Photography Focus: An Irish Brigade Husband & Wife– Can You Help Identify Them?

The Irish in the American Civil War website has benefited greatly over the years from the expertise, generosity and friendship of Joe Maghe. Joe is one of the foremost collectors of Irish-associated material from the American Civil War, and dedicates a great amount of his time both to telling the story of the Irish experience and seeking to reform dispersed collections associated with Irish servicemen and their families. Joe kindly granted permission for the use of some of his images in my first book, and parts of his collection have also featured on the website in the Witnesses to History series (e.g. see here). Quite a while back, Joe alerted me to the existence of an image that instantly captivated me. Given that I spend most of my time working on the impact of the conflict on Irish families, I have always had an affection for images that show servicemen with their wives and/or children. Among them, this one immediately became my favourite. Depicting a soldier and his wife, it draws the viewer in like few depictions of Irish American couples from the war I have seen. There is so much to see in the image. The soldier is immaculately groomed and turned out, while his wife has dressed in what was undoubtedly her “sunday best”, replete with fine bonnet.

The creation, exchange and possession of “likenesses” was an extremely important aspect of how loved ones maintained connections with each other during the war. They were constantly referenced by Irish Americans in contemporary correspondence. Individuals did their best to look good in them, exchanged them as often as they could, and always kept them close at hand– both at the front and at home. This image exudes the importance the photograph held for both the man and woman featured in it, and they evidently went to some effort to have it created. I am delighted that Joe has now acquired it as part of his collection. One of the most exciting aspects of it is that we can have some confidence the couple are Irish American. The soldier’s hat betrays the fact that he is a member of Company H of the 63rd New York Infantry, Irish Brigade. Unfortunately, we know no more than that, so cannot at present hope to uncover more of their story. Although a long-shot, we would love to hear if anyone has any thoughts as to the identify of this man and woman. It would be fantastic to put a name to them, particularly as I personally believe it is one of the most powerful Irish American images from the American Civil War. Many thanks to Joe for allowing me to share this very special image, and if you have any thoughts, please drop me a line! 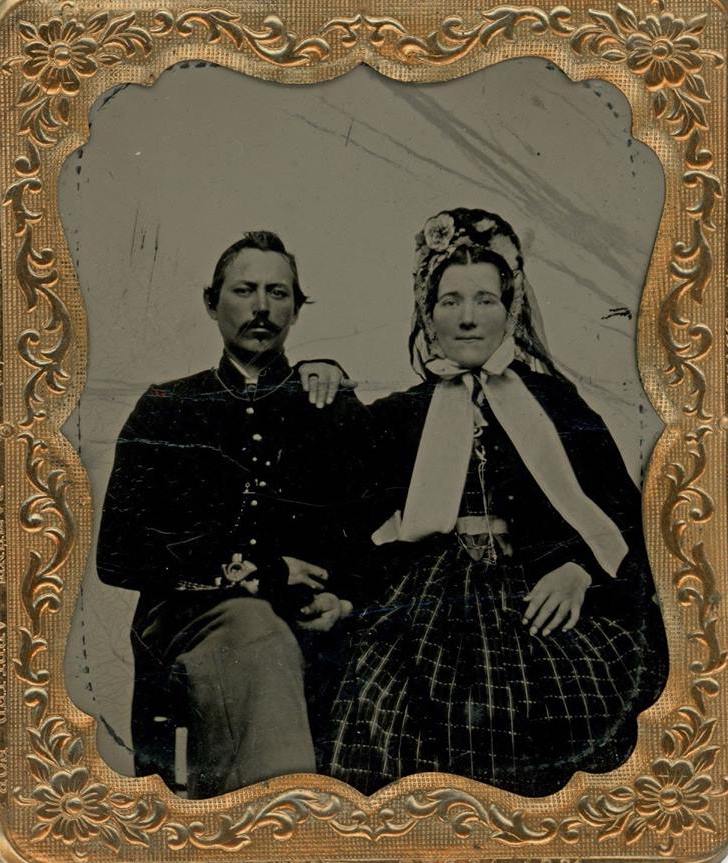