The Kiely Family Story: From New York to Kilmacthomas Workhouse, and Back Again

The Kiely Family Story: From New York to Kilmacthomas Workhouse, and Back Again

When the American Civil War broke out in April 1861, Ireland’s Nation newspaper predicted that the lives of Irish emigrants would be “offered in thousands. Many a mother’s heart in Ireland, long cheered by the affectionate and dutiful letter and the generous offerings of filial love, will be left lone and widowed by the red bolts of war. Many a fireside from Dunluce to Castlehaven will be filled with mourning as each American mail arrives.” Their predictions proved prescient. As the war dragged on over the next four years, American Consuls in Ireland struggled to assist often destitute mothers and widows whose loved ones had perished across the Atlantic (for an example of such an incident see here). The financial hardships that they experienced were often very real– as demonstrated by the case of Mary Kiely in Co. Waterford. (1) 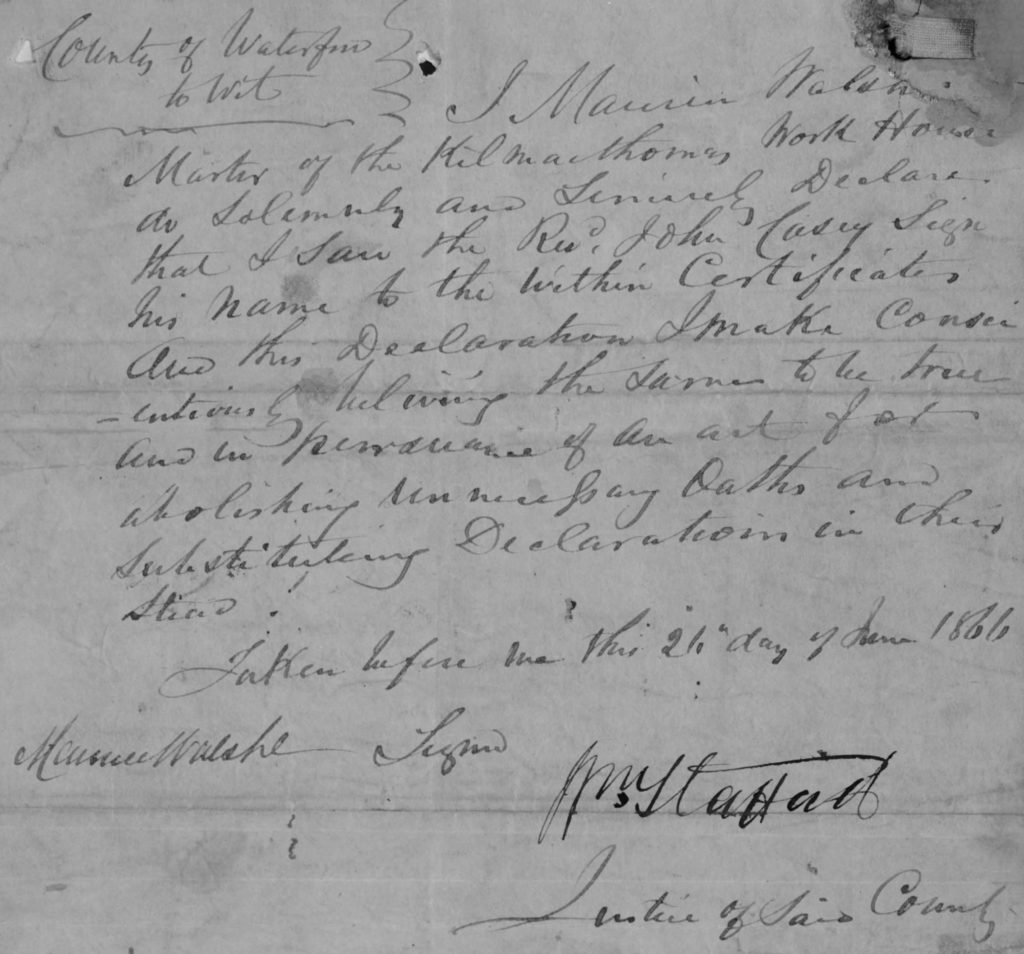 Mary Whelan and John Kiely had been married in Killrossanty, Co. Waterford by the Parish Priest Father John Casey on 2nd November 1846. John, who had been born in Stradbally (or possibly the townland of Shanbally), was around 20-years-old at the time, while Mary was slightly older at 24. The couple made their home in the parish of Killrossanty at the eastern base of the Comeragh Mountains in the years that followed. John may be one of the two John Kiely’s recorded there in the Griffith’s Valuation– one living in Garranmillion Lower, the other in Lemybrien. The couple had three children who would survive to adulthood, and all were baptised in Killrossanty- Bridget (b.1848), Patrick (b.1850) and Ellen (b.1852). At some point in the next decade, John left his family behind and travelled to the United States. Though he may have abandoned them, it is more likely that he was leading the way to America, intending to gather money so as to send for the rest of his family. Whatever the reality of his motivation, circumstances intervened. (2)

John was working in New York when the American Civil War broke out. Like most Irish emigrants, he had probably made his initial home among those who were from the same place in Ireland. Indications are that for John this was in New York’s Seneca County (he may be the man recorded in 1860 as a day laborer in Tyre, Seneca County, with a misspelled surname). It was in Seneca County– to be precise in the town of Seneca Falls– that he took the decision to volunteer on 1st May 1861. When he did so he was described as 5 feet 6 inches in height, with a light complexion, blue eyes and light hair. Later that month John was officially mustered in as a private in Company K of the 33rd New York Infantry–the Ontario Regiment–at Elmira. (3) 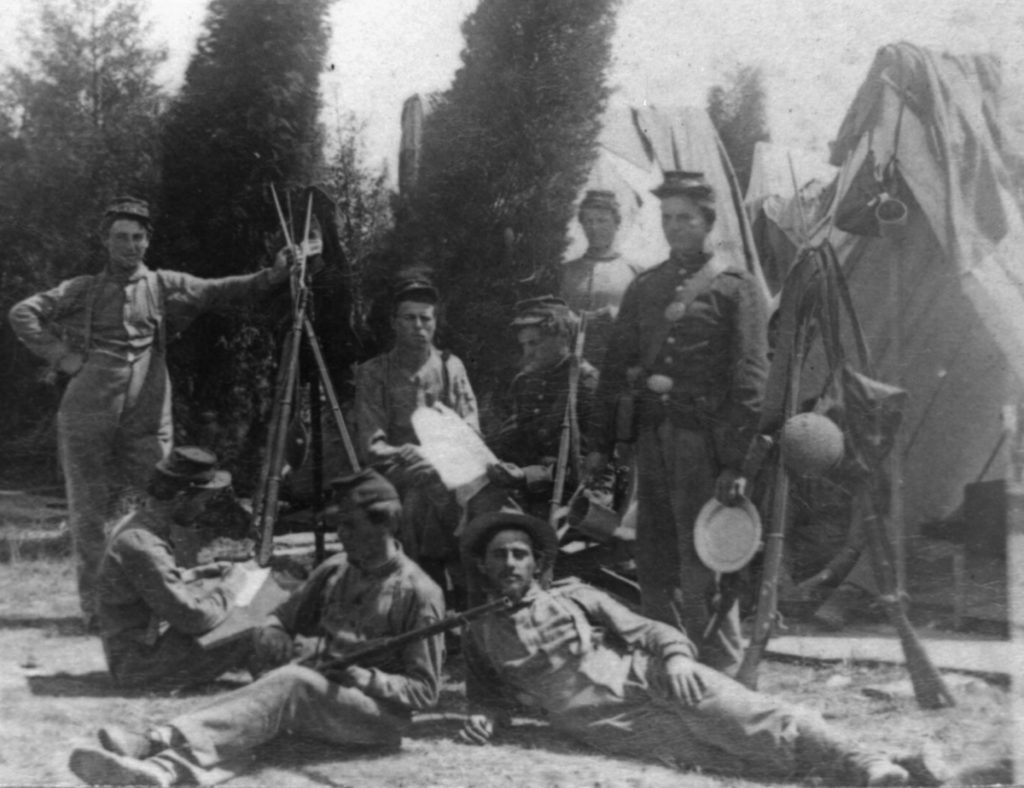 Soldiers of John’s regiment, the 33rd New York Infantry, during the Civil War (Library of Congress)

The 33rd New York was not an Irish regiment, but Company K had a particularly strong Irish component. A non-Irish veteran of the regiment recalled how the early war rush to arms was:

…true to a remarkable degree of the Irish population of Seneca Falls. The call of the President for troops led to the immediate formation of an Irish Company. Patrick McGraw, who had served in Her Majesty’s service for upwards of fifteen years, superintended its organization, and was afterwards chosen Captain [McGraw was from Co. Down and had reportedly served in Canada and Britain with the 89th Regiment of Foot]…On Sunday afternoon, April 11th, the Sabbath quietude of the village was disturbed by the music of bands and tramp of citizens. Every one was on the alert, and every eye turned towards one point, the Catholic Church, for there the organization of the Company was to receive, after Vespers, the sanction and benediction of the Catholic Pastor…Vespers ended, an address was delivered by the Pastor, who urged loyalty to the Union, the defence of a common country, and the perpetuation of the traditional bravery of the Irish race. (4) 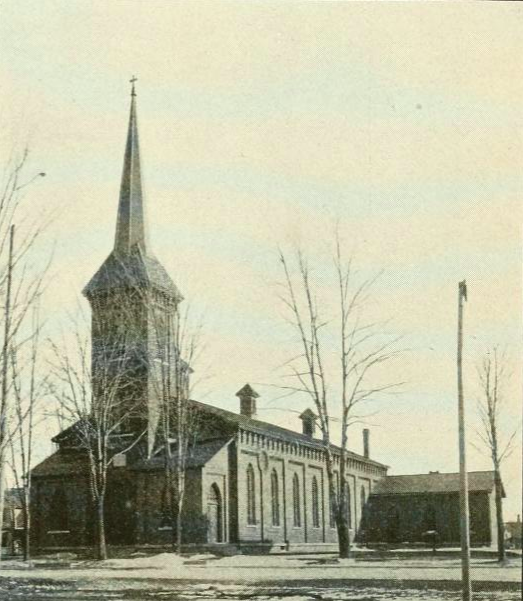 When John Kiely and his comrades in the “Irish Volunteers” of Company K set off for Elmira at the end of May, the factories and shops in Seneca Falls closed, and the men were escorted out of the town accompanied by the local militia company (the Jackson Guards), the fire companies, and throngs of locals. In the months that followed John experienced the hardships of battles on the Virginia Peninsula and Antietam. While the regiment was heavily engaged at the latter battle, one of John’s fellow Seneca Falls Irishmen–Surgeon Richard Curran from Ennis, Co. Clare, who had initially enlisted as a private in Company K– performed life saving actions that would see him awarded the Medal of Honor (you can read Richard’s story here).

Having survived these horrors, it was John’s fate to fall gravely ill. He became so sick that on 19th November 1862 he was officially discharged from the army for disability at Fort McHenry, Maryland (where the famous “Star-Spangled Banner” had flown in 1814). It proved too late. On 29th November John died in hospital in Frederick, Maryland. If the family’s strategy had been for them to join him once he had raised enough funds, that plan died with the unfortunate Waterford native. The repercussions of his loss for those back in Ireland was not long in coming. (5) 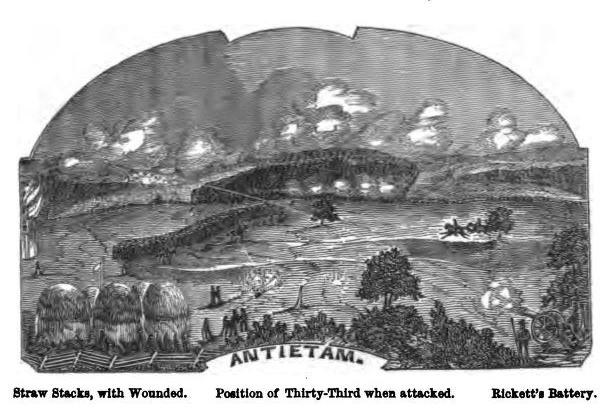 Far from starting a new life in America as she may have hoped, by 1866 Mary Kiely was instead reliant on local charity in Waterford. Though it is not clear if her children were with her, she at least had become an inmate of Kilmacthomas Workhouse. The institution was given as her address when the then 44-year-old applied for a U.S. pension based on her husband’s service. Given the information she had to gather, and the time it took to communicate back and forth with the Bureau of Pensions in Washington D.C., it is unsurprising that the process was a long one. She was still resident in the Workhouse more than a year later, and still seeking a resolution to her claim. Both the Guardians of the Workhouse and members of the local community gave evidence in her support. In June 1866, Father Casey, the man who had married Mary in 1846 and baptised all her children, travelled to the Workhouse to give a statement to that effect, in an affidavit that was witnessed by Maurice Walshe, then Master of Kilmacthomas Workhouse (see image above). Aside from wanting to see the widow’s circumstances improve, the Guardians also had another motivation in helping her, as explained by the U.S. Consul in a communication to the Pension Bureau in 1867:

This claimant is an inmate in an Irish Workhouse the Guardians are of course interested in the success of the claim, which will relieve the Parish of her support.

Among other locals who helped to confirm the facts of Mary’s life were Maurice Nugent of Kilmacthomas, Richard Butler of Currabaha and John Hurley of Georgestown. (6) 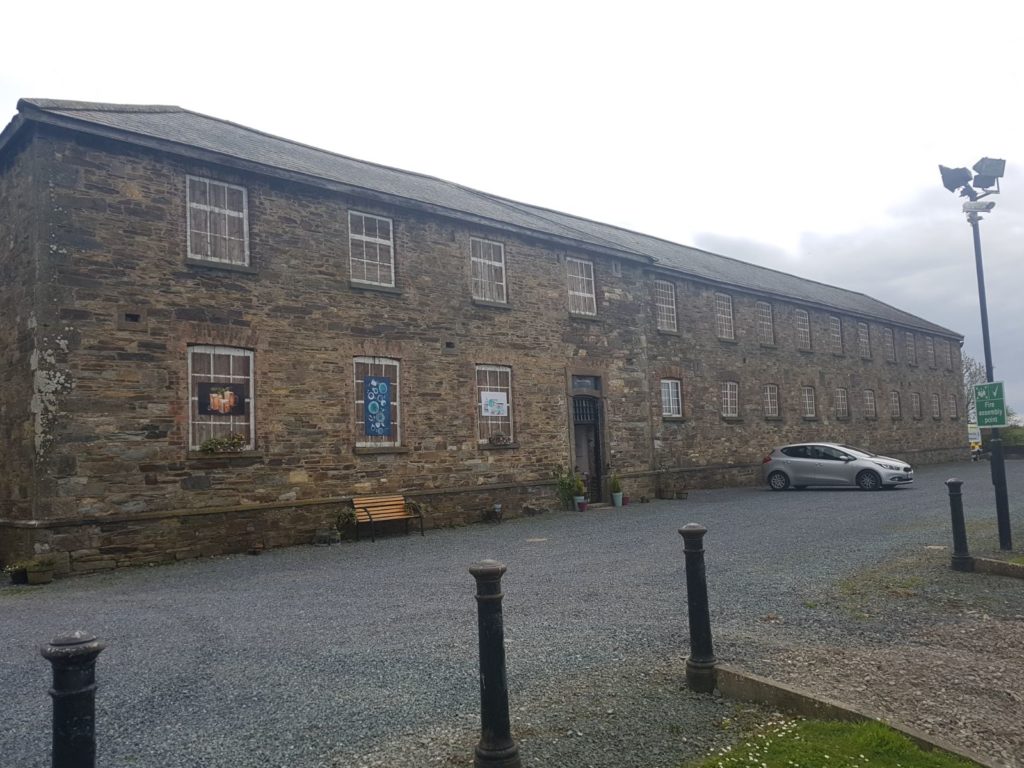 Eventually Mary’s pension was approved, and it surely played an important role in her eventually exiting the Workhouse. Ultimately, she too would end up in America, though perhaps many years later than she had initially anticipated. By the late 1870s she was living with her eldest child Bridget, who was now married and living in Rondout, Ulster County, New York. Like her husband, she had eventually made it across the Atlantic. She passed away there in 1878– the last we hear of her is in a letter to the Bureau from her daughter, seeking arrears of her pension.

My Mother Mary Kiely died August 15/78 at Rondout, Ulster Co., N.Y. Received a Pension by Certificate No. 98395 as widow of John Kiely Prvt, Co. “K”, 33d Regt N.Y. Vols to commence August 24th 1866. John Kiely died November 28 or 29, 1862. Under Act Jany 25, 79, if she was living she would be entitled to the arrears viz; the pension for death of her husband, to time her pension commenced, about 4 years. She left 3 children all minors at our fathers death but all of age now are they entitled to the arrears if not can [section missing] we draw the same and if so how.

Mary Kiely’s story, though fragmentary, is a good example of how the American Civil War could impact families still in Ireland. It also attests to the links maintained between specific locales in Ireland and Irish communities in the United States. Ultimately, the money provided by the American Government was likely vital in allowing Mary to escape her fate, and finally make her way–along with at least some of her children– to a new life across the Atlantic. Unfortunately, she was far from the only woman who found herself in an Irish Workhouse as a result of a Civil War death (if you are interested, you can find the story of another in my book, The Forgotten Irish).

If you would like to read another story connecting American military service with a Waterford Workhouse– in this case Dungarvan Workhouse and the Second Samoan Civil War, you can do so by clicking here. 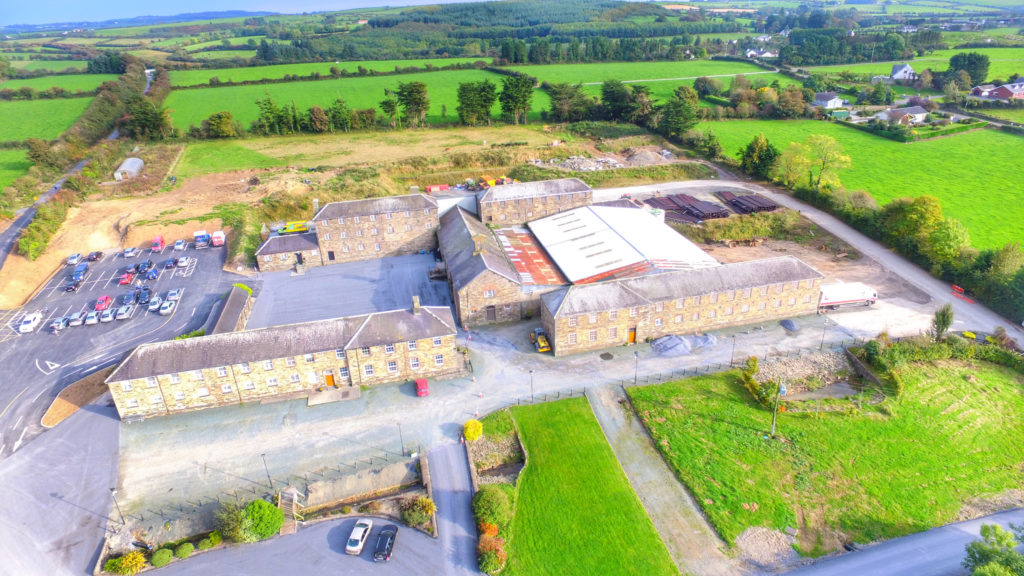 The Kilmacthomas Workhouse complex from the air (Image: Pat Kenealy)

** None of my work on pensions would be possible without the exceptional effort in the National Archives to digitize this material and make it available online. A team of archivists from NARA supported by volunteers have enabled access to this treasure trove of historical information. To learn more about their work you can watch a video by clicking here.

Judd, David W. 1864. The Story of the Thirty-Third N.Y.S. Volunteers or Two Years Campaigning in Virginia and Maryland.