More Irish than the Irish: The Forgotten Irishmen of Gettysburg’s Wheatfield

More Irish than the Irish: The Forgotten Irishmen of Gettysburg’s Wheatfield

Discussion of the Irish at Gettysburg is dominated by the Irish Brigade. Their contemporary and post-war fame– together with their striking battlefield monuments– have contributed to this continuing focus. As the most famed ethnic Irish formation of the conflict, their actions at Gettysburg have arguably even eclipsed those of the 69th Pennsylvania Infantry, the green flag unit which as a single regiment sustained substantially more mortal casualties than the entire Irish Brigade during the fighting. It may surprise some readers to learn that even within Gettysburg’s Wheatfield sector, where the Irish Brigade fought, they were not the formation to suffer the most Irish-born fatalities. Indeed, it is possible that they may actually be placed third when it comes to that dubious distinction.

I have discussed in many posts how a continuing focus on ethnic Irish units, particularly the Irish Brigade, has served to narrow both popular and historical discussion of the Irish during the American Civil War. Though storied formations like the Irish Brigade deserve attention, it is important to remember that the vast majority of the Irish in uniform served in non-ethnic formations; if we wish to fully examine topics surrounding the Irish experience, it is to these men and their families that we have to turn. In order to explore the degree to which these ethnic regiments and brigades have the capacity to dominate memory, I decided to look specifically at the Wheatfield sector on Gettysburg’s Second Day, and two other brigades that contained large numbers of Irish. The results of that analysis reveal that if we want to properly discuss the Irish experience in and around the Wheatfield– particularly in terms of losses– we have to look beyond the Irish Brigade. Our gaze must also fall upon the men of the 2nd Brigade, 2nd Division of the Union Fifth Corps: the United States Regulars who entered the fight under the command of Colonel Sidney Burbank. 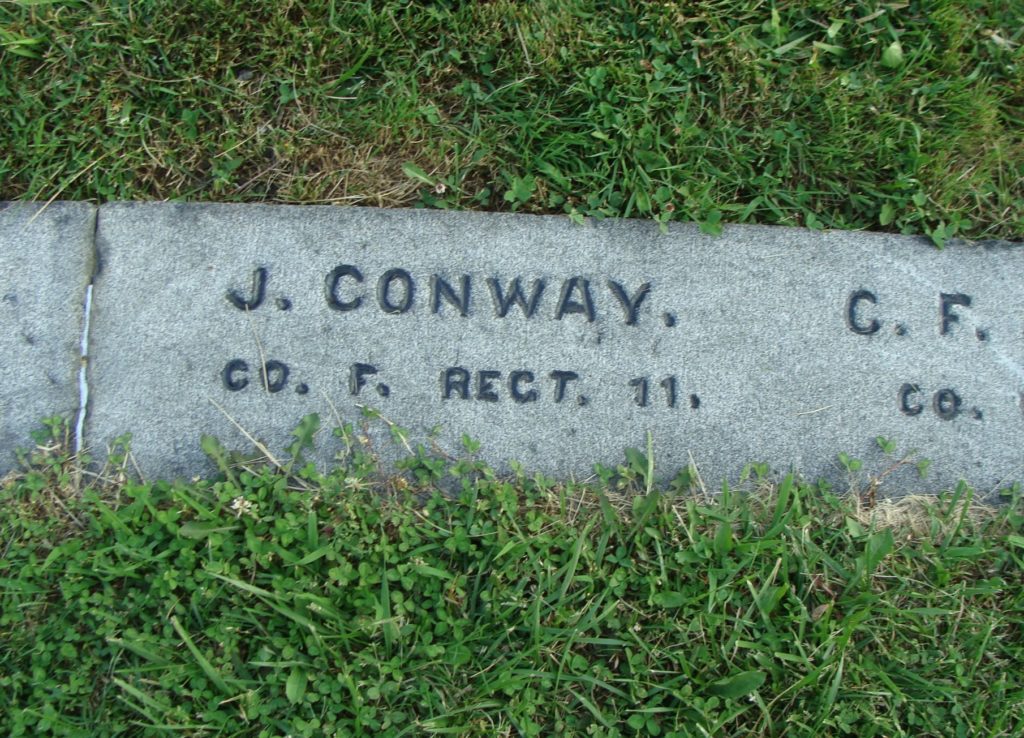 The grave of Private John Conway at Gettysburg National Cemetery. A native of Doon, Co. Limerick, he was mortally wounded on 2nd July 1863 while serving with the 11th United States Infantry, 2nd Brigade, 2nd Division, 5th Corps (Find A Grave:OPPSheryl)

The Irish Brigade that advanced into the Wheatfield in the late afternoon of the 2nd July 1863 was by that point in the war a much reduced force of just over 530 men. By the time their fight at Stony Hill and eventual retreat from the Wheatfield was over, some 32 of them had been killed or mortally wounded– the Brigade suffered c. 37% casualties. As the Irishmen and their division were forced back by the Confederates, it was the United States Regulars who were called upon in an effort to stem the Rebel tide. Specifically, the two brigades of Regulars that formed part of the Fifth Corps’ Second Division (a division which also included Paddy O’Rorke’s 140th New York Infantry). The First Brigade under Colonel Hannibal Day consisted of the 3rd, 4th, 6th, 12th and 14th United States Infantry, amounting to more than 1500 men in total. Their companion brigade– which would lead the way at Gettysburg– was much smaller. Colonel Sidney Burbank’s Second Brigade was made up of the 2nd, 7th, 10th, 11th and 17th United States Infantry, and counted a little over 900 men in the ranks. Between them, Day and Burbank had hundreds of Irishmen under their command. (1)

Like the Union Navy (which was 20% Irish-born), the United States Regular service had long been a traditional source of employment for Irish emigrants. Immediately prior to the war it was dominated by Irishmen, and during the conflict 20% of all Regular enlistments were Irish. By the time these soldiers were thrown into the fight late on Gettysburg’s Second Day, there was little they could do to stem the Rebel push. From their position near Little Round Top, Burbank’s men, supported by Day’s, were directed into the Plum Run Valley and towards the Wheatfield. By the time they crossed Plum Run they began to take flanking fire from Confederates in Devil’s Den, but continued on towards their objective. Both brigades made it to a stone wall to the east of the Wheatfield, where they witnessed elements of Caldwell’s division (which included the Irish Brigade) being forced back by the attacking Rebels. Burbank’s men went in, with the left of their line moving through a stretch of Rose’s Woods, the right wheeling into the Wheatfield itself. Within minutes there were Confederates on their flank and threatening their rear; after a brisk firefight they had little option but to retrace their steps back to the stone wall. Still the enemy came on. With Southerners moving further to the right the Regulars risked being cut off, and both brigades now had to continue their retreat back from whence they had come. Recrossing Plum Run as Confederate bullets plunged into them from three sides, the orderly fashion in which they conducted their retreat was long remembered by those who witnessed it. Eventually they reached the cover of their own artillery, who commenced firing over their comrades’ heads to stem the ardour of the pursuing enemy. All told, the two Regular brigades had spent less than an hour in the Wheatfield sector. Day’s men had not even had an opportunity to directly confront the enemy, spending their time in reserve and retreat. Despite this, their losses were severe. Day’s Brigade suffered over 25% casualties, Burbank’s smaller formation a crushing 47%. Of these men, how many were Irish? (2) 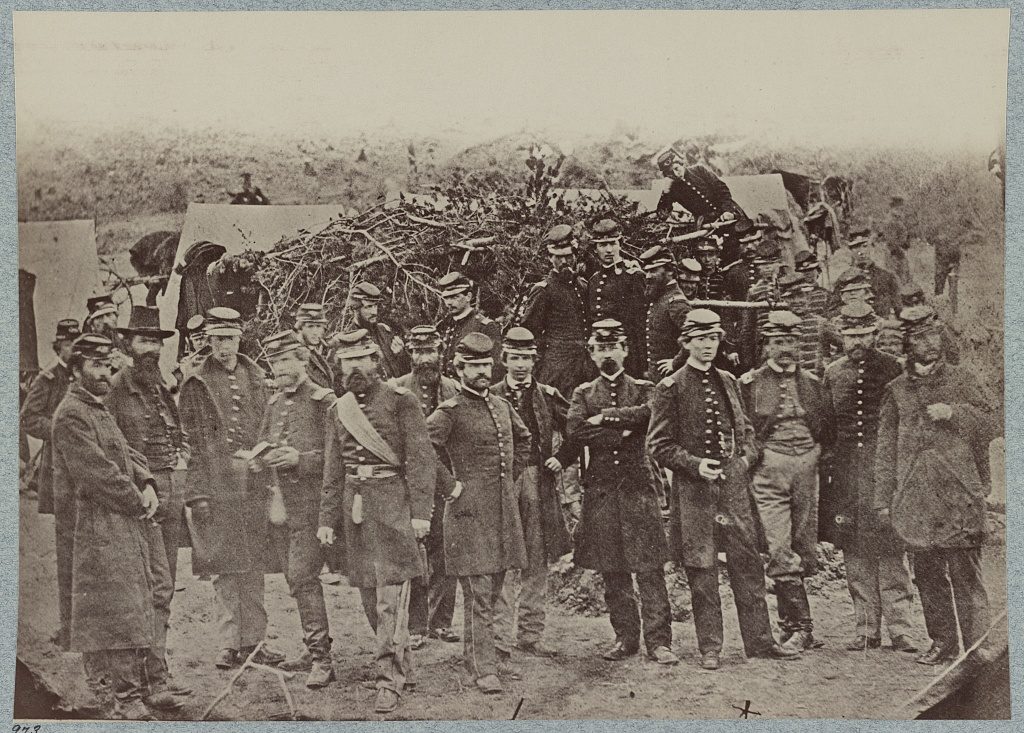 Using John W. Busey’s work on the Union dead of Gettysburg as a baseline, I sought to uncover how many of the Regulars who were killed or mortally wounded at Gettysburg were Irish-born. Bear in mind that this is not a measure of how many of the Regulars regarded themselves as ethnically Irish-American, so is naturally an underestimate of that figure. It is immediately evident from looking at those who died that a number of the American, English and Canadian-born dead of Burbank’s and Day’s brigades were from Irish communities. Busey identified the birthplaces of a large number of the Regular dead, analysis which I have supplemented with additional research into the U.S. Army Register of Enlistments and Pension Files (Tables 1 & 2 below). This demonstrates that at a minimum 57 Irish-born men were killed or mortally wounded with the Regulars on Gettysburg’s Second Day. This figure may be as high as 63 (when those with Irish surnames but with no known nativity information are included). (3)

Of the total, 25 of the Irish-born fell in Day’s First Brigade. Busey identifies 97 total fatalities associated with the Brigade, making the Irish-born percentage almost 26%, or just over one in four. To reiterate, this is an underestimate of ethnic Irish/Irish-American losses, as it does not include those of unidentified nativity and those from Irish families born outside Ireland. The total ethnic Irish figure may well exceed the fatalities in the Irish Brigade (32), and are certainly comparable to them. More detailed analysis of the First Brigade’s slightly more than 1500 men is required to determine how many were Irish American, but again, it may well be comparable to the full size of the Irish Brigade, perhaps slightly fewer. The details of these Irish-born are included in Table 1 below. (4)

The same analytical technique was used to assess the losses in the Second Brigade. Of the slightly more than 900 men of Burbank’s Brigade, Busey identifies 134 who lost their lives. My work has confirmed a minimum of 32 of these men as Irish-born (again, not ethnically Irish/Irish American). This is just under 24% of the total, again some one in four. This figure matches the fatalities experienced by the Irish Brigade, but it should be noted that the Irish Brigade figure is a global one, not all of them were necessarily Irish-born. When one considers that it is improbable that more than 50% of Burbank’s men were Irish American (indeed likely somewhat fewer), it is clear that the Irish Regulars of the Second Brigade suffered a significantly higher real and proportional loss in the Wheatfield sector than did the Irish Volunteers of the Irish Brigade. The details of the Second Brigade Irish-born are included in Table 2 below.

The purpose of this analysis has not been in any way to diminish either the history, service or actions of the Irish Brigade, who rightly remain a major focal point for those interested in the Irish experience of the American Civil War. But at least 180,000 Irish-born served under Union arms; when those of non-Irish birth who considered themselves part of Irish American communities are included, the ethnic Irish contingent in the Federal military must have substantially exceeded 200,000 men. We cannot hope to understand the experience of these individuals, their families and their communities until we explore in detail the majority who did not serve in ethnic formations. The trials of the Irish U.S. Regulars in the Wheatfield sector serve as a case in point– theirs is demonstrably a story that should form an integral part of our discussion, analysis and memory of Irish involvement on this portion of the Gettysburg battlefield. 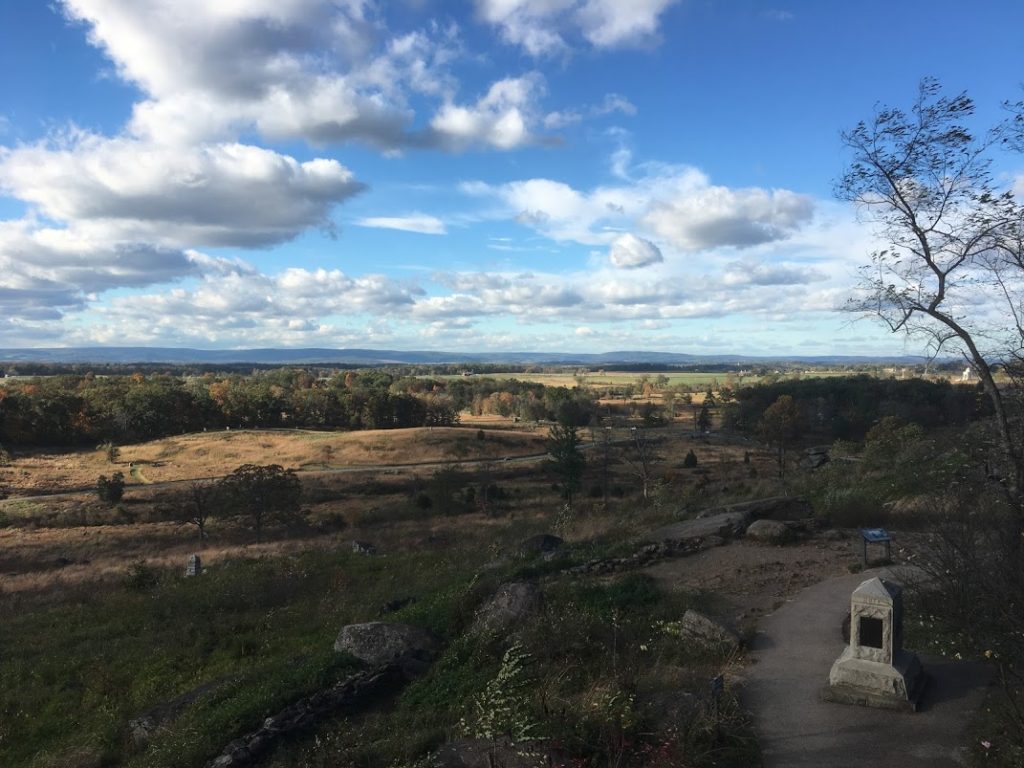 The view across Plum Run towards the Wheatfield from Little Round Top. This was the ground traversed by the U.S. Regulars on 2nd July 1863 (Damian Shiels)

Johnson, Mark W. 2012. “Where are the Regulars?” An Analysis of Regular Army Recruiting and Enlistees, 1851-1865. Unpublished PhD Thesis, University at Albany, State University of New York.