The 11th October 1862 was an auspicious day for those associated with the 69th New York State Militia. It was a little less than 15 months since they had returned– to great fanfare– from the Bull Run battlefield. Though the carnage since had dwarfed it in scale, the symbolism of that “first battle” remained powerful, and to none more so than those associated with the 69th. Now, many of the officers who had fought that day were gathered once more, this time for a more joyous occasion. That Saturday evening they joined other New York luminaries for the first viewing of a new painting that commemorated their homecoming. Congregating at the premises on 773 Broadway, the home to Goupil’s art dealership (often referred to as Knoedler’s, for it’s proprietor, German-born Michel Knoedler) they marvelled at the creation, some twelve feet in width, which portrayed the event. Appropriately, this image of immigrants was also executed by a foreign-born American– Louis Lang. (1) 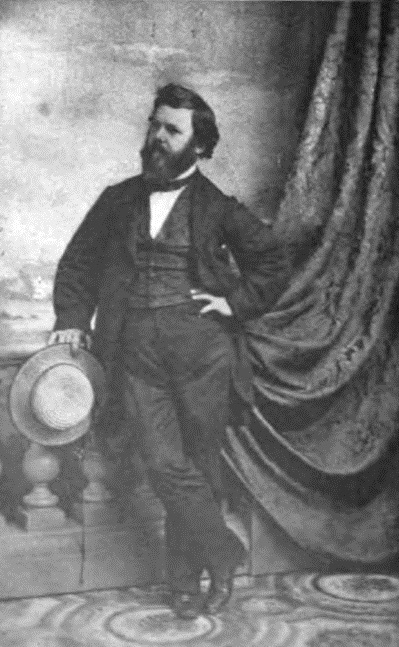 Louis Lang had been born in Bad Waldsee, Württemberg around 1812. He had studied art in Stuttgart and Paris before making the move to Philadelphia, and after a brief period in Italy returned to live in New York in the late 1830s. Elected to the National Academy in 1852, his style was described as “characterized by brilliant but well-balanced coloring; his choices of subjects is sentimental and popular.” The painting he had produced for this occasion was a marvellous sight. It depicted the march of the 69th New York State Militia up Broadway on 27th July 1861, after they had disembarked at Pier No. 1 on their return from the front. The New York Daily Herald described it to their readers:

…the spectator is supposed to be at the head of Battery place looking towards Pier No. 1, the old Washington House being on the right, Castle Garden on the left, and our noble bay in the centre distance, alive with shipping of all kinds, amongst which are several vessels-of-war firing salutes and manning their yards. The painting contains over one hundred figures-many of them portraits- all composed and arranged in a most artistic manner. The sense of light and motion is very successfully conveyed, the color is effective and harmonious, and the eye wanders from one incident to another without the confusion usually attending crowded compositions. (2) 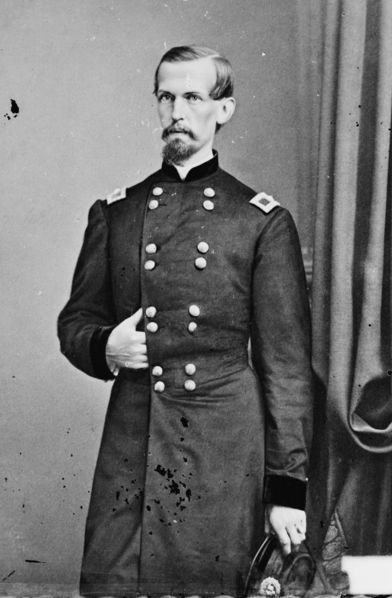 The launch of the painting at Goupil’s was a major event, with luminaries from both New York society and the city’s Irish community. There was no doubt about the star guest, none other than Michael Corcoran himself, former Colonel of the 69th who had recently been exchanged after his capture at Bull Run. Back in the city where he enjoyed celebrity status, he was now a Brigadier-General in the midst of forming the brigade that became known as Corcoran’s Irish Legion. Among the many others on the invite list were noted Irish American Judge Charles P. Daly, famed historian George Bancroft and former Young Irelander and Fenian John Savage. Also present were military such as 69th veterans and Corcoran’s staff, a host of newspapermen and art critics, including representatives of the Albion, Home Journal, Leader, Vanity Fair and the Commercial Advertiser, and artists such as Irishman William John Hennessy. (3)

For the occasion of the unveiling Goupil’s had been fitted out at Lang’s direction. Items associated with the 69th New York State Militia were placed around the gallery, including muskets, flags, drums and equipment that they had taken to Bull Run. Among the colors hanging in the room was the famous “Prince of Wales” flag of the 69th. The evening began with the assembled guests spending a couple of hours examining the details of the painting, before the event moved to an adjacent room where light refreshments such as pickled tongue, salads and “Century Punch” had been prepared. At around 9.30pm Louis Lang called everyone to order, and proceeded to give an account of the origins of the painting and his reasons for undertaking it. He dwelt on the sadness he felt that Michael Corcoran was not among the figures he could include (due to his capture in the battle). He also revealed Judge Daly as the individual who suggested the introduction of a boy selling an image of Corcoran into the composition in order to represent the regiment’s leader. Lang concluded by telling those assembled that the absence of Corcoran from the painting was more than made up for by his physical presence at the unveiling, and he called on everyone to join him in raising a glass to the “health, prosperity and glory” of the General. Corcoran himself was next to speak, thanking Lang for his words. He commended the “able, conscientious and patriotic manner” in which Lang had depicted his men, and admitted that viewing the picture “called up many sad memories” as it caused him to think of those who had left but had not come back, dying on the battlefield while “lamenting that they had only one life to give to their adopted country.” His thoughts also turned to those who had returned to be depicted in the painting, only to have since fallen on other battlefields. Reflecting on his time in captivity, he recalled the letter he had received from his friend Captain Kirker (also present) telling him of the reception the regiment had received on it’s return to New York. He concluded by offering a toast to the health of the artist, stating that he would soon depart to the field once more with his old regiment, and promising that they would deport themselves in a way that would see those who came home worthy of a similar welcome to that of 1861. (4) 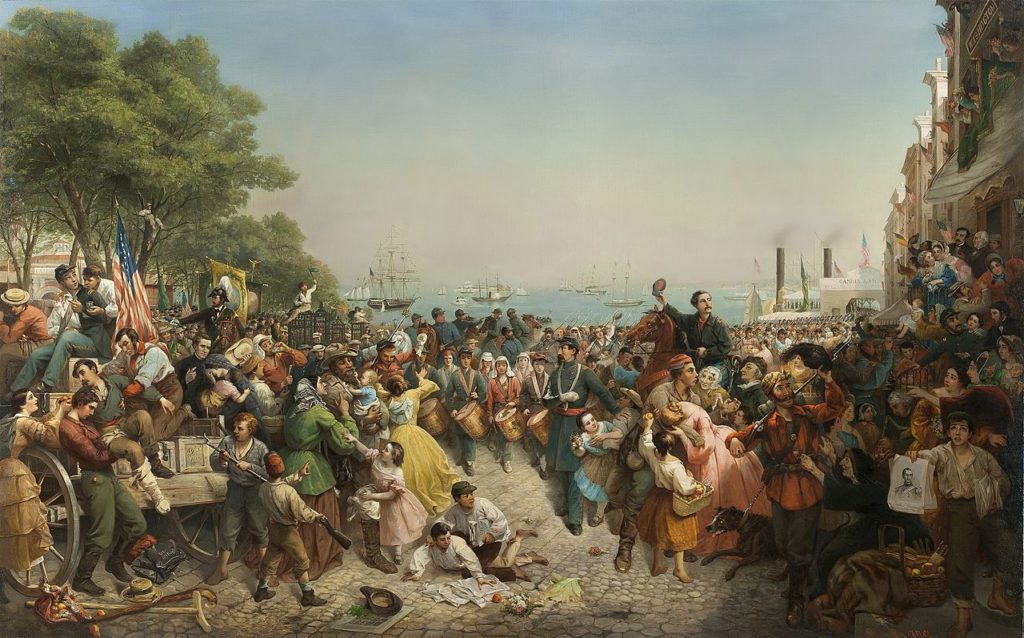 The Return of the 69th New York after the Battle of Bull Run, 1861, by Louis Lang. The boy included at Judge Daly’s suggestion is depicted in the right foreground. (New York Historical Society)

The next to speak was Judge Daly. Addressing the painting itself, he remarked how Lang had succeeded in representing “the pomp and glory of war” but also war’s “darker shades.” He pointed to the presence of the wounded, the maimed and the widowed in the image, before addressing the war in a wider sense:

The Judge…in the most solemn and feeling matter alluded to the horrors of this most dreadful of all civil wars, and claimed the right, as an American by birth, though of Irish parents, without offence to his American brethren that they did not look on this struggle with the earnestness they should, but rather that they regarded it as a gala day affair, and that the immensity and grandeur of its operations swallowed up the details of its painful results and important consequences in the future. He declared his solemn belief that, unless they all looked upon it in its true aspect, there would be no conclusion of the strife until it had been brought to the heart and home of every one in the most awful manner. (5) 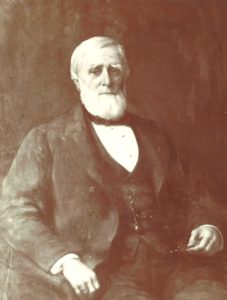 It is interesting to note Daly’s view that there remained a widespread failure to appreciate the cost of the conflict, even a month after Antietam. It is likely that his Democratic background also influenced his remarks. Like Louis Lang, Judge Daly concluded by drawing attention to General Corcoran, noting with respect to the painting that “His absence was more noticed than his presence,” a comment that elicited resounding cheers. Following this portion of the evening Corcoran and his staff had to depart, as the latest portion of his new brigade had just arrived from Buffalo. As they left, Corcoran remarked that the date on the “Prince of Wales” flag reminded him of the coincidence that the 69th had been organised on 11th October, that it was the 11th October when they refused to parade for the Prince of Wales’ visit in 1860, and that now this painting was first exhibited on the same date. Those who remained in the gallery reportedly enjoyed the flow of wine and humour until the “wee hours o’morn.” (6)

An examination of the unveiling of Louis Lang’s painting allows us to place this striking composition in its historical context. It is both a celebration of the marital spirit of Irish New York and a call for their continued support of the Union war effort. At the same time, it reflects a realisation of what the prosecution of the war was costing in human terms. It is worth also considering the image as a commercial creation. Advertisements to view the image at Knoedler’s Gallery ran in the local press, and undoubtedly attracted considerable interest. The New York Irish-American Weekly concluded it’s report by encouraging readers not to be shy about putting their hands in their pockets to pay it a visit:

The picture is now, and will continue for some time, on public exhibition, at Mr. Knoedler’s Gallery, 772 Broadway, and as the work was an undertaking of pure and disinterested patriotism on the part of Mr. Lang, and has resulted in such a beautiful and substantial tribute to Irish loyalty and pluck, I trust that sons and daughters of old Inisfail will flock in crowds to the Gallery, and give the talented artist substantial proof of their heart appreciation of his success in portraying an event that has become historic. (7)

Recent years have seen Louis Lang’s creation undergo a complete restoration, and it is once again on view for the citizens of New York. Anyone wishing to see it today can do so at the New York Historical Society.

Advertisement for Lang’s painting of the return of the 69th, with admission prices, 25th October 1862. A reminder that the painting also served a commercial market (New York Irish-American Weekly)

New York Historical Society. Return of the 69th (Irish) Regiment, N.Y.S.M. from the Seat of War.