Large numbers of Irish documents are to be found among the vast collection of 19th century military pension files housed in Washington D.C.’s National Archives. Among the most fascinating are official extracts of 19th century Irish Censuses. Today, the earliest surviving complete Census of Ireland dates to 1901. The 1861 and 1871 Irish Censuses were destroyed soon after they were taken, while the 1881 and 1891 Censuses were pulped in the early 20th century. Famously, the vast majority of the Censuses from 1821, 1831, 1841 and 1851 were lost during the Irish Civil War, when Dublin’s Four Courts was set ablaze during the fighting of June 1922. Their absence is keenly felt by historians of 19th century Ireland and her diaspora. This post takes a look at those rare survivals– extracts which are now preserved thousands of miles from the homes they once enumerated. (1)

Patrick McCullough enlisted in 1862, and served as a First Class Fireman during the Civil War. He spent the majority of the conflict aboard USS Sachem and USS Fort Jackson. Patrick continued his naval service on and off periodically until 1871, leaving the sea behind with a “Gods of Liberty” indian ink tattoo on his right forearm as a memento. It was nearly four decades after his service before Patrick went in search of a pension, and one of the grounds he did so was due to general debility. He included an 1841 pension extract for his family from the townland of Attagh, Co. Tyrone, having his name on the entry highlighted with an asterisk. He was living in Brooklyn at the time, and presumably ordered the copy from Ireland in order to prove his age. (2)

James Morrison was a Landsman aboard USS Commodore Barney during the last year of the American Civil War. He married Bridget Doherty in Brooklyn in 1878, and it was Bridget who would send to Ireland from Brooklyn for a census copy when she was seeking an increase in widow’s pension in 1916, due to her for being over 70 years of age. Bridget selected the 1851 Census, adding with it a note:

Census was taken 66 years ago. I was then 8 years old making my age now 74 years. Line 7 of record from Ireland shows my record. 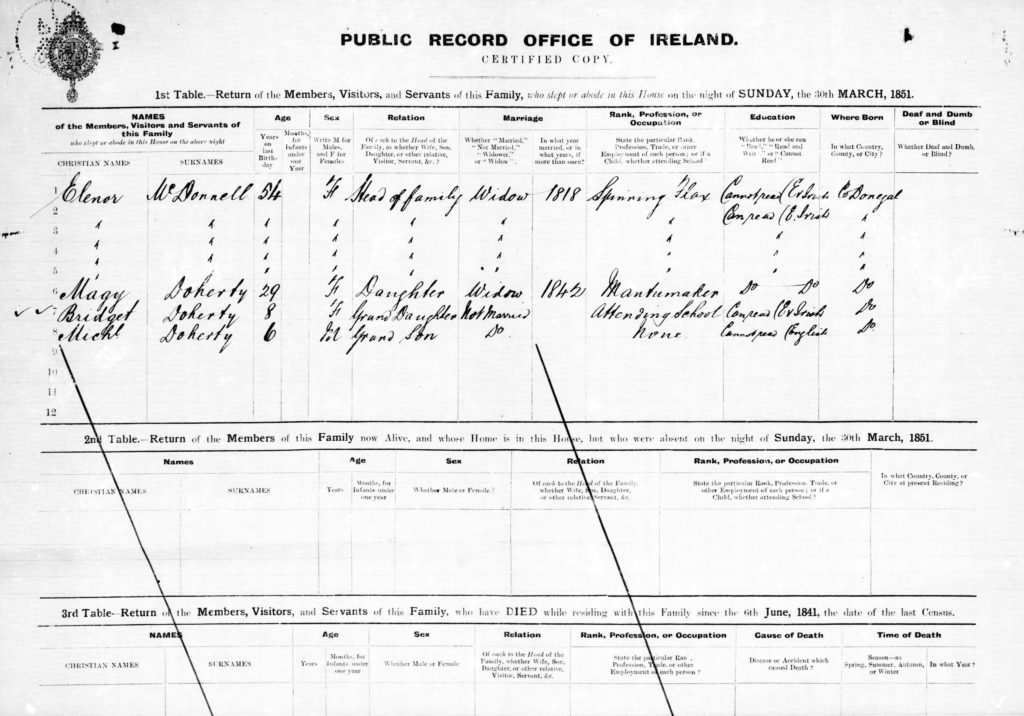 Another file to feature an extract from the 1851 Census is that of William Sweeney. A First Class Boy and Landsman between 1862 and 1865, he spent the majority of his time aboard USS Rhode Island and USS Nereus. In 1870 he married another Donegal native– and another Sweeney–  in Philadelphia. Her name was Hannah, and in the 20th century she also went about seeking an increase in her widow’s pension having passed 70 years of age. When Hannah inquired about how she might satisfactorily prove her age in 1916, she received a communication advising her that:

If you can furnish a public, church or family record showing the date of your birth, or any other proof showing that you are over 70 years of age, you should do so, returning this letter with the evidence submitted.

Hannah had her agent contact the Public Record Office of Ireland for evidence, and received the below covering note from the Four Courts. 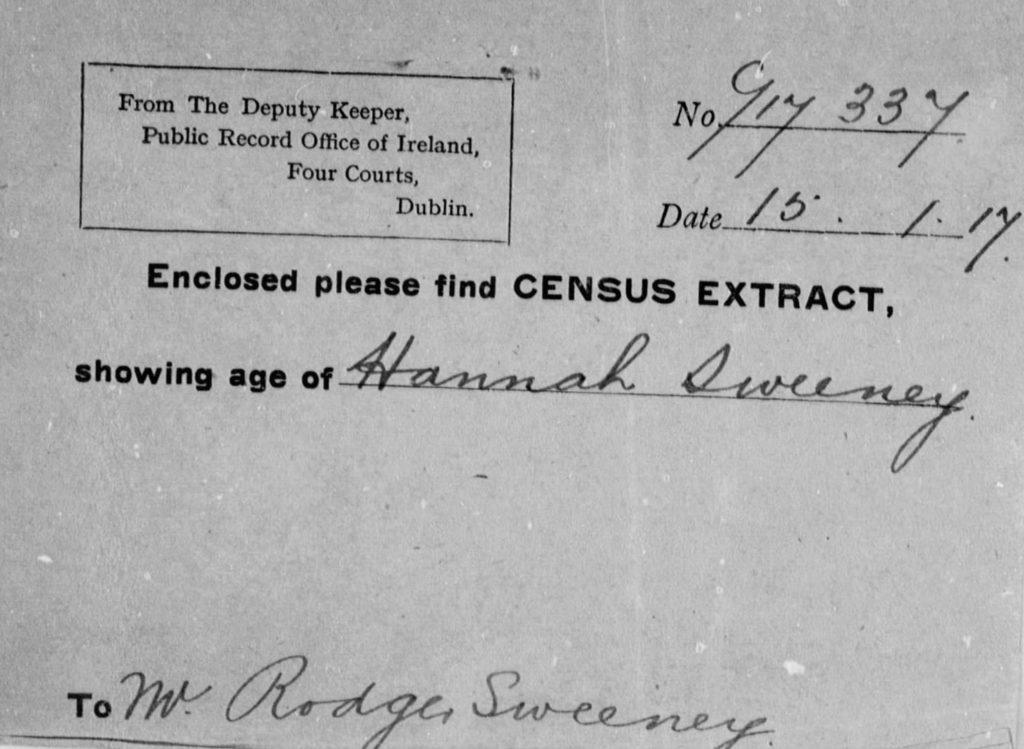 Also enclosed was the certified copy of the 1851 Census, showing Hannah as an 8-year-old in Arryheernabin townland, Co. Donegal, details sufficient to prove her case with the Pension Bureau. The Census extracts further demonstrate the sheer range of Irish documentation that can be found in American military pension files, symptomatic of a large emigrant population who often had to reach back across the Atlantic, and across decades, in search of the official documentation they needed to secure monies in later life. 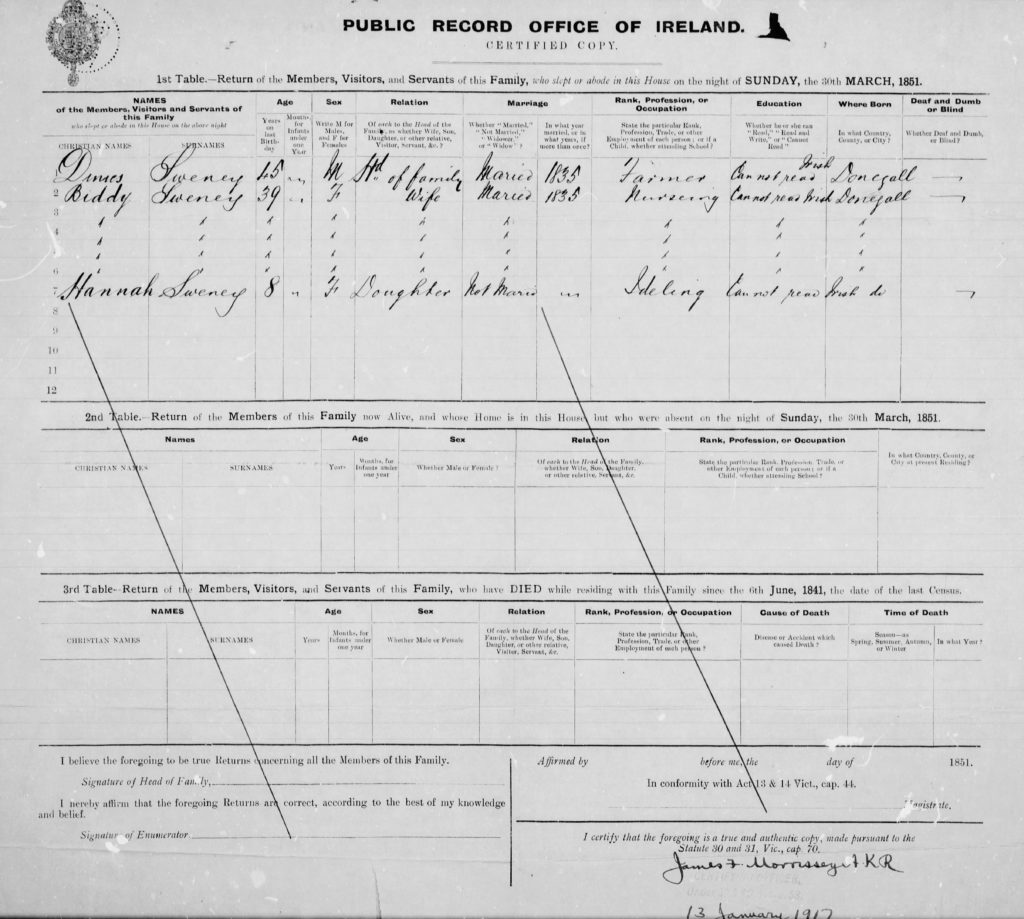