Perhaps the two most famous images of Catholic Mass being celebrated during the American Civil War are those of the 69th New York State Militia and 9th Massachusetts Infantry exposed in 1861. Though these photographs are very familiar to us, the high-resolution versions provided by the Library of Congress Civil War Glass Negatives and Related Prints collection allows us to delve deeper into the body of these images, picking out specific elements in finer detail. This can often offer us new perspectives on the photos, something that has been frequently highlighted by groups such as The Center for Civil War Photography and by the work of individuals such as Garry Adelman. 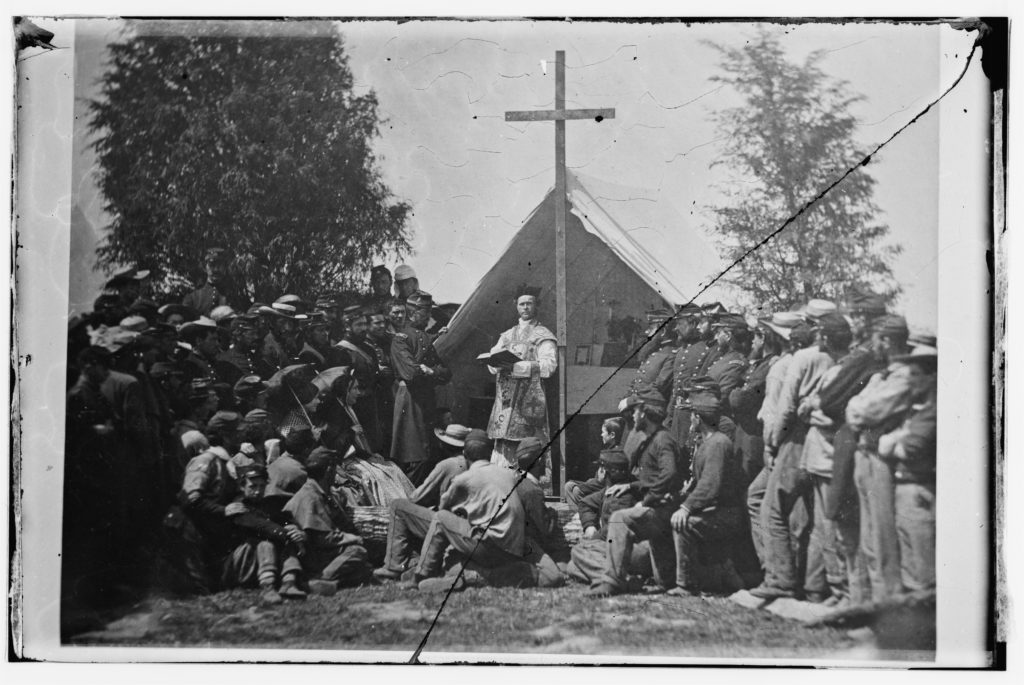 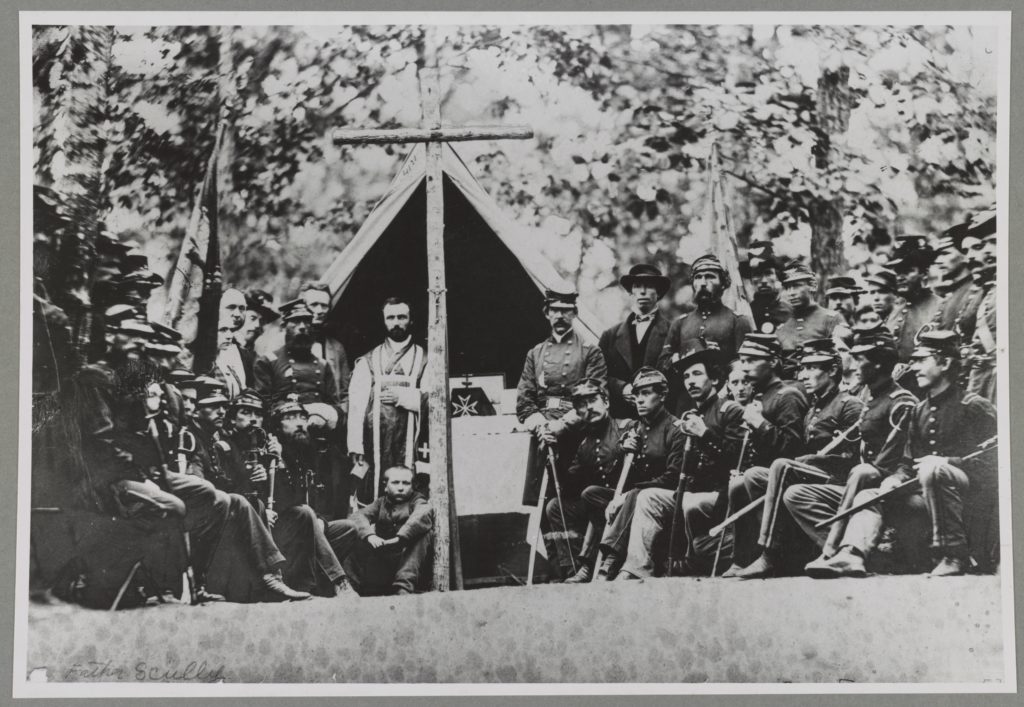 9th Massachusetts Infantry Camp near Washington D.C., 1861. The Irish unit’s biggest trial of the war would come the following year at the Battle of Gaines’ Mill, where they would suffer the highest casualties of any Union regiment.  (Library of Congress: LC-DIG-ppmsca-34231) 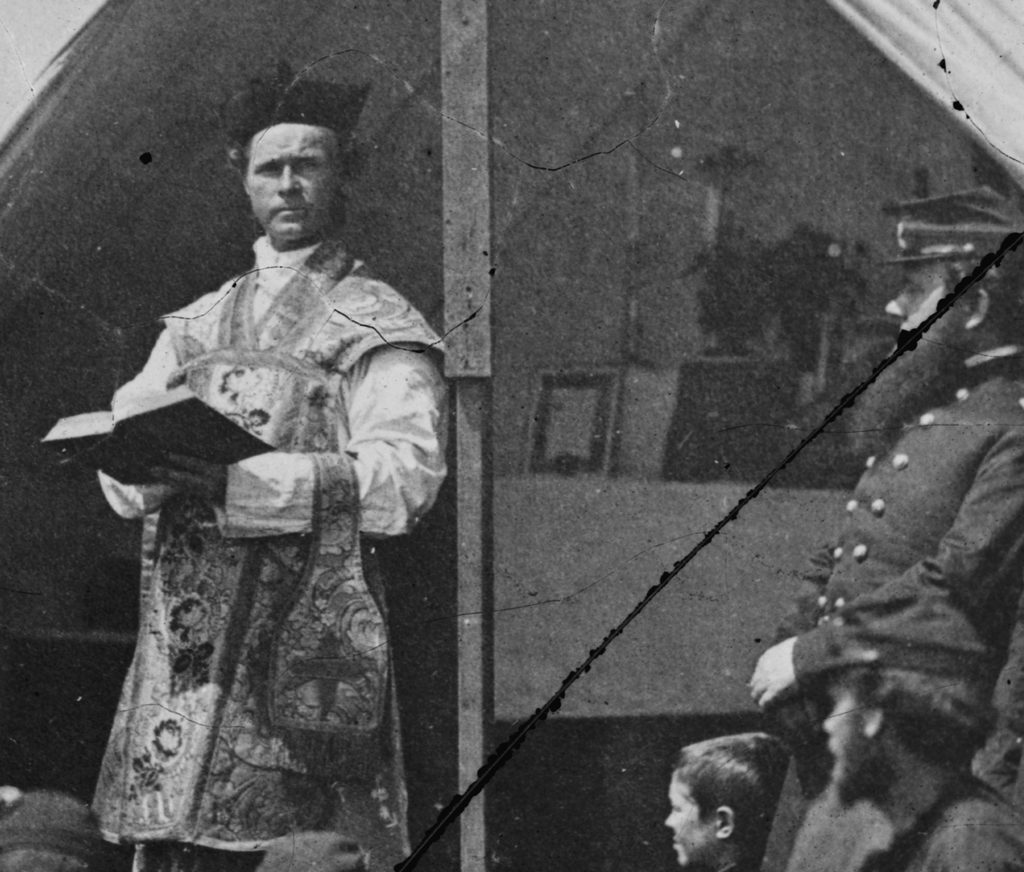 A detail of Father Thomas Mooney, Chaplain of the 69th New York State Militia in his vestments, with the temporary altar behind him. Father Mooney would get into hot-water during the militia’s time at Fort Corcoran for blessing an artillery piece, an action that led to his recall. (Library of Congress) 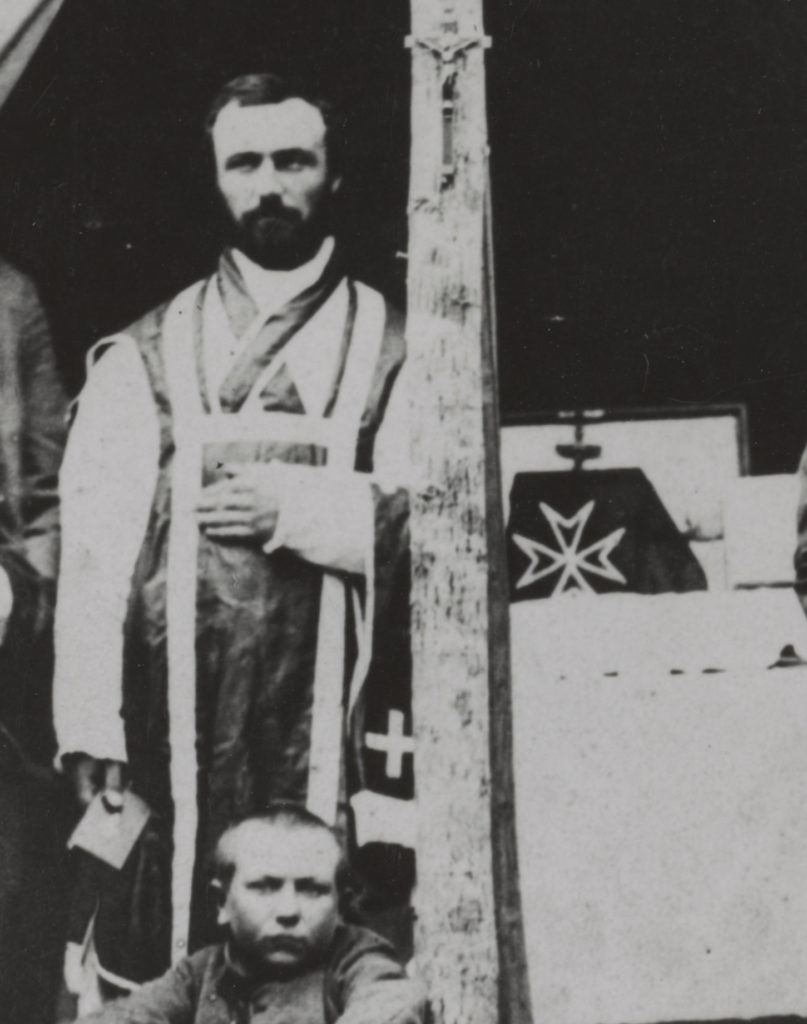 Father Thomas Scully of the 9th Massachusetts in a similar pose to that of Father Mooney. It seems likely that the young boys positioned beside both priests may have acted as altar boys during the service (Library of Congress) 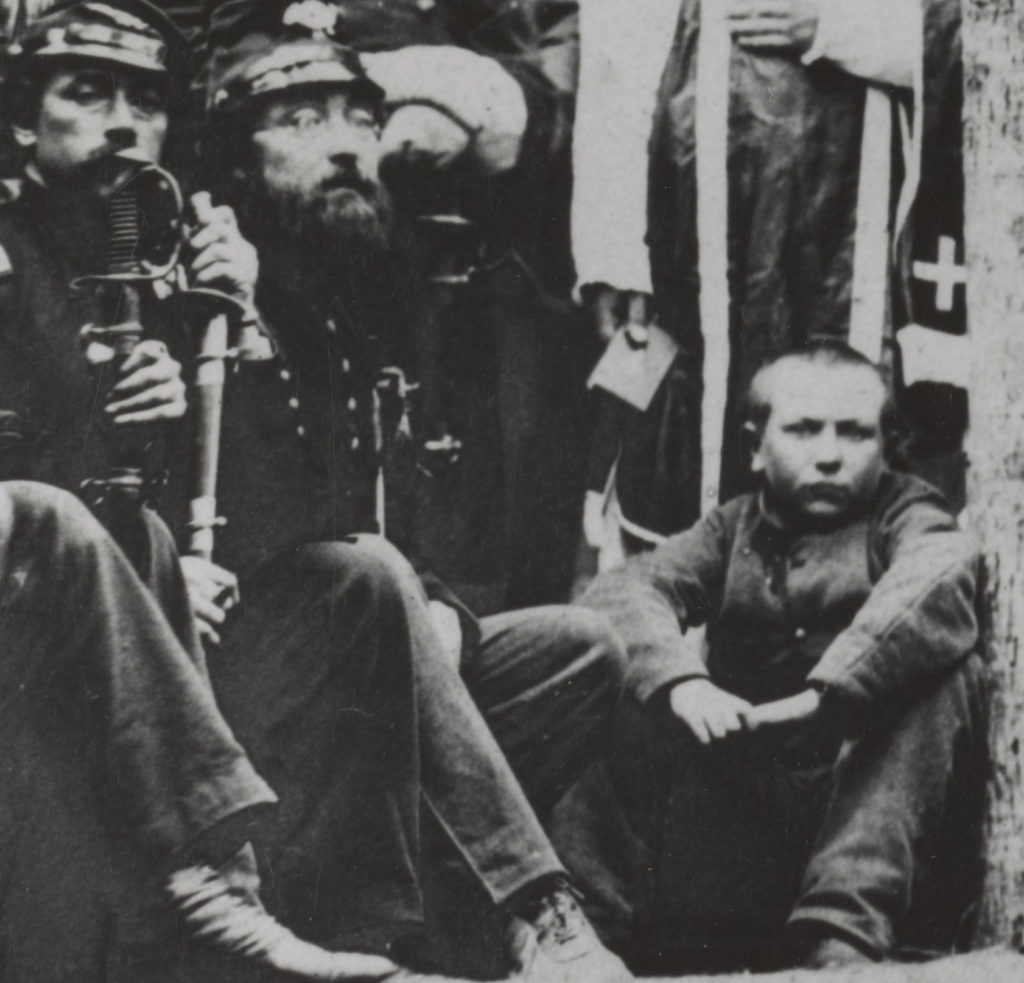 A more detailed look at the boy sitting by Father Scully’s feet. Note also the bespectacled officer of the 9th beside him, who in this shot at least bears a striking similarity to John Lennon! (Library of Congress) 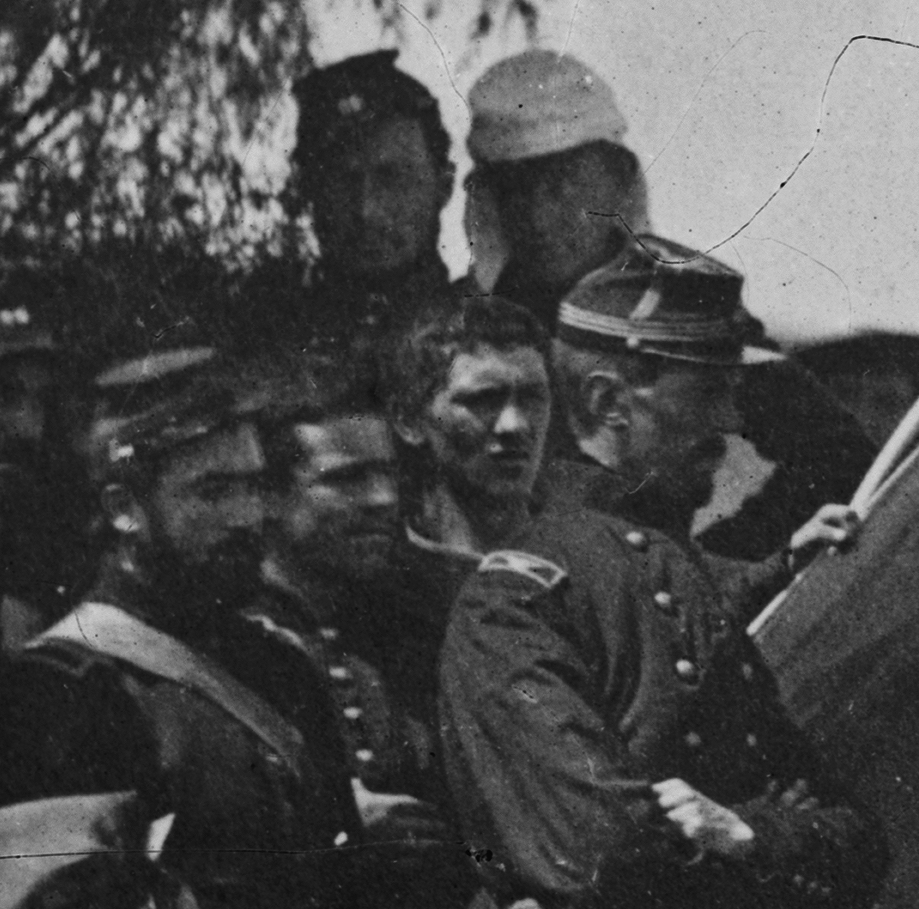 In both images the Colonel of the regiment occupies the same position, to the left of the priest as we view the photograph. Both Colonel (later Brigadier-General) Michael Corcoran and Colonel Thomas Cass would lose their lives during the war. In this close up of the 69th New York State Militia exposure, Michael Corcoran wears a rather stern expression. The two men in the background looking at the camera are worthy of note, with the number ’69’ clearly visible on the kepi of the soldier on the left, while the individual on the right appears to be wearing the headgear of the 69th’s Company K, the Zouave element led by Thomas Francis Meagher (Library of Congress). 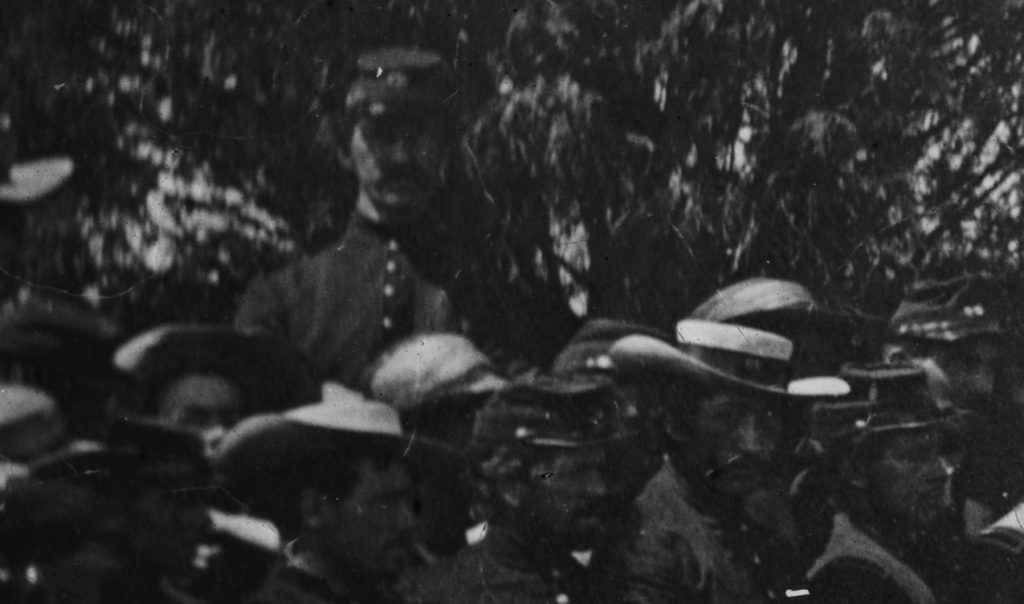 Another detail of some of the men in the 69th New York State Militia image, showing the variety of headgear that was being worn, including straw hats (Library of Congress) 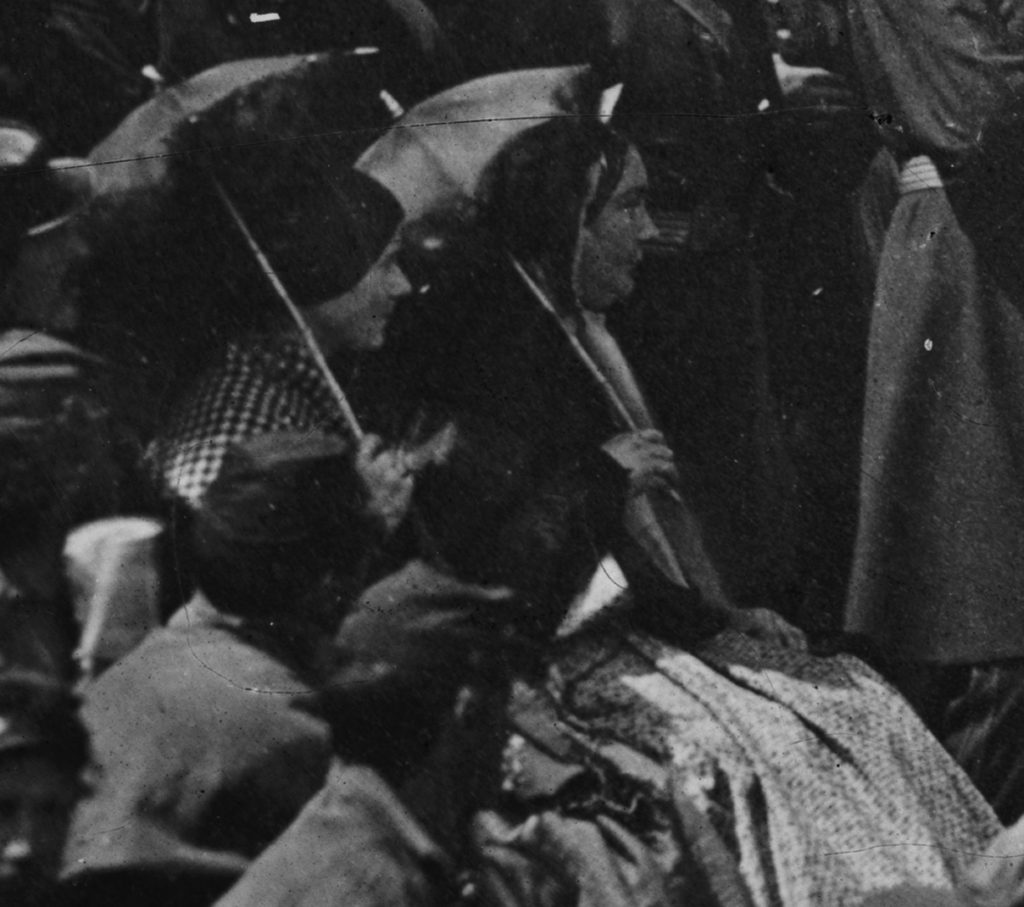 Perhaps the most interesting detail of the images are the women who are present. Here is a view of two of the ladies in the 69th New York State Militia photograph, presumably officer’s wives. Both hold parasols, presumably to shield them from the sun. I have never come across an identification for these two women, but would be pleased to hear from anyone who has (Library of Congress) 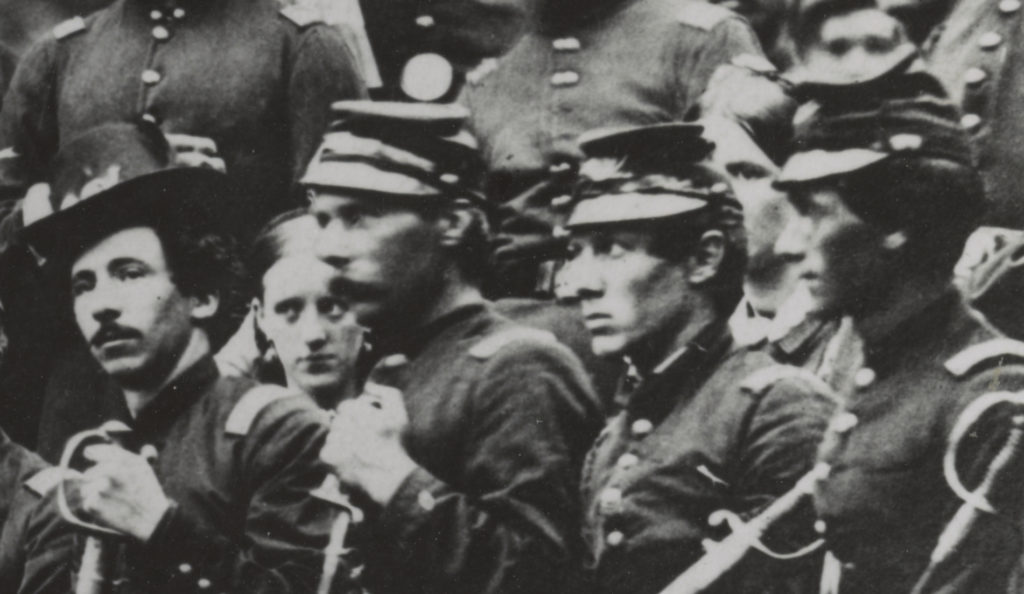 Although much harder to spot, there are also a number of women in the 9th Massachusetts image. This detail shows us two of them, sitting in the row behind the officers. The man at left is Patrick Guiney, who would go on to command the regiment and suffer a grievous wound at The Wilderness. His edited correspondence from the war has been published by Dr. Christian Samito (Library of Congress) 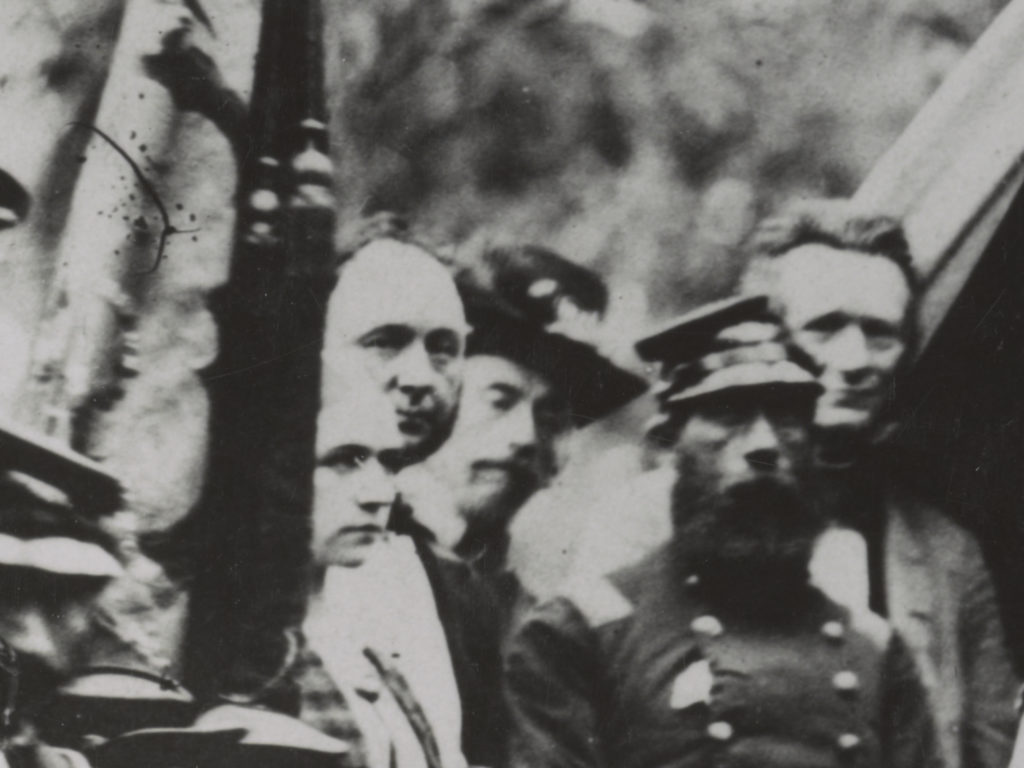 I had never noticed prior to taking a closer look that there is another woman in the 9th Massachusetts image, seen here standing beside the regimental colors. Again, I would be interested to know her identity if any readers are aware of it (Library of Congress)