The latest in the Document Focus series see us return to the Aran Islands, off the west coast of Co. Galway. It looks at another emigrant family who experienced loss in the American Civil War, and how one of the collateral results of that loss was to provide us with evidence for both chain-migration and the maintenance of transatlantic emigrant networks in the nineteenth century.


The site has previously explored the impact of the American Civil War on the Aran Islands (which you can see here). Bartholomew O’Donnell was born there around the year 1832. It is not clear which of the three islands was his home, though there is a Bartholomew O’Donnell recorded in the townland of Carrownlisheen, Inishmaan (Inis Meáin) in the 1850s, possibly a relative. A little over three decades later Bartholomew found himself on the other side of the Atlantic, living in Portland, Maine. On 24th February 1864 the islander made the decision to enlist, following a well-worn route for Irish emigrants by joining the regular army. He duly became a private in Company B of the 17th United States Infantry, being recorded as a former farmer who stood 5 foot 8 inches in height, with grey eyes, dark hair and a ruddy complexion. Less than six months later he was dead, killed in action at the Weldon Railroad, Virginia on 18th August 1864. (1)

The mark of Margaret O’Donnell, an Aran Island emigrant to the United States (NARA/Fold3)

Back in Portland, Bartholomew left behind a widow. Her name was Margaret, and she now had to set about proving her relationship with her husband. She began that process the month after Bartholomew’s death, appointing local lawyer Freeman Bradford as her attorney. In her initial statement, Margaret claimed that she had wed her husband on Christmas Day 1848, when both could have been little more than 16-years-old. She continued that she had no record of her marriage, and that if it existed it was inaccessible, she “having been married in Ireland.” Margaret’s maiden name was Flaherty, one of the most common on Aran during the 19th century. Her parents were John Flaherty and Catherine Clougherty, who had a farm there. As Margaret lacked physical evidence for her marriage, she had to turn instead to those in Portland who had known her in the Old Country. The fact that she was able to do so quickly, in September 1864, is testament to the fact that there was a community of Aran Island immigrants in Portland:

We Thomas Gill and Thomas Feeny residents of Portland, County of Cumberland, and State of Maine on oath depose and say that we are well and personally acquainted with Mrs. Margaret O’Donnell of this City, who is the widow of Bartholomew O’Donnell who was a soldier of the 17th Regt of U.S. Infantry and who has been killed while in the service of the United States as we have been informed and believe. And we further depose and say that ourselves and said Bartholomew O’Donnell and wife were natives [of] Isle of Aran, County of Galway, Ireland, and that we knew said parties previous to their marriage her name then being Margaret Flaherty and that on the 25th of December 1848, said Bartholomew O’Donnell and Margaret Flaherty were married by the Catholic Priest of that place, we knew the fact well at the time although we were not present but knew that said parties have ever since lived together as husband and wife both in Ireland and in this country and the fact of their marriage was never disputed or called in question. Said Margaret O’Donnell has no children; she has remained a widow since the death of her husband as aforesaid. We have no interest whatever in her claim for a pension. (2)

Where on the islands were Feeny and Gill from? The only Feenys (or Feeneys) and Gills recorded on Griffith’s Valuation were on Inishmore (Inis Mór), the main island, and it is reasonable to suggest that the same was true of these two Portand immigrants. Still, as with many widows born in Ireland, this affidavit was not enough, and so Margaret had to arrange to send word to Ireland to obtain an official transcript from the parish registry. The Catholic Church usually charged a fee for this service, but obtaining once also relied on the maintenance of transatlantic connections between immigrant communities and those at home. On 24th October 1864, just over two months after Bartholomew had died in Virginia, Father Patrick O’Malley was already checking the parish registers on the Aran Islands, and transcribing the 1848 entry for Margaret. (3) 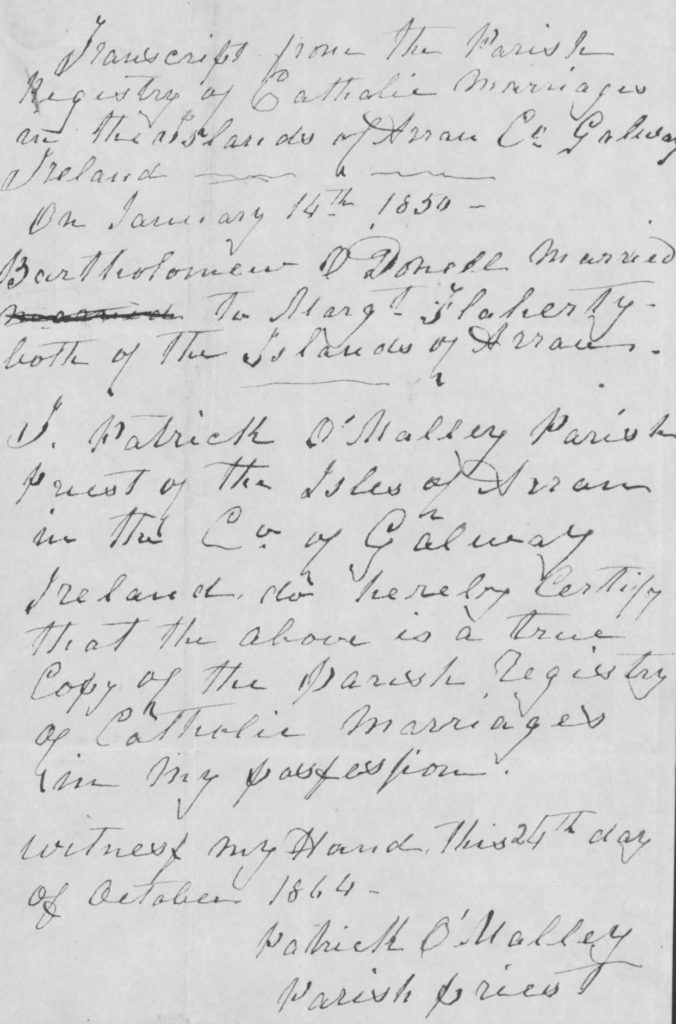 The provision of the registry extract was one of the factors that saw Margaret’s pension application approved on 10th March 1865. She would stay in Maine for the remainder of her life, working as a domestic servant and housekeeper. She is likely the Margaret O’Donnell recorded on the 1870 Census working as the housekeeper for the Sheriff of York County in Alfred, Maine. She passed away of heart disease in Portland at the age of 59 on 21st March 1893, and was laid to rest in Boston, Massachusetts. (4)