Picturing the McNamaras: Images of the Irishman whose final letter home was cut from his body at Cold Harbor

Picturing the McNamaras: Images of the Irishman whose final letter home was cut from his body at Cold Harbor

On 2nd June 1864 Hubert McNamara of the 155th New York Infantry, Corcoran’s Irish Legion, prepared a letter for his wife. He was aware that the following morning he would be going into action; he was among the men of the Army of the Potomac then preparing to assault the Confederate lines at Cold Harbor. Stuffing the letter in his pocket, he went into the attack with the words still unsent. Five days later, Captain Dexter Ludden of the 8th New York Heavy Artillery and his men moved about the battlefield, burying the bodies of those who fallen during the charge. As they turned over the lifeless forms seeking means of identification, they came upon the hastily penned lines in one of the corpse’s pockets– Hubert had not lived to post them. Cutting the letter from Hubert’s body, Ludden made sure the words were sent back to his now widowed wife, Mary. The story of the McNamaras is one I have discussed before, and is also featured in my new book The Forgotten Irish: Irish Emigrant Experiences in America. The reason I am returning to them again is due to one of their descendants, Ruth Davis-Hastler. Ruth recently passed on images of both Hubert and Mary that she has in her possession, and which she has kindly permitted me to share with readers. For me, seeing the faces of those of whom we write adds greatly to how we experience their stories. With that in mind, I am reproducing the original McNamara story below, which can now be read with an improved awareness of the couple to whom it pertains. (1) 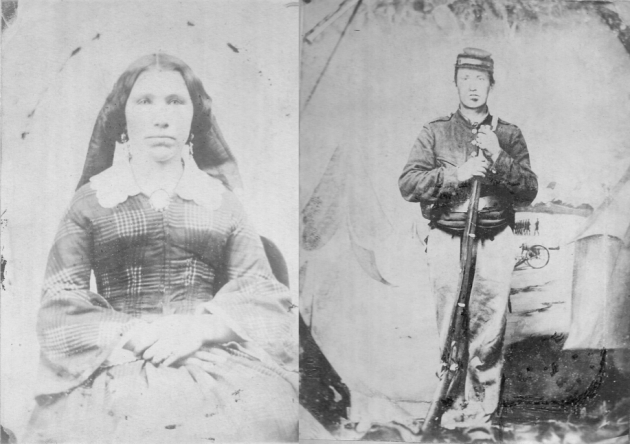 This is what Dexter Ludden wrote on the back of one of the pieces of paper recovered from the body:

This was cut from the pocket of a man I had buried last eve– he was killed– June 3d 1864– & buried on the spot where he fell.

The place was marked by a cut on a tree where his head lies by Sergt Ewell of my company.


The body that Dexter Ludden and his men had buried was that of Irishman Hubert McNamara, a private in the 155th New York Infantry, Corcoran’s Irish Legion. Hubert had enlisted in Buffalo on 28th August 1862, when he was 34 years old. Before becoming a soldier, Hubert had supported his wife Mary and three children by working as a cartman. He was described as 5 feet 6 inches in height, with hazel eyes, brown hair and a light complexion. Hubert had married Mary Donovan on 2nd January 1859, but that had not been his first marriage. Hubert’s first wife Margaret (née McGrath) had passed away in Hudson, New York on 26th January 1855, leaving Hubert to support their three year old daughter Maria alone until his remarriage. By 1864, Mary had borne Hubert two more children at their home on Exchange Street; Thomas, who arrived on 30th November 1859 and Maria, born on 6th May 1852– his youngest daughter was only a month past her second birthday when her father met his death. (3)

Location where 8th New York Heavy Artillery attacked at Cold Harbor. The 155th New York assaulted the Confederate position advancing to the left of this regiment. Some of the 8th would later bury Hubert McNamara (Damian Shiels)

By 2nd June 1864, the day Hubert wrote his last letter, Corcoran’s Irish Legion had been with the Army of the Potomac for less than a month. By the standards of many other brigades, the first 18 months of the Legion’s service had been relatively quiet. That had all changed in May 1864, when they joined up with the Army of the Potomac at Spotsylvania. In the days following, the Irishmen had to become accustomed to almost constant combat– and ever mounting casualties. It was in this context that Hubert penned the few words to his wife on 2nd June. He was aware when he wrote them that he was going to be involved in an assault on the Rebel works the following day. Given the strength of the enemy’s position, many of his unit would have been apprehensive about what lay ahead. The 155th was brought into battle at Cold Harbor by Captain Michael Doran. As he dressed his men’s lines for the advance, they were temporarily shielded from fire behind a slight ridge. When they moved forward beyond this cover they could see the main Confederate line some 150 yards away, but they would never reach it. A storm of fire erupted from the Rebel position. One member of the regiment recalled how the ‘balls commenced literally to mow us down,’ while another said of the attack that ‘it was murder, not war.’ The Irishmen never stood a chance; by the time they got to within fifty yards of the enemy position the charge was halted, and was soon forced back. The slaughter cost the 155th some 130 casualties, almost half their number. Unfortunately Hubert was one of those to fall, with the newly written letter to his family unsent in his pocket. (4)

The sheets of paper recovered from Hubert’s body were included by his widow in her pension application, in order to prove both Hubert’s death and her relationship with him. They are transcribed below for the first time and labeled as Sheet 1 Obverse?, Sheet 1 Reverse? and Sheet 2 Obverse. It is written in faded pencil which, together with their exposure on the battlefield with Hubert’s body, makes transcription difficult. They are reproduced below as Sheet 1 and Sheet 2, with the original transcription accompanied by an edited version for modern readers. (5)

…almigty god that we will soon get tru with them I all right soe far thank be tow the almighty god for his merci [illegible] possible [?] to I am [ad] dressing you with a few lines hope tow find you and the children in good helth as the departure thes few lines leves mee me in at present thank be to the almighty god for his to me we are fighting with rebble for last 10 days and we have drove them for as much 30 miles but there is grete many of our men kild and wonded but the purty well sourrounded in the [?] [Sheet 1 Reverse?]

Camp of the armi of the portommack 7 miles from Richmond mi Dear wife and children I take the favorable opportunitie [?] [illegible] tell what moment I wold get kild or wonded but I trus in god for his mercis tow me there is afful fight ing going on her we ar fight ing knight and fight ing day my Dear wife an children there is no thing more that I can let you know now it I have now time

armi of the portom mac 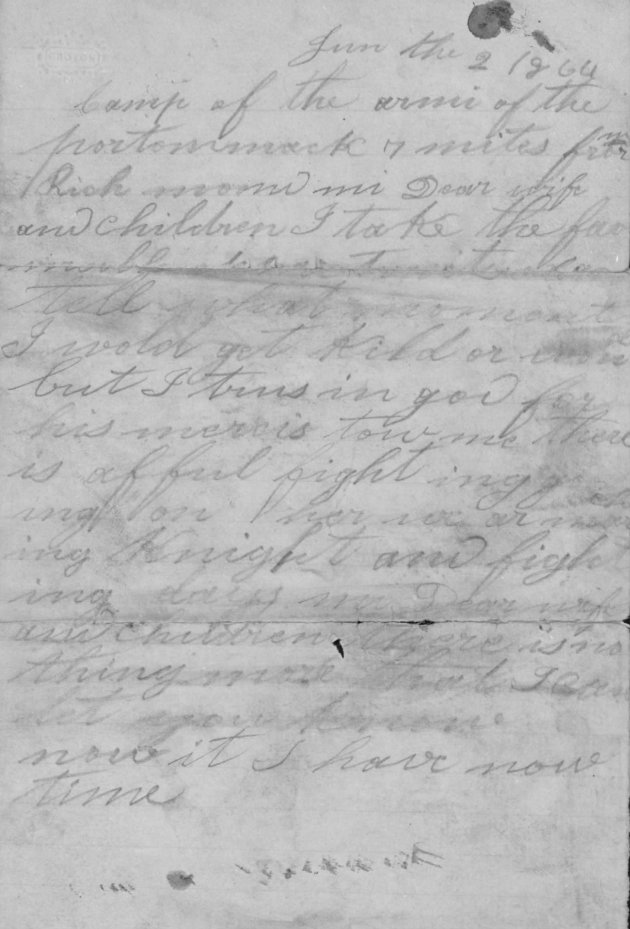 The last words written by Hubert McNamara, hours before his death at the Battle of Cold Harbor (National Archives/Fold3)

…almighty God that we will soon get through with them. I [am] alright so far thanks be to the almighty God for his mercy [illegible] possible to, I am addressing you with a few lines. I hope to find you and the children in good health as the departure [of] these few lines leaves me in at present thanks be to the almighty God for his [mercy] to me. We are fighting with [the] Rebels for [the] last 10 days and we have drove them for as much [as] 30 miles, but there is [a] great many of our men killed and wounded but they [are] pretty well surrounded in the [?]

Camp of the Army of the Potomac 7 miles from Richmond. Dear wife and children, I take the favourable opportunity [illegible] tell what moment I would get killed or wounded, but I trust in God for his mercy to me. There is awful fighting going on here, we are fighting night and fighting day. Dear wife and children there is nothing more that I can let you know now I have no time.


It is very hard to get paper or ink [or] anything else here. John Dempsey is well and also Michael Lawler is, I wish that you would tell his wife. There is nothing more my dear wife and children then I think, so goodbye for a while. No more at present from your affectionate husband Hubert McNamara, 2nd Corps, 2nd Division, 4th Brigade, Company I, 155th New York, Army of the Potomac. Goodbye write soon. (7)

The precise order in which Hubert’s letter was intended to be read is not clear from the separate pages. I have interpreted their order as presented above based on content. I believe that the first page (Sheet 1 Obverse?) was part of a letter Hubert may have been writing previous to his arrival at Cold Harbor. In it he refers to fighting the Rebels for the ‘last 10 days’ which would place it around the 28th May. I suspect he may have then found himself in front of the works at Cold Harbor and, realising that he was about to go into action, abandoned his previous letter to jot down a few words in the event of his death. If this is the case then it makes the letter all the more poignant. The section titled ‘Sheet 2 Obverse’ may have also been written at Cold Harbor, though that is not clear. Captain Ludden wrote his note to Hubert’s wife on the back of this page. Of those comrades mentioned in Hubert’s correspondence, Cold Harbor was also Michael Lawler’s last battle. He was mortally wounded, leaving behind a wife and four children. John Dempsey seems to have also been wounded at Cold Harbor, but ultimately recovered. Hubert’s wife Mary lived a long life after her husband’s death, remaining a widow for more than half a century. The elderly Irishwoman passed away at the Holy Family Home in Williamsville, New York on 2nd September 1916. (8)