"My Cousin told me…that all my family were in America": A Search for 1860s Cork Emigrants

"My Cousin told me…that all my family were in America": A Search for 1860s Cork Emigrants

The widows and dependent pension files often give us an extraordinary insight into 19th century emigration. Occasionally these are from the perspectives of those who remained in Ireland. I recently came across just such a letter, written in late 1863 by Dan McCarthy in Cork to his brother Ted in America. Its detail reveals just how cruel– and unexpected– the separation of families could be. Dan, who had been working out of Ireland for a few years (possibly at sea), returned home to discover that his entire family had emigrated. He had little information on them, and wrote to Ted to see could he find out something about their whereabouts and circumstances. Unfortunately, although we can see what he had to say, his brother Ted would never have the opportunity to read it. 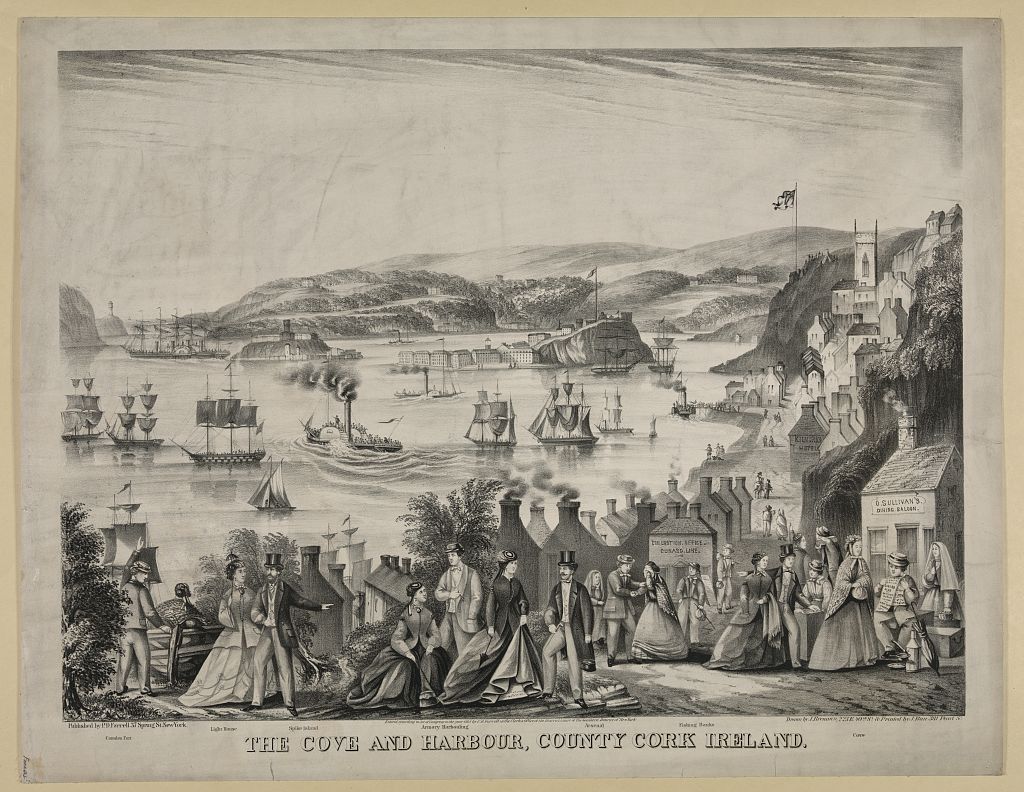 My Dear and loving Brother

I beg the liberty of respectfully writing to you to let you know that I landed in Cork in May last two years thinking to see father mother brothers and sister Johanna knowing that Mary Anne and Margaret were in America.

I must here say that my cousin Edmond Murphy told me that all my family were in America and that they sent Johanna off themselves and that my father came from America and that he was a shocking man for cursing and speaking bad words.

However it was not long until my poor father herd that I was in Cork and he came to see me we had a fouter together and I wanted from him my poor mother’s directions or any of your’s directions but he told me that he did not know where to write himself for that he wrote to you and that the letter was sent back to him and that he felt very uneasy about you that he was sure that something was the matter with his poor son or that he would have a reliefe before then as that he received five pound from you not long before– he spoke more of Mary Anne than all the rest.

He told me that Margaret married against his consent and that he had a man of his own choosing and that she would not look at him.

My Dear Brother I realy believe that my poor father was not right in his head he was as deaf as a stone and you should write down whatever you had to say to him. I never could get the slightest knowledge from him of any of ye he told me once that my mother was full of money that she with a Duch man a very rich gentleman he only stoped a week with me and went off to Carbery he came back again and worked a few weeks in Cork he went off to Crookstown was there a few days and he asked them to send him to his sister to Dunmanway they did so he did not feel well they never wrote to me to let me know that my poor father was ill. I got ready myself and went off to Skibbereen on the West Cork Railway to work in order to be a near him and to do all I could for him. To my surprise Don Carthy the mason told me that my father was dead and buried the day before. I passed my Aunt’s door twice since and would not call. She herd I did so and was surprised at me. I met her son Timothy he was at sea for the last ten years and came home full Captain of a merchant vessel full of money he asked me why I passed my Aunt that was his mother and the he was my first Cousin.

I told him that it was very wrong that she did not let me know that my poor father was ill that I may have the pleasure of weeping over his body as all the rest of my loving family were far away from me. She told me that she had no thoughts that he was so bad and that she had not my directions and that if she had that she might not do so as they little expected that he was so near death. I beg dear Mother to say that he was well cared for and had the Priest and Doctor with the help of God may God rest his soul and the souls of all our family not forgetting the souls of the faithful departed may they rest in peace.

Dear Brother I was told that you maid an inquiry for me to Cousin Ted + in Killarney I wrote to him and he answered my letter by return of post and mentioned to me that he received a joint letter from you and his sister and he sent me your part enclosed in the letter. My loving Tead I am double the man to be able to write to you to know all of my poor mother and brothers and sisters and Dear Tead it is long since your brother Dan shed so much as he did when I red in your letter that you lost a leg for my poor father told me that there were not many in New York able to take a round out of you and that you were a first class brick layer.

My Dear Brother I do not know what to write in this nor shall I be at rest until I receive a letter from you with a full account of my poor loving good mother brothers and sisters and I trust in god that you are not broken hearted for the loss of the leg and that it may not come again you until I see you and ye all I trust that you will keep your spirits up for if I was to swim across that is if I could not go otherwise I shall do all I can to see ye all before long please God. (1) 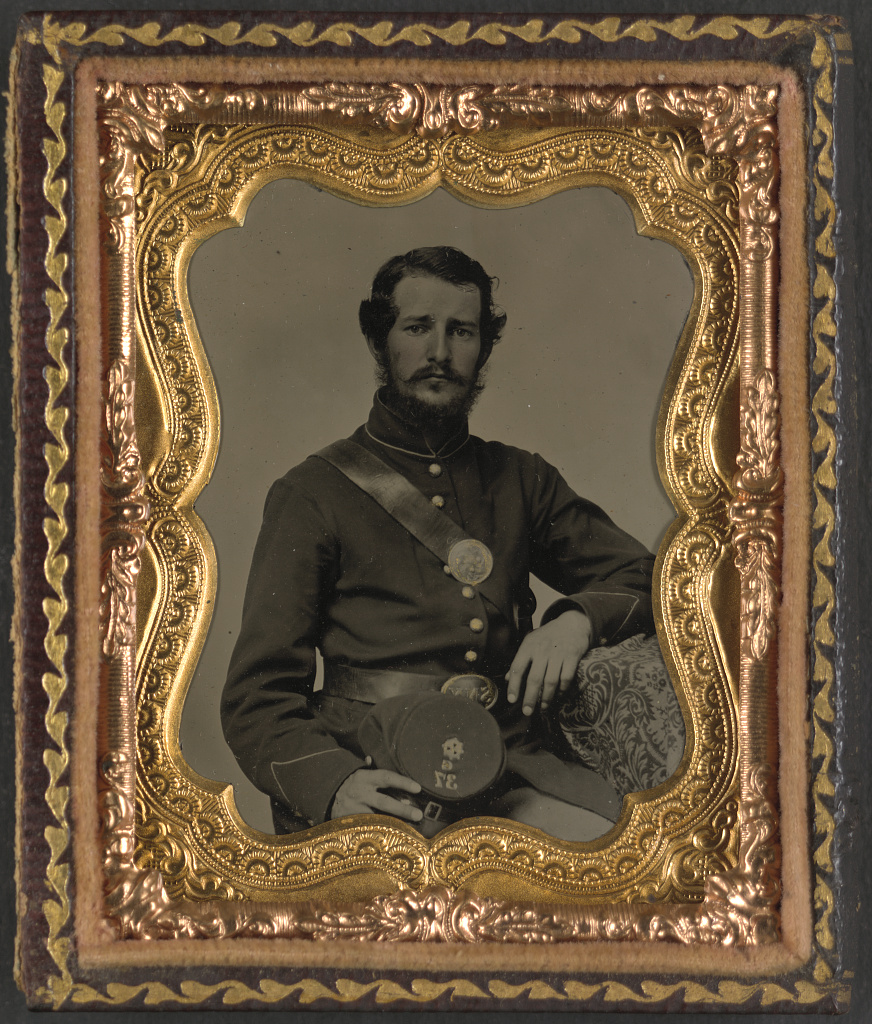 A soldier of the 37th New York Infantry (Library of Congress)

Dan’s letter contains lots of interesting detail. Aside from what it tells us about emigration and the potential for families to be broken apart as a result of it, there is interesting social detail, for example the unsuccessful efforts of Dan’s father to arrange a match for his daughter (and indeed his use of foul language!). The pension file also allows us to piece together something of the McCarthy story. Dan was fortunate that his father was in Co. Cork at all, as he had also emigrated to America with the rest. He had been plying his trade as a mason in New York in the 1850s when he fell from a building and was severely injured. Unable to work, the physician advised him to return to Ireland for the sake of his health. Leaving his wife and children behind, he had retraced his steps back to Cork, where he would later be reunited with his son Dan– though he would never see the family he left behind in the United States again. (2)

The return home of Dan’s father meant that his mother Johanna depended on two other adult sons for support, Justin and Ted. Justin died in the late 1850s, making Johanna solely reliant on Ted. Ted (the intended recipient of the letter) had enlisted as a 25-year-old on 25th May 1861 in the 37th New York ‘Irish Rifles.’ He eventually rose to the rank of Sergeant in Company K, a position he held at the Battle of Fair Oaks, Virginia on 31st May 1862. There he was shot in the right knee and left on the field. He was briefly captured by Confederate forces, but refused amputation and was left for dead. Some comrades recovered him on 1st June and brought him into Union lines where the leg was removed. Ted survived this procedure and was officially mustered out with the rest of his regiment, joining Company 26 of the 2nd Battalion, Veteran Reserve Corps. However, the effects of his wound followed him. In late 1863 he became gravely ill and was hospitalised, ultimately passing away at the General Hospital at Fort Schuyler, New York on 8th September 1863 of “paralysis” brought on by amputation. By the time Dan sat down in Cork to pen his letter to Ted, his brother had already been dead for nearly a month. (3) 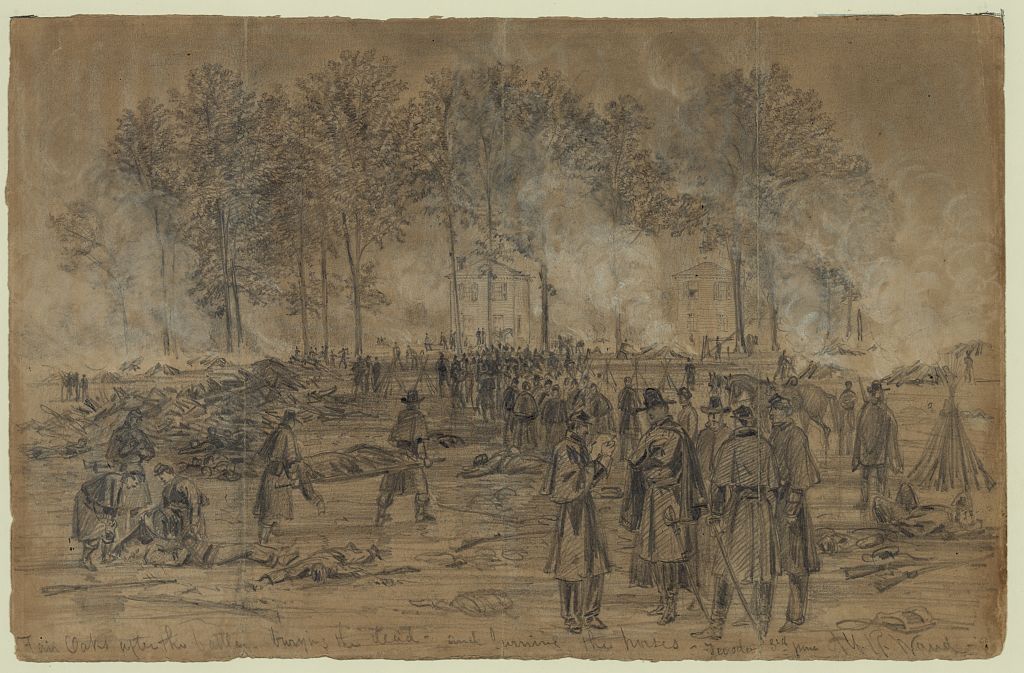