"Mike, The Color Bearer": How a Famine Emigrant Became an American on the Battlefields of Virginia

"Mike, The Color Bearer": How a Famine Emigrant Became an American on the Battlefields of Virginia

On the afternoon of 30th August 1862, the outcome of the Battle of Second Bull Run hung in the balance. James Longstreet’s Corps had been hurled against the Union left, and desperate fighting broke out along a key portion of the field known as Chinn Ridge. As Federal officers sought to buy time to organize a defence, Colonel Nathaniel McLean’s brigade of Ohioans was fed into the maelstrom. Among their number was the 75th Ohio Infantry, who advanced to the crest of Chinn Ridge with their National Colors held aloft by a young Irish emigrant. The 21-year-old Cavan native who steadied himself beneath the Stars & Stripes that day was as fervent a believer in the cause of Union as any native-born American in the ranks. Along with his father he had left Ireland for the United States– and a new future– following the death of his mother during the years of the Great Famine. The dedication and courage he had displayed in previous months had seen Michael Brady become a popular choice to carry the regiment’s national banner. But at Second Bull Run, it would also make him one of the prime targets for the Confederate infantrymen who were converging on the Ohioans position. (1) 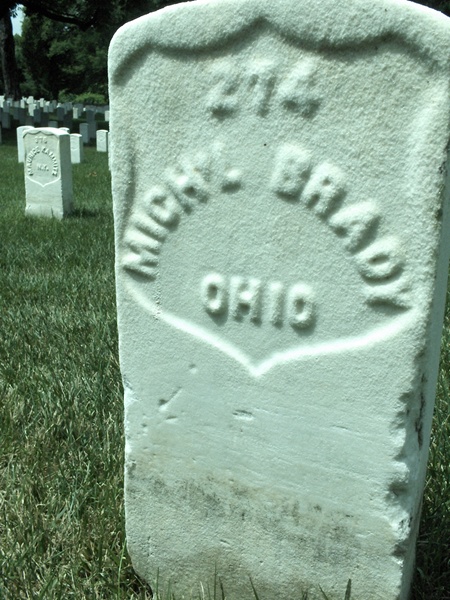 The grave of Michael Brady (Image by Stan Jett, Find A Grave)

Michael Brady’s parents had been married “at the Priest House in County Cavan near Old Castle” in 1829 by the Reverend Peter Brady (the Brady surname is one particularly associated with Cavan). Michael was born there around 1840. He was still a boy when the Famine descended upon Ireland– it is unknown if it was the cause of his mother’s death, which occurred in August 1848. Sometime after this date Michael’s father Patrick decided to depart for America with his young son. They made their home in Newark, New Jersey, but it wasn’t long before ill-health began to plague Patrick. From at least the mid-1850s, the main responsibility for earning money fell on young Michael. Prior to 1861 he took on the blacksmithing trade, bringing in on average between $8 and $10 a week. But the American Civil War was just a few months old when Michael made a decision to enlist. Making arrangements for his father’s comfort, he enlisted at Camp McLean, Cincinnati, Ohio on 31st December 1861, becoming a private in Company A of the 75th Ohio. (2)

Michael had come to an agreement with Louis Smith in Newark to provide both board and clothing for his father while he was away (Michael had previously also boarded in the Smith home). This Louis agreed to do, for a cost of around of $4 per week. Safe in the knowledge that his father was looked after, Michael could concentrate on doing his best to preserve the country which he made his home. It wasn’t long before he and his unit were sent to Western Virginia, and they were among those who faced off against Stonewall Jackson at the Battle of McDowell on 8th May 1862. It was here that Michael first demonstrated his mettle. When the regiment’s Color Sergeant, E.M. Gordon, was felled during the fight, the national flag began to roll down the hill towards the Rebels. Michael reportedly leapt from cover to retrieve the Color, and continued to expose himself to fire as he waved it defiantly at the enemy. It was this act which ultimately led to him receiving the honour of carrying the United States flag, though his appointment was delayed as the 75th’s Colonel initially felt Michael’s height– he was apparently only 5 feet 4 inches tall– was an impediment. (3)

Plaque commemorating the Battle of McDowell (Image by Pete Unseth)

Atop Chinn Ridge on the Second Bull Run battlefield that 30th August, the Ohioans had initially repulsed the first disjointed Confederate attacks they encountered. However, as fresher and more organised Rebel forces began to disgorge from the woods around them, their situation soon became desperate. Lieutenant George Fox turned to Michael, jesting that “They will get the Colors today.” The young Cavan man replied “If they get the flag, they’ll get old Mike. Now mind that, Lieutenant.” As the Ohioan brigade came close to being overrun, Brady once again demonstrated his almost reckless bravery. In an effort to rally the men, he sprang forward with the Stars and Stripes, waving the flag “back and forth in a defiant manner.” Unsurprisingly, bringing down the Colors of the 75th was a task many of the Southerners set themselves. At battle’s end, the standard was said to have been pierced by some 90 bullet holes. The hail of fire directed at it and it’s bearer had predictable results. The staff was shattered, and a ball struck Michael in the chest, passing through his body. Though he fell to the ground, he somehow managed to drag himself up, raising the Colors once more. Upon rushing forward to take the flag, Captain Andrew Harris had to prize each of Brady’s fingers from the staff in order to release his grip. (4)

Eventually McLean’s brigade was forced to retreat, and though their actions had helped buy some time for a more organised Federal response, the battle was ultimately lost. A few days later Lieutenant Fox sat down write to Michael Brady back in Newark regarding his son:

I am called upon to announce to you the sorrowful news of Michael, your son. In the action of Aug 29th [sic.] while boldly leading the Regt with our Glorious Stars & Stripes he was struck by a bullet in the right breast, the ball passing clean through his body. He was taken off the field but could not be attended to that night. The next day he was taken as I am informed by the Doctors to Washington City. Michael was loved by all who knew him. From our Colonel who commands this Brigade to the Private he is known to be a good brave whole souled soldier. The Colonel has repeatedly asked if he has been heard from and how he is getting along. The Company suffers a severe loss. I believe I can say of him something that i cannot of any other member of the Company. That is he has never had a quarrelsome work with anybody– nor has he been at any time reprimanded for neglect or non performance of duty. Father at one time came into Western Va to carry home the money of the Reg. as his passage back was a dangerous one some men were chosen to escort him among which was Michael. Every letter I receive from Father he makes mention of him and speaks of the hardships they were required to submit to and the especial kindness he paid him. As I have more letters to write to the friends of my killed and wounded I must close. Anything further I may gain in reference to him I shall communicate it to you,

Michael eventually found himself not in Washington, but Alexandria, where he was sent to the U.S. Hospital on Prince Street. It was from here that Patrick Brady received a second letter, written on 24th September:

I agreable to the wish of your son Michael I write to inform you that he was wounded at the battle of Manassas on the 29th of August by a rifle ball entering just above the brest bone and coming out on the back near the lower angle of the shoulder blade the ball nearly severed the wind pipe and then passed through the right lung he was received into this Hospital Sept 3d and died Sept 9th he bore his suffering with the greatest fortitude and was perfectly resigned to his fate. When I informed him that he must die he said “welcome be the will of God I couldn’t loose my life in a better cause” I called a Priest who cam and administered the consolation of religion to him in his last moments. He was perfectly rational to the last & died like a good soldier and christian.

With much sympathy for you in you affliction I am

Michael Brady’s death for the cause of the United States must have had a deep emotional impact on his 64-year-old father– it most certainly had a profound economic one. By the late 1860s he was described as “old, decrepit, weak and failing” and was losing his “physical and mental powers.” He faced a struggle of a number of years to sufficiently prove both his marriage in Ireland and dependency, but he eventually succeeded and was pensioned from 27th December 1867, when he was living at 256 Warren Street in Newark. Michael Brady’s exploits on the battlefields of Virginia were ones his comrades would never forget. He was regularly mentioned in their writing; more than six decades after the Cavan native’s death at Second Bull Run Elias Montfort would write a National Tribune article entitled Mike, the Color Bearer. Held Onto the Flag Until He Fell Mortally Wounded at Bull Run.*  Today the 21-year-old rests at Alexandria National Cemetery, where he is buried at Plot A, O, 274. (7)

Prince Street Hospital in Alexandria as it appears today, where Michael Brady died.

The story of Michael Brady is an intriguing and compelling one. We will never know if his mother died as a direct result of the Great Famine, but there is little doubt that calamity had a profound impact on his life. Like many other Irish emigrants, he and his father likely felt they had little choice but to emigrate in order to offer themselves the prospects of a better economic future. But his story also tells us much about how many Irish embraced their new home. As has been repeatedly shown, Irish emigrants, even where the opportunity presented itself, rarely returned to Ireland. As we repeatedly see in the Irish pension files, many fully committed to the United States, and did so fervently, even where they retained a deep love of their homeland. There are surely few better examples of this than Michael Brady. Having left a land which offered him little, he was ready to give his all for the American Republic which was now his country– he readily giving his life for its preservation.

*I am keen to access a copy of this article, which I have not been able to obtain- if any readers have access to it I would be very grateful for a copy!

** None of my work on pensions would be possible without the exceptional effort currently taking place in the National Archives to digitize this material and make it available online via Fold3. A team from NARA supported by volunteers are consistently adding to this treasure trove of historical information. To learn more about their work you can watch a video by clicking here.

Hennessy, John 1993. Return to Bull Run: The Campaign and Battle of Second Manassas.

Reid, Whitelaw 1868. Ohio in the War: Her Statesmen, Her Generals, and Soldiers. Volume 2.