Photographs of Wounded Irishmen from the American Civil War

Photographs of Wounded Irishmen from the American Civil War

The sometimes captivating, sometimes horrifying images of wounded soldiers taken in Washington D.C.’s  Harewood Hospital in 1865 have featured in a number of posts on this site (see Looking into the Face of a Dying Irish Soldier, One of Our Brave Men Twice Wounded: An Image of Corporal William Kelleher, 125th New York Infantry and Recruited Straight off the Boat? On the Trail of Emigrant Soldiers from the Ship Great Western). These are far from the only Irishmen to feature in this remarkable collection. I decided to take a look at another four images of New York Irishmen, to see what could be uncovered about their stories and injuries through an examination of their lives via a range of sources. 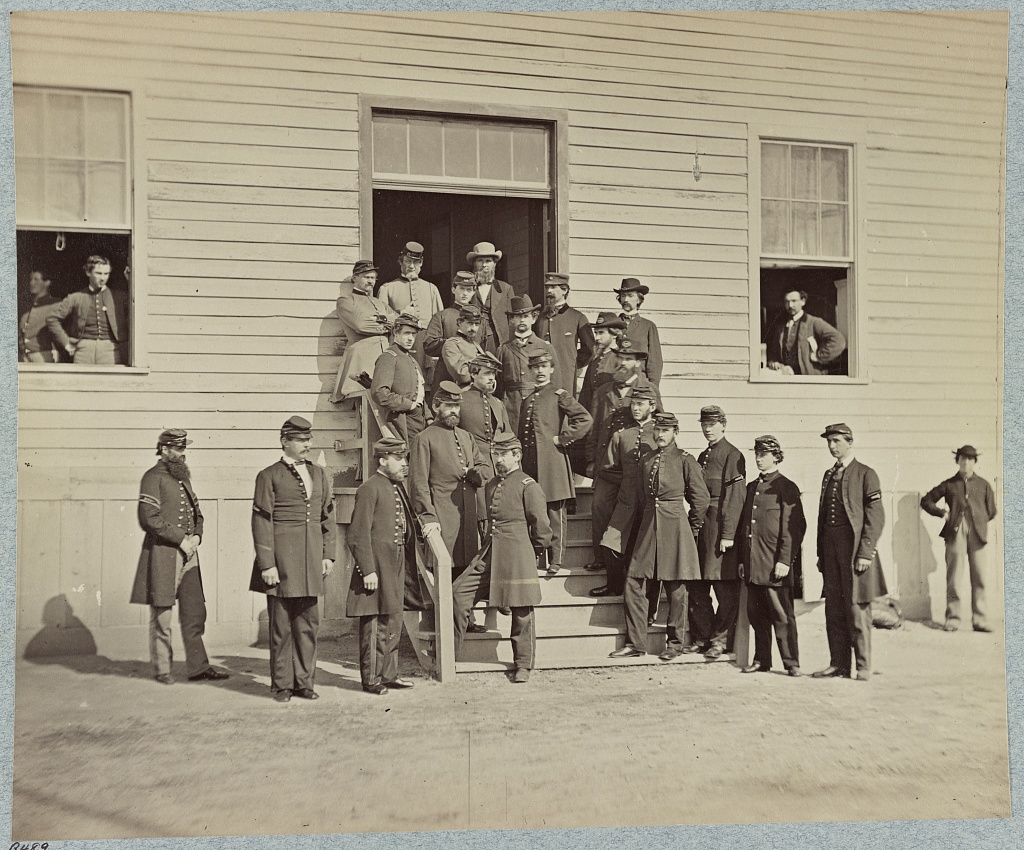 Thomas was born in Ireland in 1842. He was a 22-year-old laborer when he decided to enlist, becoming a substitute for Thomas Davies. He joined up in Poughkeepsie, New York on 8th August 1864 and was described as 5 feet 8 inches in height, with blue eyes, brown hair and a dark complexion. Serving as a private in Company E of the 61st New York Volunteer Infantry, he spent his service with the Army of the Potomac outside of Petersburg, Virginia. He was shot in the left hand during the Confederate attack on Fort Stedman on 25th March 1865, a wound which caused him to be admitted to Harewood General Hospital in Washington D.C. on 1st April, where the image below was exposed. The second metacarpal bone and one of his fingers had been amputated on the field (bilateral flap) prior to his arrival. On admission into the hospital he was described as being in a good constitutional state, and was reportedly doing well when he was transferred to the U.S.A. General Hospital in Philadelphia on 8th April 1865. Thomas filed for an invalid pension dated from 13th June 1865, which was granted. I have yet to locate a further record of him. 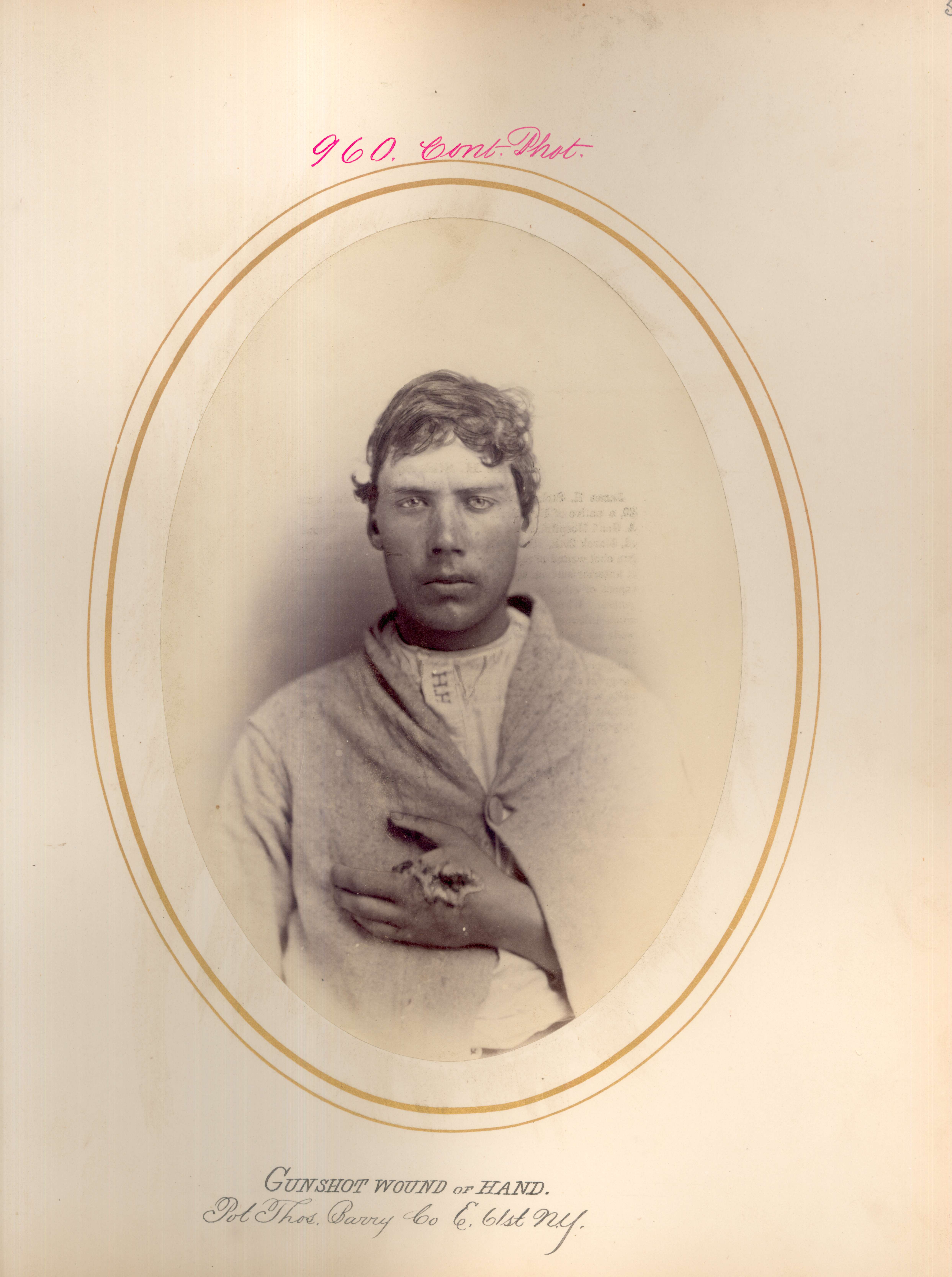 Martin was from Co. Sligo and was a career-soldier, having enlisted in the 1st United States Infantry on 11th September 1858. He served with them in the Western Theater until his term of service expired on 11th September 1863. He was 27-years-old when he joined the 15th New York Heavy artillery only six days later, on 17th September. Mustering in as a Corporal in Company K, Martin was described as 5 feet 5 1/2 inches tall, with blue eyes, brown hair and a ruddy complexion. He was promoted to Sergeant on 1st December 1863. On 25th June 1864 he was wounded in front of Petersburg, necessitating the amputation of his left arm at the upper third, a surgery which was performed at Lincoln Hospital in Washington. He had been in a good constitutional state when that operation had been performed, but an infection set into his arm which spread through his chest. His stump became gangrenous and there was a considerable amount of dead tissue shedding from it. A further operation saw the complete removal of the shaft at the shoulder joint on 29th March 1865. Still not out of the woods, the bone became necrotic nine months after the amputation and several abscesses formed on the stump. Martin was admitted to Harewood General Hospital on 13th September 1865 when this image was exposed. When the photograph was taken he was still in good health, but several fistulous openings which were discharging pus remained. He was being treated with disinfectant, astringtent lotions and the liberal use of internal iron. Martin sought and received an invalid pension on 4th January 1866. He was recorded as dying on 12th April 1900. 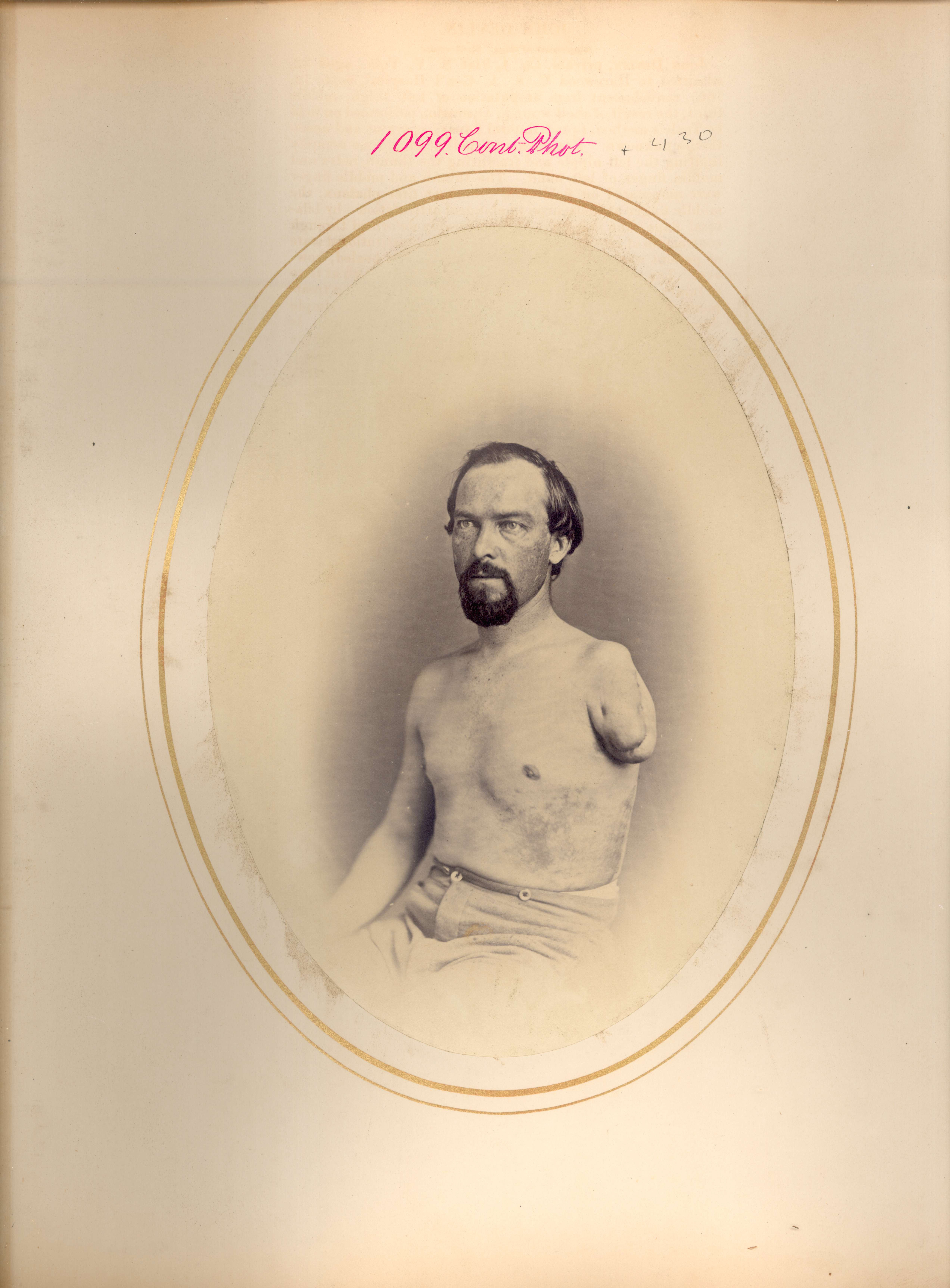 Timothy was born in Cork on 13th April 1847. The 1860 U.S. Federal Census records him living with his family in Manheim, Herkimer County, New York. His 35-year-old father John was a day-laborer, his mother Mary (née Tobin) was 38. Timothy was then recorded as 12-years-old; he had an older brother Owen (14), and younger siblings Thomas (9), John (5), Michael (3) and Ellen (2). As the youngest three children had all been born in New York, it suggests the family emigrated in the early 1850s. Timothy was recorded as a 17-year-old Carder when he enlisted in Little Falls, New York on 26th July 1862– he was clearly significantly younger than this. He was described as 5 feet 5 inches in height, with grey eyes, dark brown hair and a fair complexion. The Cork youth mustered in as a private in Company H of the 121st New York Infantry. He was confirmed as being present at battles such as Winchester, Fisher’s Hill and Cedar Creek. Timothy was injured in the action at Fort Stedman, Petersburg on 25th March 1865, receiving a gunshot wound to the hand which fractured his right carpus and meta-carpus. He was admitted to Harewood General Hospital in Washington on 2nd April 1865, having first been treated at City Point, Virginia. When this image was exposed he was suffering from severe inflammation of his wounds, causing great swelling of his arm and hand which gradually subsided. His treatment was supported by a simple dressing, and by the 26th May his wound was nearly healed, though he did have to live with a permanent deformity. Timothy filed an invalid pension claim which was granted dating from 14th August 1865 and seems to have returned to live in Herkimer County, where he is recorded on the 1890 Veterans Schedule. His widow would later claim a pension based on his service after his death, until her own passing in Little Falls on 1st February 1913. 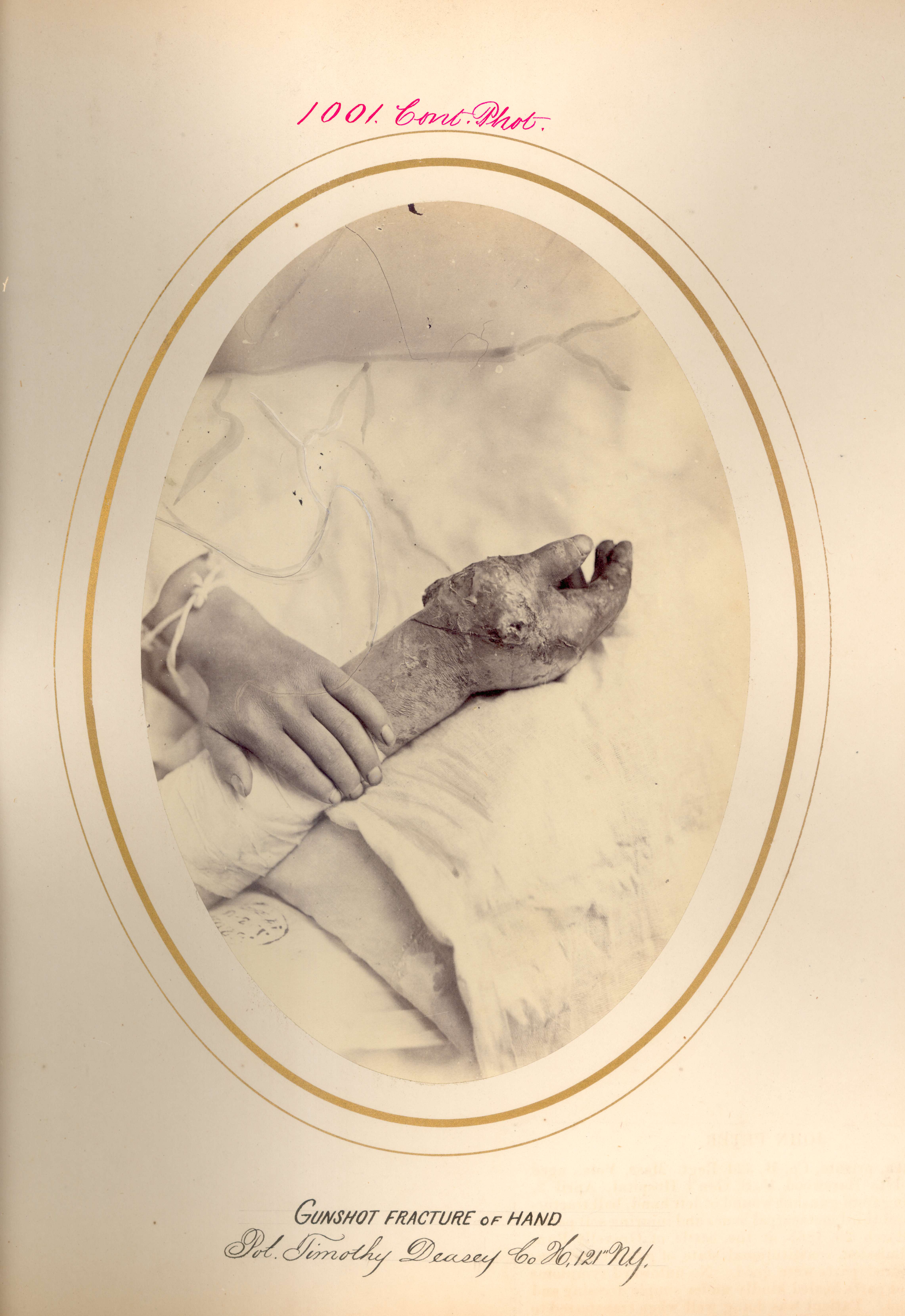 John was a 22-year-old laborer when he enlisted in Albany on 19th September 1864. He had blue eyes, brown hair, a dark complexion and was 5 feet 6 inches in height. He became a private in Company I of the 91st New York Infantry and was admitted to Harewood General Hospital in Washington on 12th September 1865. His left thigh had been amputated in the middle-third following a shell wound. The operation had been performed on the field using Teale’s method (quadrilateral flaps) by an unknown surgeon and anesthetist. Shell fragments had also severely wounded him on the left nipple and fractured his thumb, index and middle finger of the left hand, causing them to also be amputated on the field– the thumb at the first phalanx and the middle finger at the metacarpo phalangeal articulation (by bilatoral flaps). The index finger had been considerably deformed by contraction of the muscle. When admitted John was in a very good constitutional state and his wound had entirely healed. He remarked that he had been in perfect health at the time of his wounding. He responded well to treatment, which consisted of simple dressings and a nourishing supporting diet. Shortly after this image was exposed he was to be fitted with an artificial limb and he was discharged from the service on 30th September 1865. John applied for an invalid pension on 11th October 1865 which was granted. He entered the Eastern Branch of the National Home for Disabled Volunteer Veterans in Togus, Maine on 21st July 1869, and was discharged from there on 3rd January 1870. He applied for readmission on 9th December that year, but his refusal to comply with the conditions of the Board of Management meant he was discharged on 2nd April 1872. By 1890 he appears to have been living in Albany, and his widow subsequently received a pension based on his service. 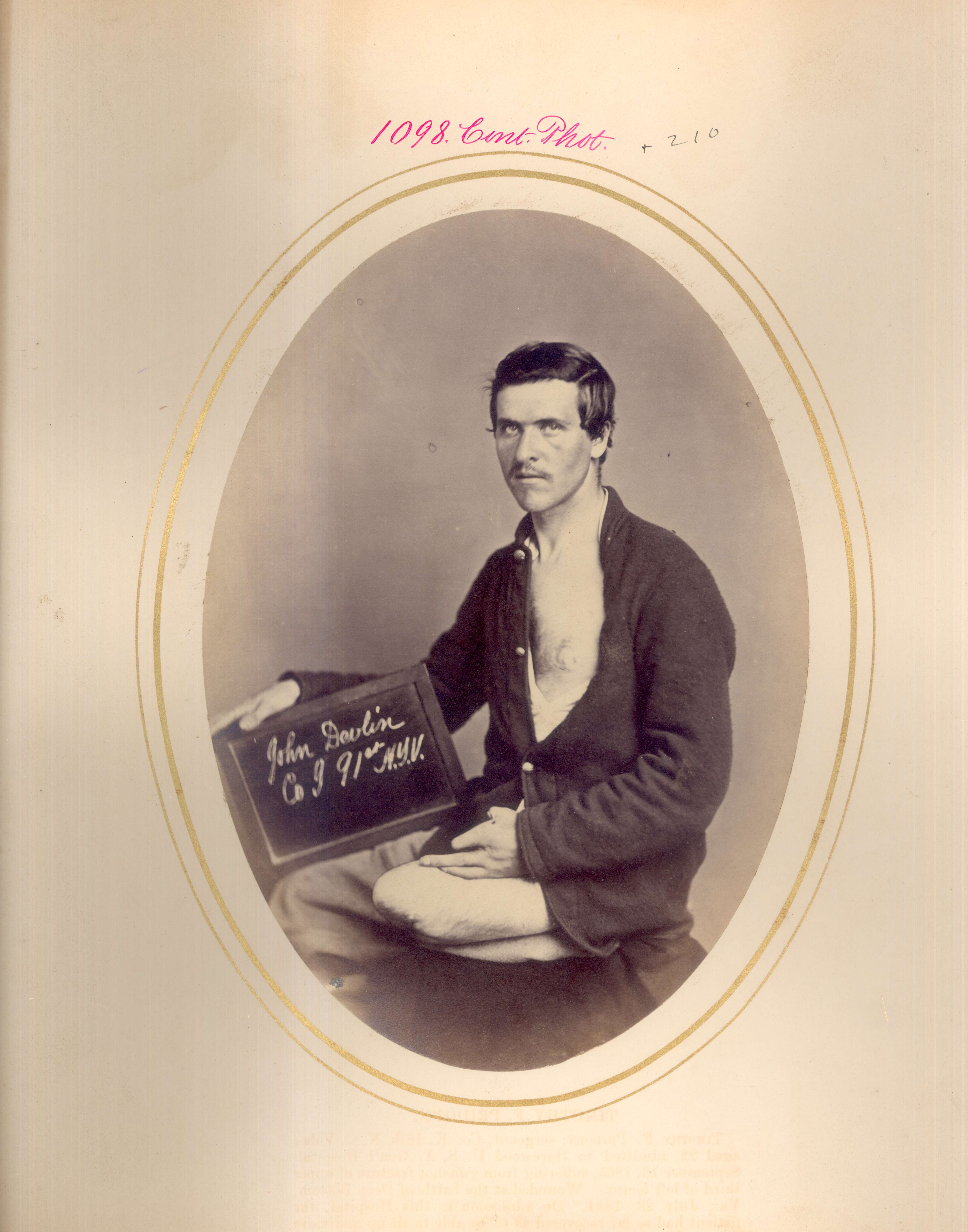