Bonds Between Women & Daguerreotypes of A Dying Man in 1862

Bonds Between Women & Daguerreotypes of A Dying Man in 1862

Families often relied on volunteer nurses to keep them informed of a loved one’s condition in hospital. Over time, bonds could develop between these caregivers and the soldier’s wives far away. The correspondence below, written by Emma Smith from St. Elizabeth Hospital, Washington D.C. to Sarah Welsh in Fayette County, Pennsylvania, are a case in point. This poignant collection of letters charts in some detail the final days of Sarah’s husband Christy Welsh, a man who appears to have been unaware of his impending death. They also contain intriguing detail regarding a request from Sarah for an image of her husband– a request that precipitated an urgent effort to secure a ‘Daguerreotype Artist’ to expose the image of Christy while alive, before all that could be sent was a memento-mori. (1) 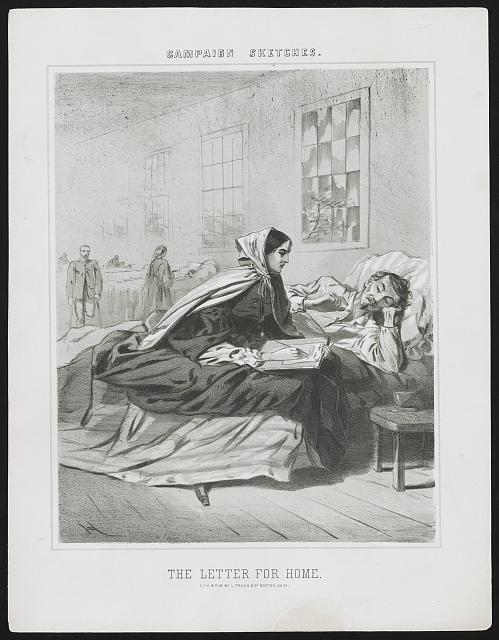 Irish emigrant Christy Welsh had married Sarah Boyle in Pennsylvania in 1843. The 1860 Census enumerated them in North Union, Fayette County, where they lived with Mary (15), Ann (12) Amanda (10) John (8), William (3) and Catharine (1). Another daughter Sarah– aged 5 in 1860– does not appear with them on the census. Of the couple’s stated six children in 1862, only John, Sarah and William were recorded as dependents under the age of 16. Christy was around 41-years-old when he mustered in as a private in the 85th Pennsylvania Infantry on 12th November 1861. The regiment was soon sent to Washington D.C., where on 29th January 1862 Christy was engaged in nightime sentinel duty at Fort Baker outside the city. In the pitch dark he stumbled, falling out of the fort and into the moat. The accident left him with a compound fracture of the thigh. It was that injury which ultimately resulted in his death at St. Elizabeth Hospital, Washington D.C., a little over seven months later. (2)

The first letter from Emma to Sarah was dated 2nd August 1862. It is apparent that Christy will die; clearly Sarah has asked Emma to get an image taken of her husband before the inevitable takes place:

Your letter received your husband is very gently sinking away– he does not suffer is very cheerful. His leg has not mortified but the heat of last month has worn on him and taken his appetite away. He takes egg nog & wine & brandy– anything he fancies we have in plenty– I have sent for a daguerrian artist I am expecting him every moment to take his picture– one of the men is now shaving & changing his shirt– he is much pleased with the idea of having it taken– may Our Father comfort you, 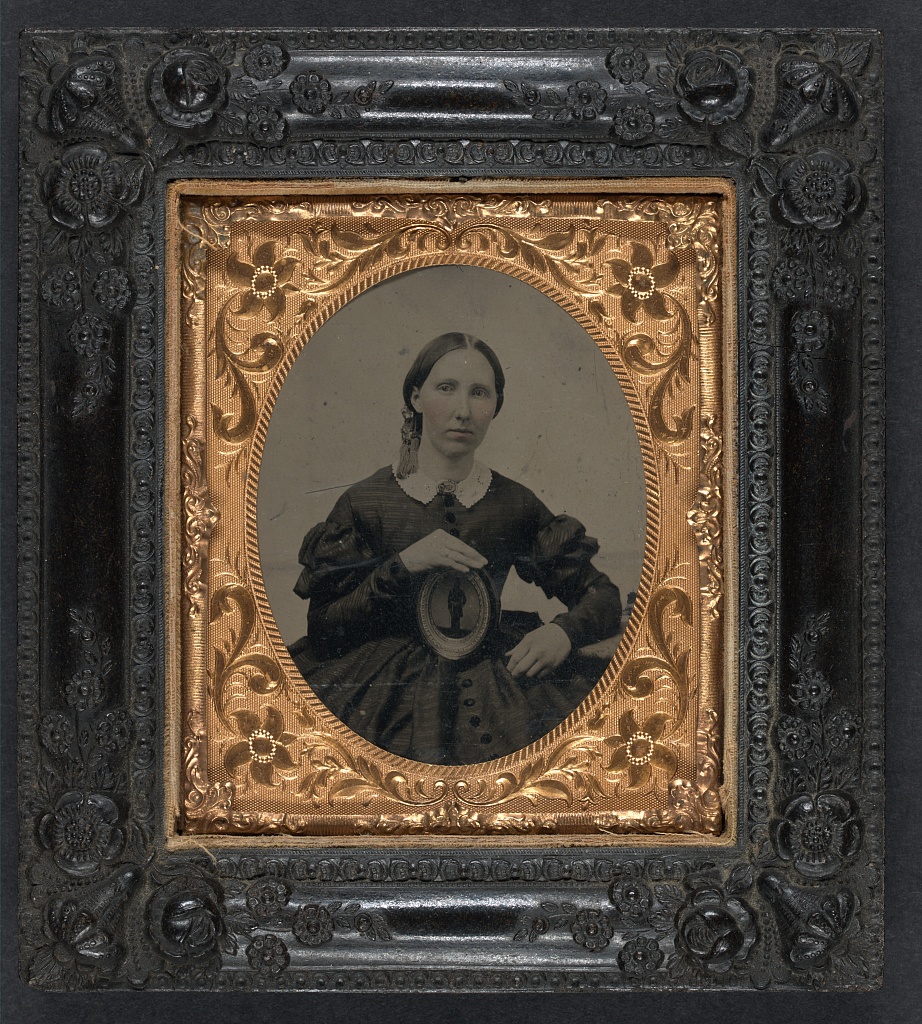 Emma’s next letter to Sarah is written two days later, after Christy’s death. The efforts to have his image exposed before his death are again to the fore, as are the circumstances which prevented this from happening. A memento-mori was now all that could be produced, which was to be sent to Sarah along with some of the clothing he was wearing in the daguerreotype. Emma closes the letter with a detailed account of Christy’s final hours, including a relation of how she told him the Parable of the Sower and the Parable of the Unjust Judge:

Your heart is prepared I trust for the confirmation of all your fears. Last night, Sunday, Heaven’s gate opened wider, angels sung a song of welcome & escorted by an angelic guard your best loved one entered in to receive (no doubt) a victor’s crown– don’t think of him as dead, but gone before to wait and welcome you & the little ones he loved so fondly. Saturday morning he was very much interested in preparing to have his picture taken it seemed to give him new life he was shaved & had on a pink striped shirt, which he fancied very much– I carried him a box of collars and cravats to choose from not new ones but the best we had– he had one of the men stand before him & try several on & chose one which I will send you.

The artist disappointed us he could not get a wagon to bring out his instruments. I sent to town, as soon as I received your letter, for he tells me he spent hours in trying to find a conveyance– engaged one and the harness broke– he feels very badly about it– he came early this morn & has spent all day nearby trying to get a good one. I will send you the best one he took tomorrow.

I think it looks so peaceful– may it comfort you. I put the cravat he selected on for it to be taken. Saturday he was unusually bright & cheerful eat his usual meals & lunch at 11 o’clock– took egg nog– in the evening he had a chill but passed a comfortable night – Sunday morn he wished to be per[k]ed[?] again to have his picture taken– eat two eggs & some toast for breakfast– egg-nog and sponge cake for lunch stewed tomatoes & light pudding with a glass of wine and cup of milk for dinner. At three o’clock I read him one or two of the dear saviours parables in poetry the parable of the sower & the unjust judge– he said they were very good seemed much pleased with them– told me he had been a methodist fifteen years– his wife was a presbyterian spoke of the breast pin I had on asked its cost for his girls were to love pins and ear-hops– at half past three said he would have some egg-nog– at four another chill came on– after it he slept & passed gradually away. May God sustain you. I will write again soon– can I do anything for you. I feel as though I had known you years. The doctor has his descriptive list.

The reverse of the image, which contains a lock of the soldier’s hair (Library of Congress)

Emma sent a final letter to Sarah on 16th August 1862. In it the bond that has developed between the two women is clear– Sarah has clearly asked Emma details about her own family circumstances. Emma revealed that Christy was not aware he was dying, and she could not bring himself to tell him that he was:

Yours of the 10th was gladly received I shall be always sincerely glad to hear from you & your little family and shall feel nothing a trouble I can do for you. As you requested I’ve had the few clothes your husband brought put in his knap-sacks– he had a dress coat & over coat & a few little articles– I’m very sorry– he left his revolver in camp– he spoke of it several times and proposed giving it to a friend– I’ve forgotten whom. He thought to the last he would get well I do not think he was once pained by the thought of dying– it seemed only cruel to tell him– you know till almost the last we had hopes for him he always expressed strong christian hopes– he once spoke of the soldiers wickedness– said they could get along very well in health but when sick or wounded they would feel their need of something better– I think his hopes of Heaven were bright & strong. After I received your letter asking his feeling I tried in every way to draw them out but his mind wandered. I could not make him talk– the afternoon before he died a good army chaplain who had been preaching here to the soldiers came in to speak to him of Jesus.

Please don’t blame me for not telling him his situation I felt it would only make his heart ache with sad thoughts of leaving you– forgive me if I was wrong. I received a kind letter from Judge Ewing expressing kindest regard for your husband & his family. I have another small lock of your husband’s hair I saved one day when his hair was cut a few weeks since.

You kindly asked about my mother– she lives in Philadelphia– or rather she is boarding there, while I stay here– our native place is Providence, R.I.

Thank you for your kind interest in me– I wish there was something I could do to prove my earnest interest in your family– ’tis so pleasant to think that one day in Our Father’s happy home we shall all meet where there are no partings. My kind love to our little Douglass

This is not the first time the site has examined issues surrounding memento-mori and the use of images following death. You can read the story of Sergeant James Fegan here. He had an image exposed of himself and his deceased wife which his officer described as ‘a mixture of the grotesque, the horrible and the piteous.’ In another example of how images were used, see the story of John and Mary McKenna here. When John was killed at Gettysburg while serving in the 70th New York, his comrades wrote to tell Mary that ‘your likeness was buried with him.’ 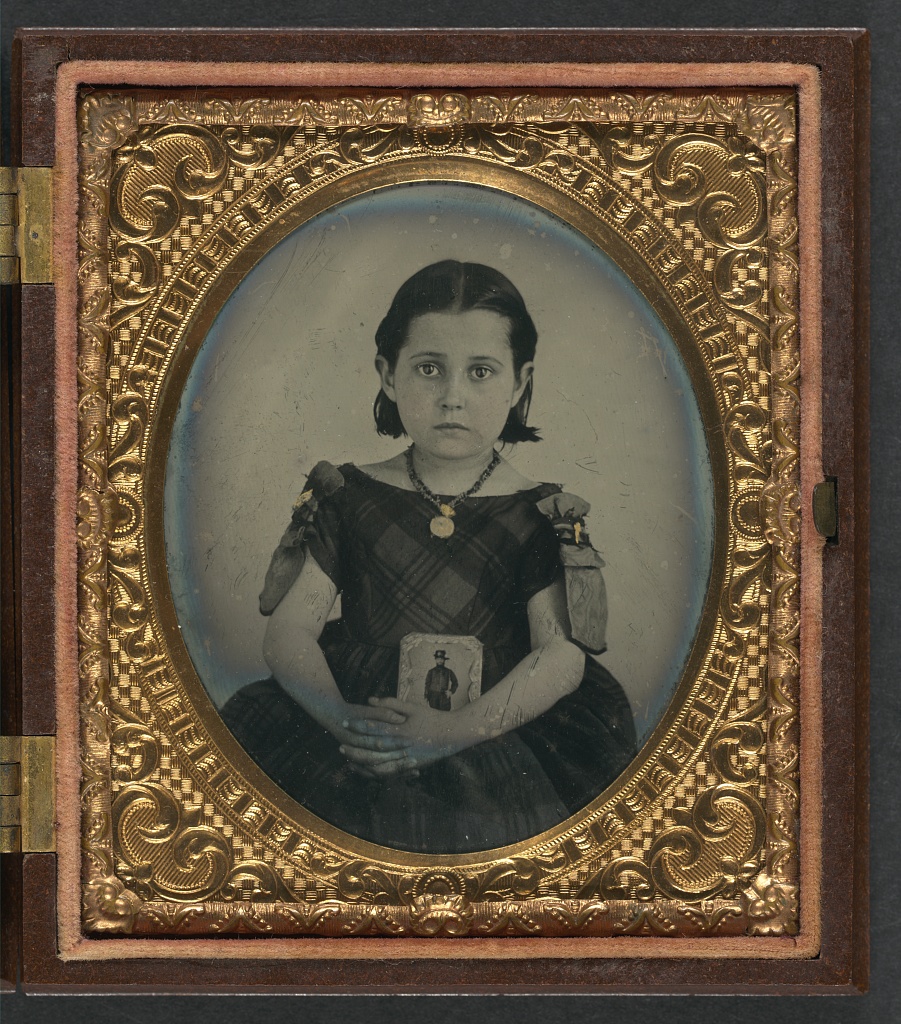