Increasingly many of the personal stories featured on the site are based on the contents of Federal Pension files. Having recently returned from the excellent Ulster-American Heritage Symposium at the University of Georgia, Athens- during which I had the pleasure to visit the Kennesaw Mountain battlefield- I thought it appropriate to have a look at the pension file of an Irishman who had served both Georgia and the Confederacy. It presents as an opportunity to highlight the types of information you can expect from Confederate pension files, and appropriately focuses on a veteran of the Atlanta Campaign. 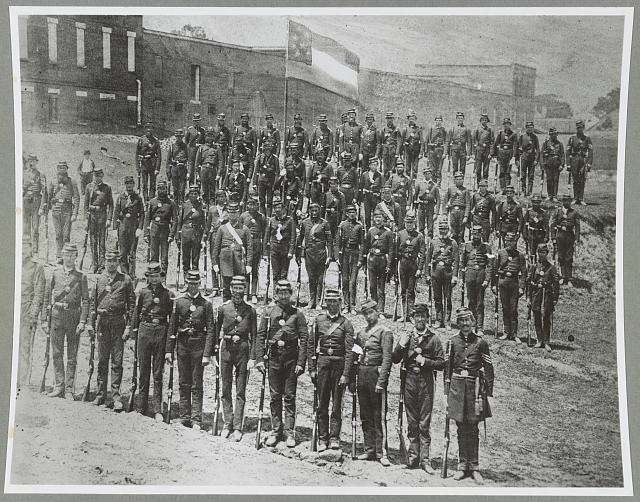 Unlike their counterparts who served to preserve the Union, Confederate veterans and their dependents did not become eligible for Federal pensions until 1958. However, a number of former Confederate states did offer pensions to former Rebels and their families, dependent on their disability and status as ‘indigent’- effectively someone who was destitute. These pensions were not provided by the state for which you served, but rather by the state in which you lived at the time of your application.

Towards the end of 1914 Benjamin Taylor Johnston- B.T. to all who knew him- was working as a coal miner in Texas. B.T. was just about to turn 69 when an accident in the mine ended his working career. According to the doctor, B.T.’s foot was ‘badly mashed’ in the incident, and given his age and the severity of the break it was deemed unlikely he would ever be entirely well again. The event placed B.T. in dire financial straits, and prompted him to apply to the state of Texas for a pension based on his Confederate service in order to support both himself and his wife Nancy. They had been married in Gordon, Georgia on 20th July 1876, but had been calling Texas home since 1889. In his application based on ‘indigent circumstances’- dated 22nd July 1915 and written from Strawn, Palo Pinto, Texas- he outlined his service as he remembered it, events which had taken place half a century previously:

I was born in Gallwag [Galway] Irland December 17 1845. I was raised in Georgia Hall County. I inlisted in the Confedrete Army in 1862 April 2. Evanes Batallion Sharp Shooter Company after receiving 3 more companys it was orginized in the 64 Regment of Harisons Brigade [64th Georgia Infantry].

I inlisted in Atlata GA. went to the coast of Florida in August in a scirmish near Pencicola I got slightly wounded I was sent to the hospitle at Savana GA. I was discharged there by order of Sectary of War through application of my mother on account of my minority. In Sep the same year I ran away from mother and went to Murphys Burr [Murfreesboro], I inlisted there in Nov. Stanifordsburne Miss Battrey [Stanford’s Mississippi Battery] after the Battle of Murphys Dec 31 to Jan 1 1863 at Stone River we fell back to the Tulahoma from there to Chatanooga after we fought the Battle of Chichnauga which was fought Sept. 19 and 20 of the same year. After our misfourtune at Missonary Ridge in Nov we fell back to Dalton GA. We stayed through the winter of 1863 and 1864 we fought Mill Creek Ridge and Rock Face Mountian on May 7 and 8 1864. From there we fell back to Resacca GA on Ostanolla River we fought on the 14 and 15 day of May 1864 late in the evening. On the 15 I was severly wounded in the right knee they sent me to the hospitle at Mongomry Alabama from there I was discharged and went home. On the 14 of July I enlisted in Edmonsons Calvery detach service [Georgia Militia] which was afterwards was Edmonsons Battalion I belong to Co. E of same after orgainising Capt Ramseys Company again. I got slightly wounded while crossing Chathoochie River.

In March 1865 I was detailed not transfered to General Findley escort and surrendered at Kingston Georgia on May 6 1865. Capt Findley had command of the detail which I surrendered with which was noted on my payroll. I was in the fighting from Murphysbur to Resacca Georgia,

The Battlefield of Resaca (Library of Congress)

B.T. claims to have been wounded while serving with Evans’ Sharpshooters in the five month period before they formed a part of the 64th Georgia Infantry (of which Evans became Colonel). B.T. is recorded as having enlisted in Atlanta on 28th May, becoming entitled to a bounty of $50 Confederate. Some of B.T.’s claims do not seem to be borne out by his surviving records. He is on the regimental roll of the 64th Georgia for July and August 1863, but was not present at the time of the next surviving roll in September and October 1864, having presumably been wounded while the regiment was serving in Florida the previous autumn. His presence with the 64th Georgia at this time would have prevented B.T. from being in many of the actions he describes with Stanford’s Mississippi Battery, such as Stones River. However, he does appear to have served with the Battery, at least for a time. In 1864 he is described on the Mississippian’s rolls as 18-years-old, with light hair, blue eyes and a fair complexion. A farmer by occupation, he was 5 feet 5 inches in height and was from Hall County, Georgia. B.T. was listed as having been absent without leave since 17th May 1864 (the 15th was when B.T. claims he was wounded at the Battle of Resaca), although he again appears on a receipt roll for clothing issued on 30th June 1864. B.T. himself claims that he became a member of Edmondson’s Cavalry on 14th July 1864. (2)

It is not possible to determine if the gaps in B.T.’s story are due to the loss of Confederate records or down to the Galwegian remembering things somewhat differently to how they occurred. Perhaps there were some elements of his time in the army that he wished to gloss over in favour of highlighting others. In anycase, there was little doubt that he was a bone fide Confederate veteran and as such B.T. received a pension from the state of Texas starting in December 1915. B.T.’s adventures were not yet over, however. In 1916 he decided to make his way from Palo Pinto to Birmingham, Alabama to participate in the United Confederate Veterans Reunion. B.T. never made it. On 13th May the Texas Pension Certificate Commissioner received the following somewhat cryptic telegram:

B.T.’s fellow veteran Larry Savage was quoting the Irishman’s pension certificate number. The reason behind his concerns were clarified in a follow up letter written by B.T. to the Commissioner of Pensions on 22nd May:

One day last week you got a telegram from 1 J Savage of New Orleans making inquiry about my soldure record. Now to explain this matter to you I will say that I was on my way to Birmingham to the reunion and being crippled I stoped at New Orleans and was selling the picture of Lee and his generals and the police arrested me and sayd the city did not allow business of that character carried on in the city hence the telegram of enquiry after they found out that I was an old confederate they wanted me to go to the home there but I did not except their proposition.

The fact that B.T. was attempting to make some extra money by peddling images of the great Confederate generals speaks much about both his pride and his efforts to leverage his veteran status in order to earn a living. B.T. narrowly escaped the New Orleans home and returned to Strawn, presumably having missed out on the reunion. He died at his home of apoplexy on 6th September 1923 at the age of 77; his widow Nancy subsequently sought financial support. Although far less numerous than the Federal pension files, there is nonetheless much to be learned from analysis of Irishmen and their family’s in the Confederate files- particularly those who fell on hard times. It seems likely given B.T.’s year of birth and the probable date of his emigration to Georgia that he and his family were Famine-era emigrants. The extremely hard life he appears to have led across Georgia and Texas, encompassing his Civil War service, should be regarded as part of a continuation of what is Ireland’s transnational Famine legacy.