Imagining the Horrors of Death: An Irishwoman Learns of Her Husband's Death at Gettysburg

Imagining the Horrors of Death: An Irishwoman Learns of Her Husband's Death at Gettysburg

The battlefields of the American Civil War claimed thousands of Irish Famine emigrants. The families of some were fortunate, in that comrades took the time to write to them of their loved one’s final moments. But these letters did not always spare grieving relatives the gruesome imagery of war. Thankful as they must have been to receive them, one wonders to what extent the imagined final moments of husbands, sons and brothers were replayed and visualized in the minds of those left behind. Such may well have been the case for Mary Clark, from Co. Westmeath, when she received word on how her husband had lost his life on the slopes of Culp’s Hill, Gettysburg. 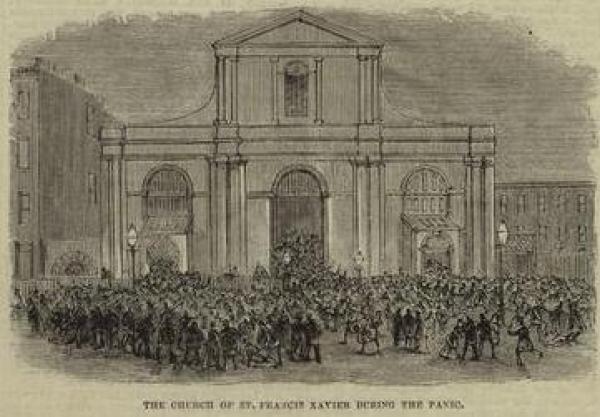 John Clark and Mary Farrell were married in Co. Westmeath on 31st December 1848. At the time John was around 23, Mary around 21. They were among the hundreds of thousands of Irish people who left the country during the Famine-era to head for a new life in the United States. It was in New York that they started their family, and the couple would eventually go on to have five children; Michael (b. 11th March 1854), John (b. 25th January 1856), Catharine (b. 1st February 1858), Mary (b. 5th January 1860) and Ellen (b. 27th December 1861). All bar one of the children were baptized in New York’s St. Francis Xavier’s Church on 16th Street in Manhattan. John and Mary are recorded on the 1855 Census with their one-year-old Michael, living in the 15th Ward. At that time John was employed as a laborer. By the outbreak of the Civil War, their home was 148 West 18th Street; John was by now working as a hostler. (1)

The part of West 18th Street on which the Clarks lived, as it appears on Google Street View.

John Clark was 35-years-old when he mustered in as a private in New York on 24th August 1861. He became a member of Company B of the 65th New York Infantry, the “1st U.S. Chausseurs” on 1st September that year. John was described as 5 feet 6 inches in height, with dark brown eyes, a dark complexion and dark hair. When he marched off to war Mary was 5 months pregnant with the couple’s fifth child, Ellen, who would be born that December. It is unclear if John ever had an opportunity to see her. A little more than a year and a half later he and the 65th New York– part of Shaler’s 1st Brigade, 3rd Division of the 6th Corps– marched onto the Gettysburg battlefield. On the evening of the 2nd July the regiment was held in reserve on the left, but at 8am on 3rd they were ordered to the army’s extreme right. Their function was to support General Geary’s position on Culp’s Hill. As the Confederates attacked, John and his comrades were directed to form a reserve, and duly “took a sheltered position in rear of a piece of woods, beyond which the action was then progressing.” The 65th New York would never be called forward into direct combat from this location, near where its monument stands on the Gettysburg battlefield today. As a result, the unit’s Gettysburg casualties were extremely light. But no matter where you are positioned, battlefields are deadly places. So it proved for John Clark, who met a grisly end on Culp’s Hill as he awaited his orders to advance. His fate was described in two letters written to Mary by men of the regiment. (2) 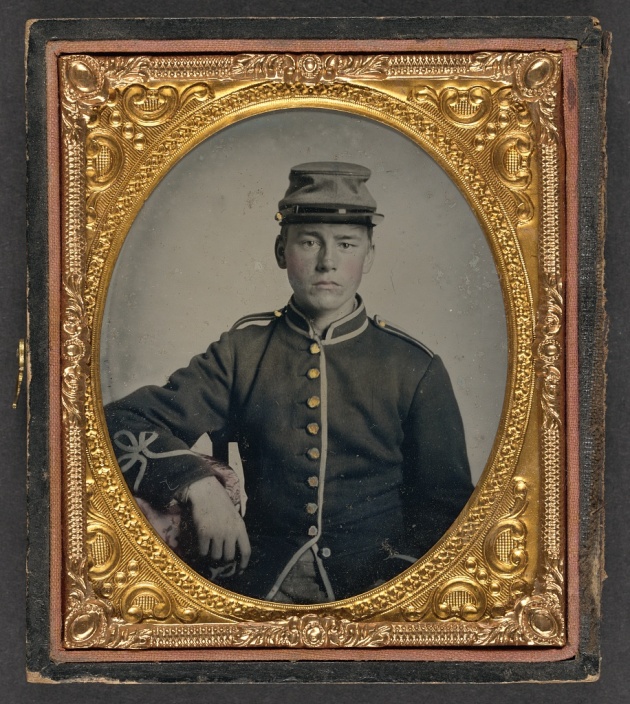 A young soldier dressed in Chausseur uniform, possibly a member of the 65th New York (Library of Congress)

Owing to the absence of the officer in command of Co “B” I will endeavor to answer your letter regarding you husbands death. Corporal John Clark Co “B” 1st U.S. Chausseurs was struck with a piece of shell on the morning of the 3d day of July at 11 o’clock. The regiment was laying down awaiting the order to advance to the front when a shell exploded over the Reg’t killing him and wounding another man by his side.

One of his comrades carried him off the field to the Hospital and if he said any thing to him I cant say as he was wounded soon after and while on his way to join his Company and no word has been heard from him.

John’s own officer is now in New York for conscripts with his Head quarters at 274 Canal Street in the store of the Water Furnace Company. I will write him a letter and give him you direction so he can call and see you if he has time.

You would do well to call and see him and he probably may assist you in getting the relief money.

I came out in the same Company with your husband as a Sergeant and I have had good chances of knowing the man and I but speak the feelings of all his comrades in saying that a better soldier, companion or friend was not to be found in the Regiment and all his comrades deeply sympathize with you in the loss of such a husband– If there is anything his comrades can do they wish me to say they are at your service and if any further information is needed I will cheerfully grant it.

A sincere friend of you late husband & one who sincerely sympathizes with you in your loss,

William J. Haverly was 26-years-old when he was enrolled as a Sergeant in Company B on 3rd August 1861. He was discharged for disability holding the rank of Captain on 15th November 1864. (4)

274 Canal Street, the site of Brown’s Water Furnace Company, as it appears today. It is likely that Mary Clark visited Lieutenant Raymond here in 1863 to find out more about her husband’s death at Gettysburg. Promoted Captain to date from 1st July 1863, Raymond was dismissed on 7th March 1864 for being absent without leave.

The second letter was sent by Louis Thirion, a Pennsylvania-born jeweler, who had enlisted at the age of 29 in Company H on 20th August 1861. (5)

It is with regret I announce to you that your husband was killed in the Battle of Gettysburg the 3rd of July at about 11 O’clock. He lingered for about 4 hours when death put an end to his sufferings. He was universally beloved in the regiment, but more particularly in our company where he was better known. By his death the regiment loses the services of one whose place it will be difficult to fill. In passing this tribute to his memory I but re-echo the sentiments of the entire command. I sincerely sympathize with you in the irreparable loss you have sustained, whereby you have lost a kind husband, and your children an affectionate father. May his soul rest in peace. Our Lieutenant whose is name is George S. Raymond is in your city detailed to bring on conscripts. I think you will find him at the Howard House or somewhere in that vicinity. He can give you more information than I possibly can give you on paper.

Your husband was laying on his back calmly talking of the “Union” when a fragment of a shell struck him nearly taking both legs off.

Wishing your sorrows may be alleviated by the consolation of knowing he died a glorious death.

It is apparent from both letters that the Westmeath man was very popular among the regiment. Evidently Mary, having learned of John’s death, had written seeking further details regarding his demise. It is not hard to imagine her turning over the image of  her husband’s horrifying and agonising final hours in her mind. Although Thirion in particular gave her explicit detail as to how John had been wounded, it is interesting to note that the Sergeant also related that John had been “calmly talking of the Union” when he was struck. Whether this was the truth, or whether he added it to provide more meaning for his sacrifice, is unknown, but Thirion’s hope that Mary would be consoled by John’s “glorious death” implies it may well have been the latter. John Clark’s body was identified and he was buried in the New York plot at Gettysburg National Cemetery. How Mary fared with her five young children goes unrecorded, but it is notable that when she applied for an increase to her pension in 1865 based on her minor children, only four were listed– the absent child was the couple’s fifth, their young daughter Ellen, who had been born when her father had marched away to war. (7)